According to Realmeter, the rating gained 3.6 percentage points on-week to 45 percent. It conducted the phone survey of 2,505 people nationwide, aged 19 or older, for the five business days last week. The margin of error is plus or minus 2 percentage points.

It marked Realmeter's first weekly poll of Moon's approval rating since Cho stepped down last Monday after months of controversy over whether he's suitable for the Cabinet post.

Moon's rating rose to 45.5 percent in a three-day survey through Wednesday but edged down later amid a series of news reports negative to the ruling bloc, which include an inter-Korean World Cup qualifier football match in Pyongyang held with no spectators and a dispute over a medical report submitted to the prosecution by Cho's indicted wife, Realmeter said. 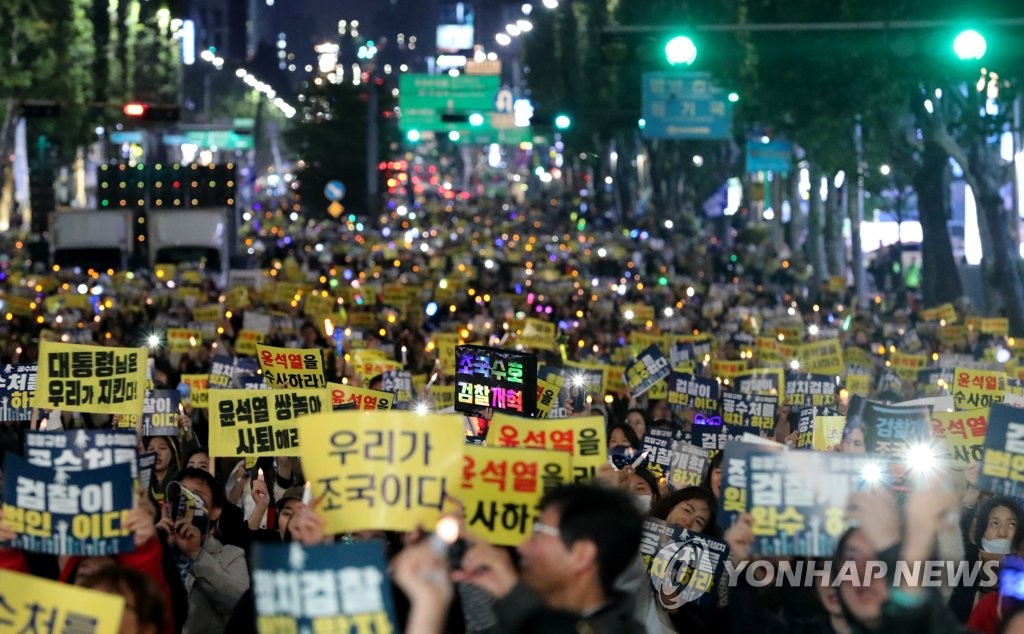 The proportion of people critical of Moon dropped 3.8 percentage points to 52.3 percent from a week earlier.

Even in the wake of Cho's departure, political wrangling has continued here over prosecution reform measures. Over the weekend, separate massive protest rallies were held in Seoul for and against Moon's reform drive.

Another Realmeter poll showed that a majority of South Koreans are still in favor of creating a special unit, detached from the prosecution, to investigate corruption among high-ranking government officials.

The ruling party's push for the unit has emerged as a hot-button issue since Cho's resignation. Its leader, Rep. Lee Hae-chan, has vowed every effort to get a related bill passed in the National Assembly at an early date.

The LKP is strongly opposed to the move, claiming it reflects the Moon administration's attempt to put a new, powerful law-enforcement team under its control for political purposes.

In the survey last Friday of 501 adults across the nation, 51.4 percent backed the creation of such an agency and 41.2 percent were against it, Realmeter said. The margin of error is plus or minus 4.4 percentage points.

A similar Realmeter poll in March showed that 65.2 percent were supportive of the plan, with only 23.8 percent disapproving of it.