He highlighted the political wrangling over some key policy goals supported by many people, including prosecution reform, and the ensuing conflict among citizens.

As a specific example, the president cited a controversial plan to create an independent unit to investigate corruption by high-ranking government officials.

"Now that the general elections draw near, I think it's possible that political conflicts will increase and lead immediately to conflicts among the people," he said during a Cheong Wa Dae meeting with religious leaders. The elections are slated for April 15, 2020.

It was Moon's first group meeting in eight months with representatives from the nation's major faiths, which include Catholicism, Protestantism and Buddhism.

The president recalled his first invitation for those religious figures to Cheong Wa Dae in 2017.

At that time, military tensions were running high due to North Korea's nuclear and missile tests, and Moon appealed to the religious circles to make up for politics by fostering national integration to handle the North Korea issue and other difficulties facing South Korea.

"Now, nearly two years have passed. In terms of national unity, we have made our own efforts for cooperative politics and implemented inclusive policies in many fields. But there seems to be little progress," Moon said during the luncheon meeting.

In recent months, the Cho Kuk issue has sharply split the nation. On weekends, huge street rallies were held in Seoul for and against Moon's pick of Cho as justice minister. Cho's primary mission was to spearhead the drive to reform the state prosecutors' office, which has been accused of having too much power.

Critics of Cho vented their fury over reported perks and alleged irregularities involving his family, including over his daughter's schooling and an investment by his wife in a private equity fund suspected of dubious operations.

Cho eventually stepped down last week, saying he wanted to reduce the political burden for the president and to spend more time with his family as they had the "toughest time" of their life amid an intensive probe by prosecutors. He also mentioned his wife's worsening health.

The Cho case has effectively become an opportunity to raise the level of fairness in South Korean society by a notch, according to Moon.

It is problematic, however, that there is only political strife over specific methods but a lack of productive discussions, he stressed.

"I will make more efforts myself first as the president for national unity and harmony. But I would like to say that religious leaders need to play a bigger role," he said.

Meanwhile, Moon reaffirmed his view on an issue relating to sexuality after a participant raised it during the session, according to Cheong Wa Dae spokesperson Ko Min-jung.

With regard to same-sex marriage, the former human rights lawyer was quoted as saying that public consensus is necessary in South Korea but a sexual minority shouldn't be subject to social persecution.

Last Friday, Moon invited the heads of foreign diplomatic missions in Seoul and their spouses to a Cheong Wa Dae garden reception. Among the attendees were openly gay New Zealand Ambassador Philip Turner and his husband, Hiroshi Ikeda. 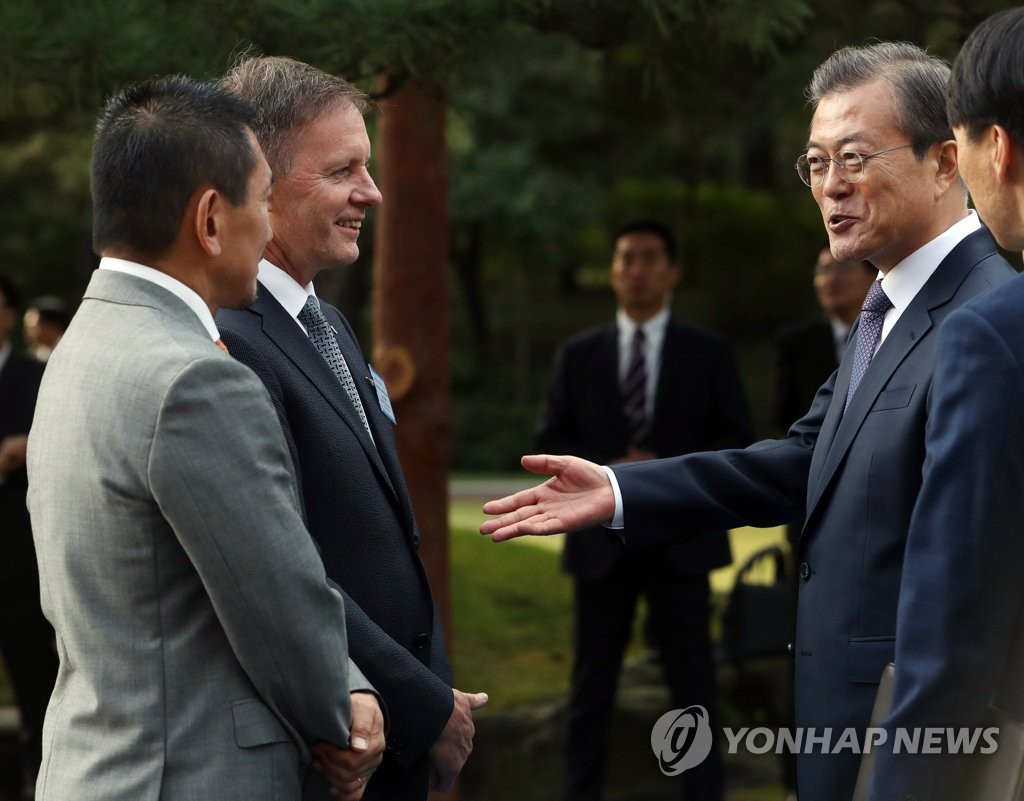