Earlier in the day, Lee arrived in Tokyo for a three-day trip. The trip's itinerary includes a meeting with Japanese Prime Minister Shinzo Abe on Thursday.

The visit appears to carry significance related to finding ways to improve the bilateral ties strained by Japan's protest against the South Korean top court's 2018 rulings on Tokyo's wartime forced labor and its subsequent move to impose export curbs against Seoul.

As his first official engagement, Lee attended a ceremony by Emperor Naruhito to formally proclaim his enthronement. South Korean Ambassador to Japan Nam Gwan-pyo also participated in it. 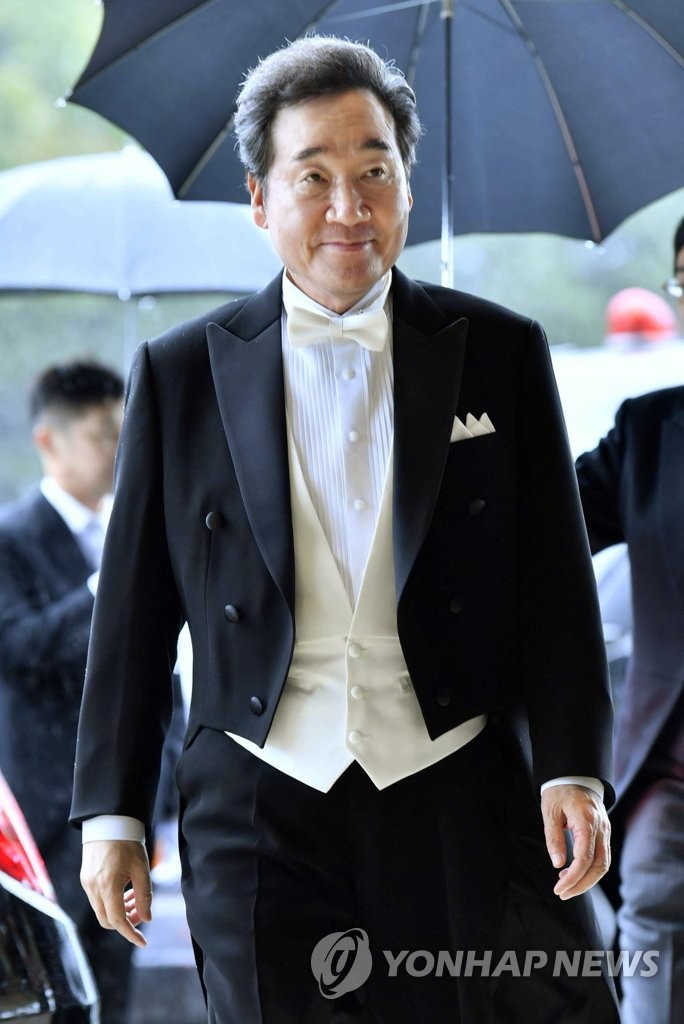 Lee's attendance reflects the government delivering a congratulatory message over its neighbor's national event, according to his office.

"Separately from tensions over the history issue, the government is expressing its willingness to develop the Seoul-Tokyo ties in a future-oriented manner," it added.

In a court banquet in the evening, Lee told Naruhito that President Moon Jae-in has written a personal letter to the emperor.

Seoul-Tokyo ties fell to one of the lowest points following the Korean Supreme Court's 2018 orders for Japanese firms to compensate Korean victims of Tokyo's forced labor during its 1910-45 colonial rule of the Korean Peninsula.

Tokyo has reacted angrily to the Seoul court's decisions, claiming that all reparation issues linked to its colonial rule were settled in the 1965 state-to-state pact on normalizing diplomatic relations.

Amid heightened diplomatic tensions, the highlight of Lee's trip will be his planned meeting with Abe. It would be the first high-level talks between the two nations since late 2018.

Experts hope that Lee's trip will pave the way for the two nations to mend their soured relations and set the stage for President Moon and Abe to hold a summit this year.

His office confirmed Lee will deliver Moon's letter to Abe on Thursday.

"I will discuss ways to facilitate dialogue between Seoul and Tokyo during meetings with Abe and political and economic leaders," Lee said on social media before his departure for Japan.

Lee said his trip will help the two nations take a "step forward" in improving relations, during his meeting with Nagamine Yasumasa, Japan's top envoy to South Korea, at Seoul Air Base, just south of Seoul, before departure.

Experts, however, cautioned against excessive optimism about the outcome of Lee's meeting, given a sharp difference on stances by Seoul and Tokyo over key contentious issues.

An official at Seoul's foreign ministry said it does not appear easy for the two countries to find a solution to the ongoing row in a short period of time.

During the trip, Lee plans to meet a wide range of politicians and business leaders, as well as young Japanese people.

Lee is scheduled on Wednesday to meet Natsuo Yamaguchi, chief of the Komeito party, junior coalition partner of the ruling Liberal Democratic Party; Yukio Edano, head of the Constitutional Democratic Party; and former Prime Minister Yoshiro Mori, president of the organizing committee for the Tokyo 2020 Olympics.

Earlier in the day, Lee visited the monument honoring Lee Soo-hyun, a Korean man who died trying to rescue a drunk Japanese man who had fallen onto the subway tracks in Tokyo in 2001. The late Lee is regarded as a symbol of friendly ties between the two nations.

A town-hall meeting is scheduled for Wednesday with around 20 Japanese college students to discuss bilateral relations between the two countries. 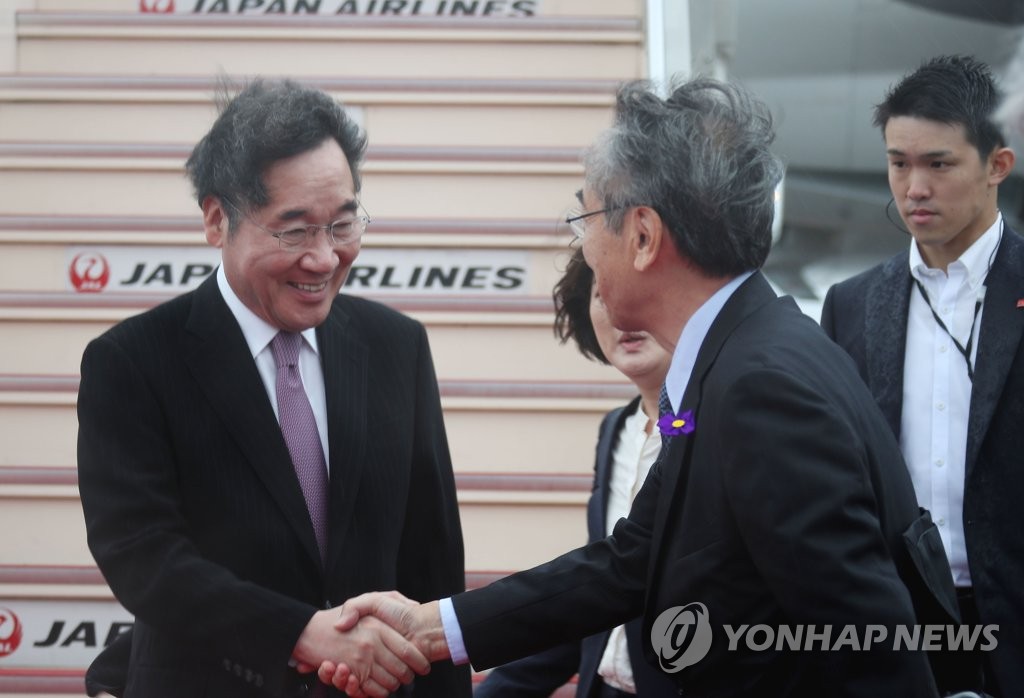