SEJONG, Oct. 22 (Yonhap) -- South Korea's finance minister said Tuesday the government will hold final discussions in the coming days on whether to maintain developing-country status amid a looming U.S. deadline.

Hong Nam-ki did not provide a specific time frame on when the meeting will be held.

South Korea has faced a dilemma over the issue as U.S. President Donald Trump is seeking to make sure that self-declared developing countries do not take advantage of the benefits that come with the status.

The U.S. has proposed that the WTO strip countries of developing country status if they meet certain criteria -- being members of the Group of 20 advanced economies, being members of the Organization for Economic Cooperation and Development (OECD), being high-income countries as classified by the World Bank and taking up at least 0.5 percent of total global trade.

South Korea meets all four of the criteria, which could undermine its efforts to maintain its status. 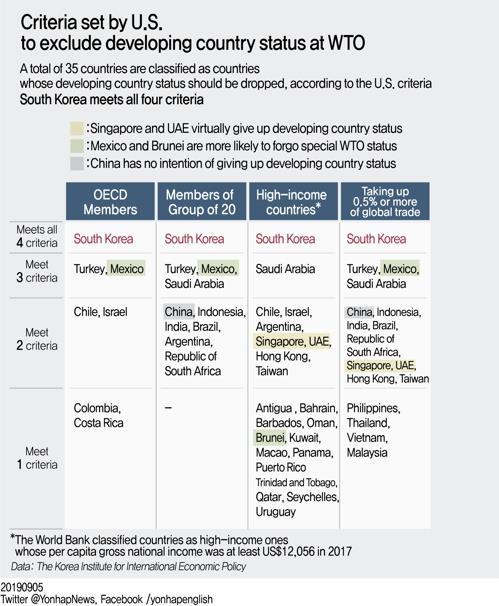 Trump has also said if no substantial progress is made in overhauling the rules of the Geneva-based trade body by mid-October, the U.S. will no longer treat as a developing country any WTO member Washington says is not one.

The issue of the developing country privileges is also about future multilateral negotiations, meaning that South Korea's agricultural subsidies and its agricultural tariffs won't be affected even if Seoul decides to forgo the status.

However, local farmers have voiced their opposition to a possible move to drop the status.

Currently, South Korea imposes a 513 percent tariff on imported rice for quantities outside the quota of 409,000 tons of annual rice imports from the U.S. and four other countries under the system of tariff-rate quotas meant to provide minimum market access.

South Korea's total agricultural subsidies largely depend on the value of agricultural output in a given year and the ceiling hovers around 11.49 trillion won.

Separately, Hong called for a full implementation of the budget in the fourth quarter in a move to boost the country's slowing economy.

The comments came amid concerns that South Korea may miss its growth target this year due in part to slowing exports.

South Korea's exports fell 11.7 percent on-year to US$44.7 billion in September, extending their on-year decline to a 10th consecutive month due to weak prices of semiconductors and the yearlong trade row between the United States and China.

The International Monetary Fund recently lowered its growth forecast for South Korea's economy this year to 2 percent from its previous outlook of 2.6 percent amid a global economic slowdown.

Hong has said the government will mobilize all policy tools to achieve economic growth in the 2 percent range this year.