The measure came after the constant increase in the number of confirmed ASF cases among wild boars near the inter-Korean border and amid speculation that the highly contagious virus may have traveled from the North, which reported its own outbreak in late May.

So far, 12 wild boars found dead near the border have tested positive.

Following the first two-day hunting operation last week, the military began a similar operation earlier in the day by sending 48 teams, each comprising around 12 civilian hunters and military officers, to Cheorwon, Hwacheon, Yaanggu, Inje and Goseong in Gangwon Province to hunt down the animals with guns and traps until early Thursday, according to the ministry.

Some 2,097 service personnel and 73 pieces of equipment were also mobilized on Tuesday to support quarantine efforts, the ministry said, adding that the government used two helicopters to spray disinfectant over the Demilitarized Zone (DMZ) separating the two Koreas.

The virus is harmless to humans but is highly contagious and fatal for pigs. There is no cure or vaccine, and the only known way to prevent the disease from spreading is the culling of affected livestock or animals likely to have been exposed to the virus. 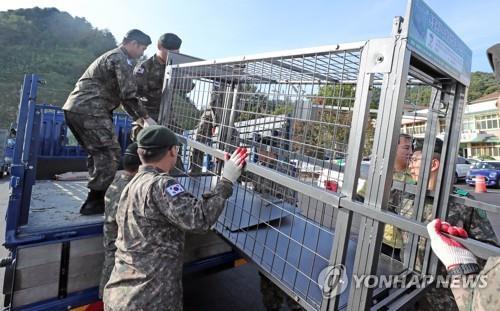