SEOUL, Oct. 22 (Yonhap) -- The number of foreign tourists visiting South Korea in September rose over 14 percent from a year ago to reach about 1.46 million, official data showed Tuesday.

According to the data released by the Korea Tourism Organization (KTO), 1,459,664 foreigners visited South Korea last month, marking a growth of 14.2 percent from the same month last year. 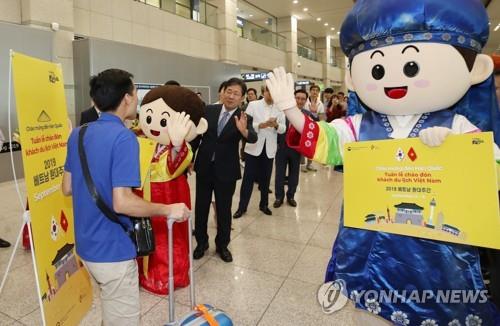 Visitors from Japan increased 1.3 percent on-year in September, but the growth rate noticeably slowed due to the aftereffects of strained diplomatic relations between Seoul and Tokyo over historical issues and bilateral trade conflict.

Visitors from other Asian countries and the Middle East went up 9.2 percent last month. Increased cruise ship visits and flight services led to a spike in the number of Taiwanese visitors. By contrast, visitors from Hong Kong fell 7.5 percent due to its political instability and consumption slump.