SEOUL, Oct. 23 (Yonhap) -- Sweden plans to send invitations to the United States and North Korea within the coming weeks for another round of their nuclear negotiations in the European country, its special envoy for Korean Peninsula affairs said Wednesday.

Kent Harstedt also expressed his "cautious optimism," stressing Pyongyang has not closed the door yet for the dialogue process although it declared the no-deal working-level talks with the U.S. in Sweden earlier this month a "breakdown."

"We will issue new invitations to the two sides for new meetings at the time agreed upon by the two parties," the envoy told a press conference in Seoul.

"It is of course up to the two parties to decide the timing of such a meeting, but we will remain proactive from the Swedish side to encourage them to meet," he added, calling the dialogue process a "historic window of opportunity." 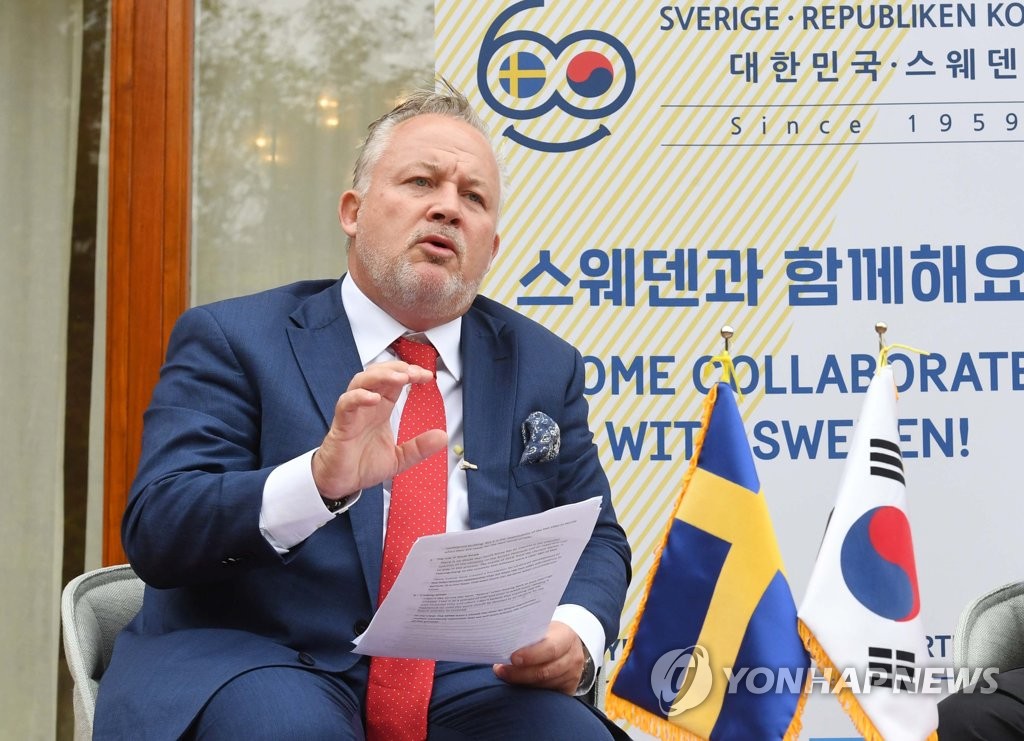 Immediately after the U.S. and the North concluded their latest talks on the outskirts of Stockholm on Oct. 5, Sweden invited them to meet again in two weeks' time. Washington accepted it, but Pyongyang has not responded.

Harstedt based his cautious optimism on his assessment that there appears to be a will from both the U.S. and the North to move forward the dialogue process, which he says serves as a process of "understanding each other better."

"We have to bear in mind that this is very sensitive and complicated matters to discuss if you don't know each other ... So I still believe this is part of understanding each other better," he said while commenting on the latest talks between Washington and Pyongyang.

"I think it is good that both sides expressed themselves afterwards. Again I also need to say that DPRK hasn't closed the door for continuation of this important (meeting)," he added. DPRK stand for the North's official name, Democratic People's Republic of Korea.

Despite Pyongyang's negative statements on the Sweden talks, Harstedt cast the meeting as "good, full" and uninterrupted discussions.

"It was also an opportunity in a good atmosphere with integrity. I am to say we are quite happy that that meeting took place in a way that wasn't disturbed by any way," he said.

"It was a good meeting, it was many hours, and they had the opportunity to listen to each other and to have a dialogue together and were not interrupted. This was a very important message I think," he added.

The envoy also stressed the role of Sweden as a "facilitator" or "icebreaker," while pointing to his country's long "history of trust" with both Washington and Pyongyang and decades-old ties that Sweden has cultivated with both Koreas.

Sweden has embassies in both Washington and Pyongyang. During the Cold War conflict on the peninsula, it sent a field hospital that treated more than 2 million patients. In addition, the country has long had a military presence in Korea as part of the Neutral Nations Supervisory Commission, an impartial observer of the implementation of the armistice agreement that halted the Korean War.