SEOUL, Oct. 30 (Yonhap) -- "Hi everyone," a middle-aged woman donning an emerald-colored ballroom gown and a fancy updo hairstyle chirped at hundreds of middle-aged and elderly women.

"Hi," the excited crowd echoed back.

Hundreds of students at Ilsung Middle and High School and their families gathered this week for the annual English speech contest the school has hosted for nearly two decades.

The school, located in western Seoul, is an all-woman academic institution that specializes in education for women who are studying belatedly due to various reasons.

Roughly 1,000 students whose average age is 63, including one student who is 87 years old, study middle school and high school courses at the school, which is officially recognized as an educational institution by the government.

"We provide education to women who missed out on learning due to poverty or the fact they are women ... A wise person once said, 'Not learning is like walking a dark night road.' Please get on the train of learning and get rid of the frustration and sadness that you could not share with anyone and enjoy the bright and energetic joy (of learning)," the school's website says.

Established by people from North Korea's northernmost province of North Hamgyong, it first started off as an evening course for laborers in 1952 during the 1950-53 Korean War.

Over 56,000 students have graduated in the past six decades, including those who made headlines as the country's most elderly college entrance exam applicants.

As its internet domain "ajumma school" suggests, most of the students are ajumma, the Korean term for middle-aged and elderly women that have come to symbolize next-door aunties and grannies. 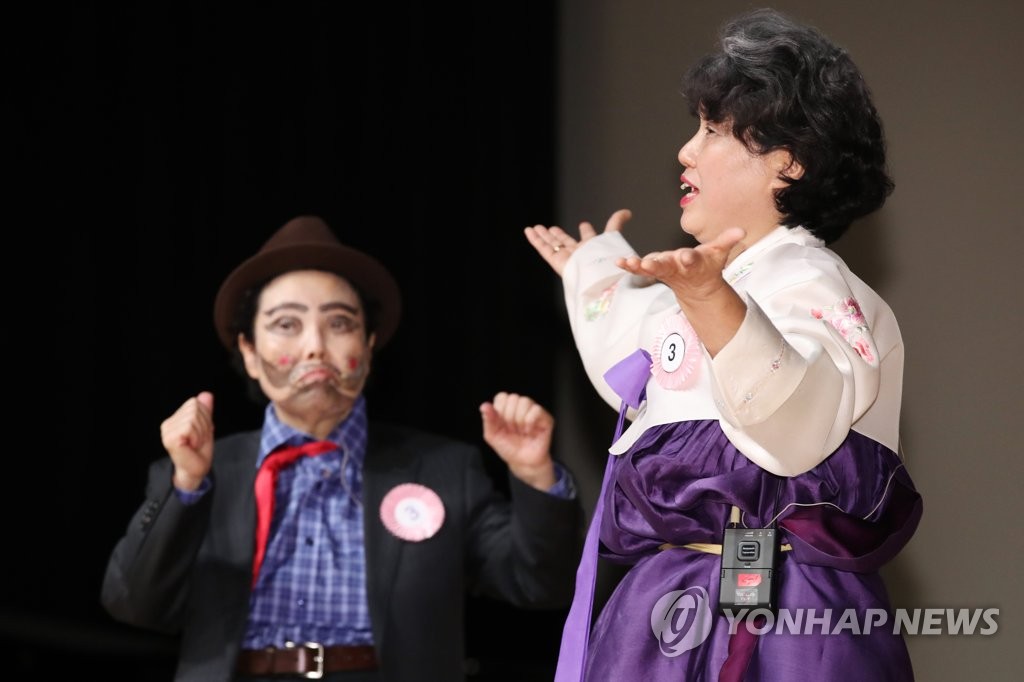 Tuesday's event was the latest in the school's effort to provide an opportunity for students to enjoy school life and showcase what they've learned.

Some students addressed the fear they've overcome while preparing for the contest, while one contestant recited a famous speech by BTS leader RM that inspired her.

"And maybe I made a mistake yesterday but yesterday's me is still me. Today, I am who I am with all of my faults and my mistakes. Tomorrow, I might be a tiny bit wiser and that'll be me too," said high school freshman Park Du-rye.

"So let's all take one more step. We have learned to love ourselves so now I urge you to speak yourself. I would like to ask all of you, what is your name? What excites you and makes your heart beat?" Park said as she paused emotionally.

Park Sung-im spoke about how she and a classmate overcame stage fright by "imagining that they (the audience) are wearing silly masks or sitting in their underwear."

"I've always been interested in learning English, but this contest really helped improve my skills," Park, a middle school freshman, said after winning the grand prize for the speech.

"My next goal is to travel the world. I'll go alone, not on a guided group tour, but by myself and speak to foreigners," the 56-year-old said, stressing that groups tours are definitely not on her list. 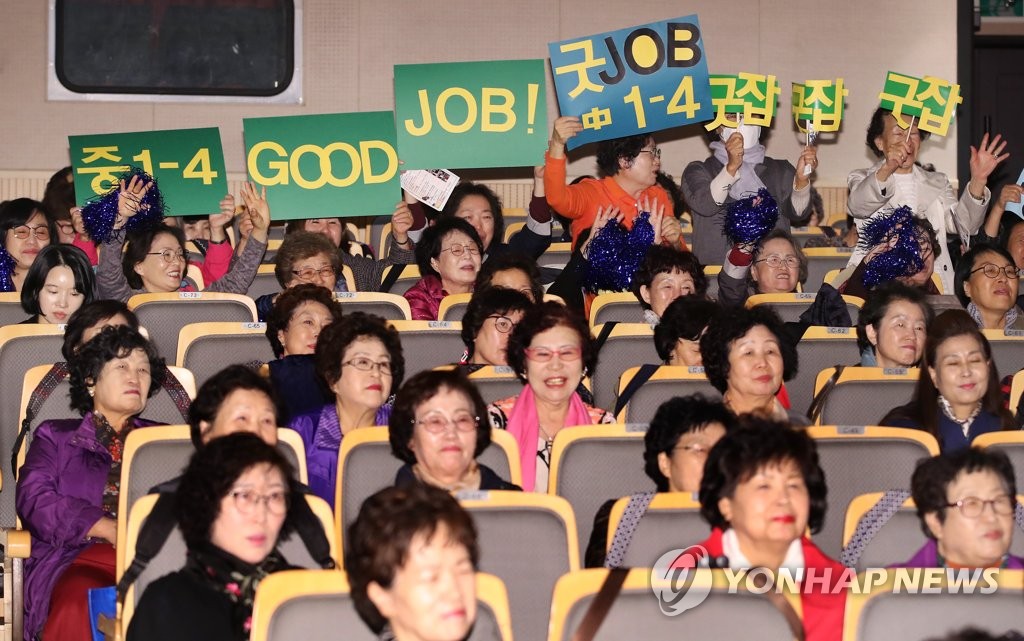 For some, learning English is not just a matter of learning a foreign language but a way of embracing confidence.

Yoon Kyung-hee, a senior at the school's high school course, was one of them.

She teamed up with her classmate Lee Ryeo-hee to speak about the need to use "eco bags" instead of plastic bags to save the Earth.

The best friends prepared for nearly two months for a 2-minute speech on the environmental issue. A hard copy of their script, marked with highlighters, folded in some places and stained with coffee, showed the effort they put in.

"We practiced nearly everyday, in front of our classmates and in front of our families. At first, English was completely out of my comfort zone, but now I can proudly say I've learned quite a lot," the 56-year-old said.

"I grew up in a family of five kids. Because I was very introverted and didn't stand out compared to my siblings, my parents didn't think of sending me to high school," Yoon said.

"I learned about this school and at first was embarrassed to study at a late age. But the experience of speaking in front of so many people and practicing English made me feel that I can do anything. Now, I'm not embarrassed at all."

"There are many reasons students are studying belatedly. Some couldn't go to school because of family circumstances, and some were not healthy enough. But now the students are learning a lot and enjoying the sisterhood," Lee added. 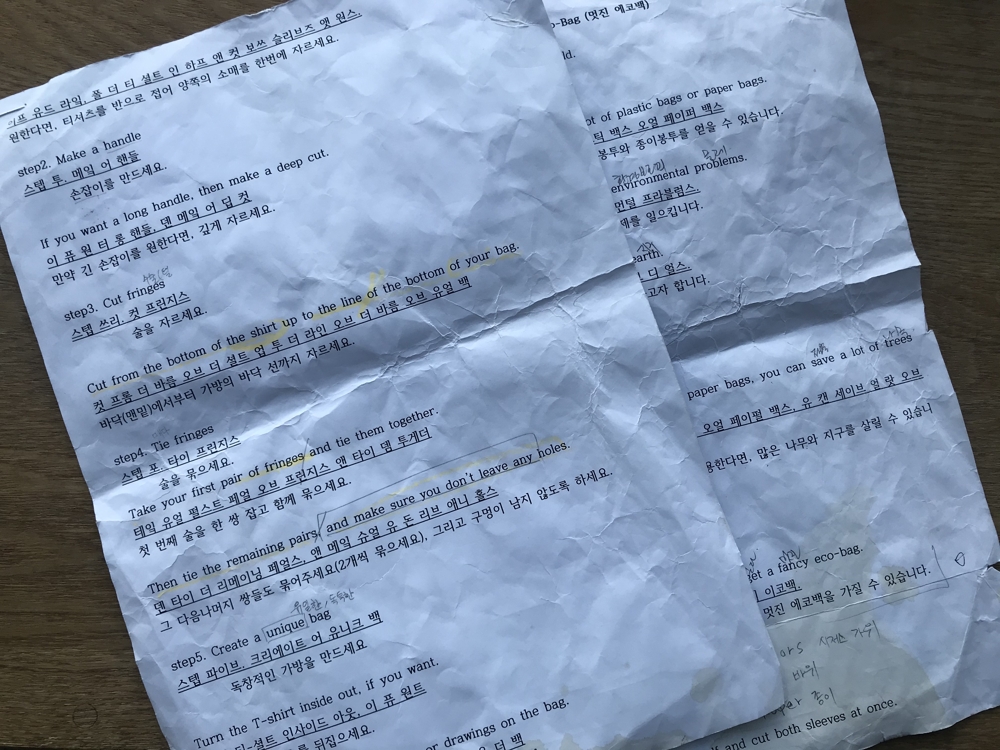 At the end of the day, it's all about living life to the fullest for the ajumma, who are seasoned in life but novices in learning.

Contestants and the audience roared out in laughter, sang along and giggled throughout the event that lasted nearly three hours.

"Was it fun? Did you have fun? Were you happy?" school principal Lee Sun-jae asked the students after awarding the winners.