SEOUL, Nov. 4 (Yonhap) -- Major South Korean listed firms are expected to see their profitability turn for the better in 2020 on a rebound in global chip demand and low material costs, a market tracker said Monday.

The combined operating profit of 279 listed companies is forecast to reach 165.8 trillion won (US$142 billion) next year, up 26 percent from this year's estimate, according to FnGuide.

Their net profit is projected to spike nearly 30 percent on-year to 122.2 trillion won in the coming year, with sales predicted to gain 5.8 percent to 2,030.8 trillion won.

The firms are businesses for which three or more local securities companies have put forward earnings forecasts.

Out of the total, 255 businesses are forecast to post more operating income next year or chalk up levels similar to this year. 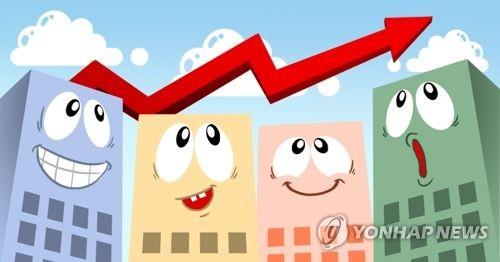 Market analysts attributed the expected improvement to a brisk semiconductor industry and low prices of raw materials, combined with those firms' weak results for this year.

"Improved corporate earnings for next year will be driven by a recovery in global demand for chips and better profit margins stemming from low material costs," Lee Eun-taek, a strategist at KB Securities Co., said.

According to FnGuide, tech behemoth Samsung Electronics Co.'s operating profit is expected to jump 36 percent on-year to 37.3 trillion won in 2020, with its bottom line soaring 33 percent to 29.3 trillion won.

Operating income of chip giant SK hynix Inc. is likely to shoot up 134 percent to 6.8 trillion won and its net profit is estimated to soar 113 percent to 5.1 trillion won.

Yet some analysts struck a cautious note, saying those major companies may face growing uncertainty in the latter half of next year.

"Local firms are likely to pull off better performances next year thanks to a reduction in the extent of slowing exports," Seo Sang-young, an analyst at Kiwoom Securities, said. "Yet volatility is expected to grow late next year due to jitters over a global economic slowdown and escalating political uncertainty."
(END)