SEJONG, Nov. 8 (Yonhap) -- South Korea said Friday it has agreed to hold a second round of talks with Japan later this month in their latest attempt to resolve the on-going trade row over Tokyo's export restrictions at the World Trade Organization (WTO).

Chung Hae-kwan, director-general of multilateral and legal affairs at the Ministry of Trade, Industry and Energy, will sit down for the discussion with his Japanese counterpart Junichiro Kuroda on Nov. 19 in Geneva, according to the trade ministry here.

"We will make utmost efforts to try to quickly resolve Japan's export restrictions," the ministry said in a statement.

The talks are part of a dispute settlement process under rules of the WTO.

Last month, the two failed to reach an agreement in their first talks in Geneva in connection with Seoul's complaint with the global trade body over Tokyo's export curbs.

In July, Tokyo imposed tighter regulations on exports to Seoul of three materials -- resist, etching gas and fluorinated polyimide -- that are critical for the production of semiconductors and flexible displays. Japan later removed South Korea from its list of trusted trading partners.

Japan has said that the regulations were necessary because South Korea operates a lax control system on the trade of sensitive goods, a claim strongly denied by Seoul.

Earlier this week, South Korean President Moon Jae-in and Japanese Prime Minister Shinzo Abe agreed to resolve pending issues via dialogue during their meeting in Bangkok in their first one-on-one talks in more than a year amid frayed ties.

The bilateral consultation is the first step of a WTO dispute settlement. If the two fail to narrow their differences within 60 days, the WTO Dispute Settlement Body will establish a panel to look further into the case. 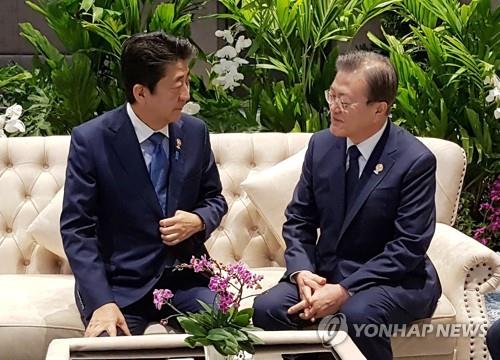