SEOUL, Nov. 8 (Yonhap) -- President Moon Jae-in called on his government Friday to mobilize "all effective measures" for full-scale reform to enhance the overall level of fairness in South Korea, especially in the legal circles, as he chaired the first session of an inter-agency anti-corruption council since the outbreak of the so-called Cho Kuk scandal.

"Anti-corruption reform and a fair society are the mission of our government," Moon said at the start of the Cheong Wa Dae session, with 33 top officials of major anti-corruption related agencies, who include Prosecutor-General Yoon Seok-youl.

Shortly after taking office 2 1/2 years ago, Moon launched the Anti-Corruption Policy Consultative Council and presided over four rounds of sessions.

On Friday, Moon had the meeting of an expanded council renamed to the Anti-Corruption Policy Consultative Council for Fair Society.

It represents "the clarification of the government's strong commitment and resolve to have the value of fairness take root throughout our society, not just addressing the corruption problem," Moon stressed. 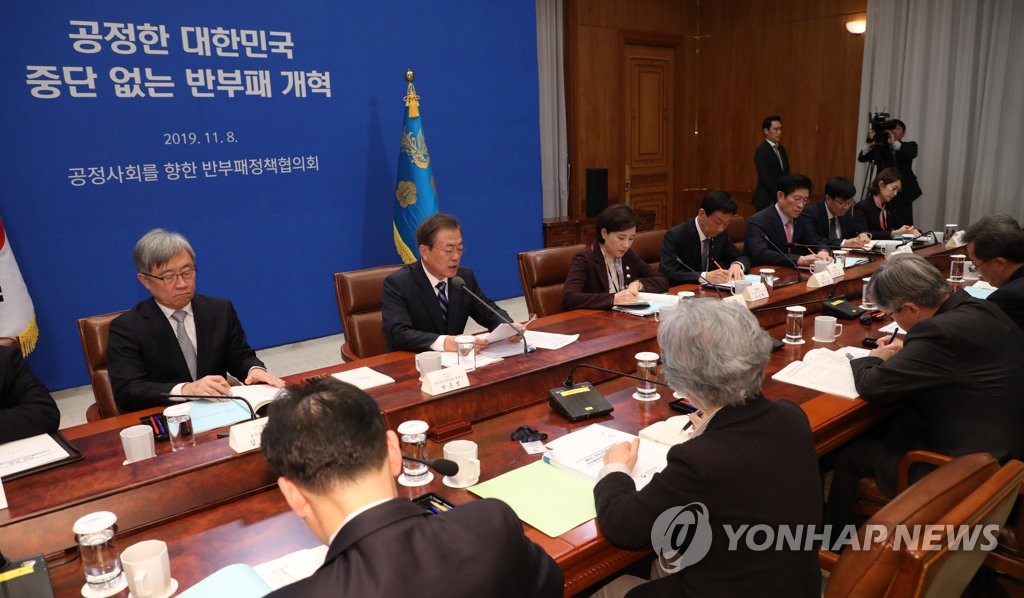 Moon said there has been some progress in the fight against corruption and other chronic malpractices in South Korea, but, "There's still a long way to go."

Even unfair perks and expedients granted within the framework of a "legitimate system" shouldn't be tolerated, he said.

To that end, he added, the government should map out "intensive measures to mobilize all effective measures."

He said it's very meaningful to touch on the issue of customary special treatment granted by prosecutors and judges to their retired colleagues practicing law as the first agenda item of Friday's council session.

It is a "deep-rooted unfair domain of our society," Moon, formerly a human rights lawyer, said.

He also emphasized the importance of the prosecutors office in the social meritocracy campaign against class privilege.

Moon said state prosecutors have secured a great deal of political neutrality and that they need to respond to the public call for "next-phase reform."

A pending task is to establish a fair anti-corruption system that won't be swayed under not only the incumbent, Yoon, but also his successors, Moon added.

He urged the prosecution to establish a system that ensures the protection of human rights and fairness in the investigation and indictment process.

Meanwhile, Moon ordered a fight against illegality and unfairness in the recruitment of workers and the private education market, including for-profit, after-school cram academies that specialize in mathematics, English or essay writing.

Halfway through his single five-year term, the president has declared all-out efforts to promote fairness and impartiality. A catalyst was fierce public criticism against his pick of Cho Kuk, a law professor and one of his key aides, as justice minister. Cho's family has been facing a state prosecutors' probe into alleged irregularities, in particular over his daughter's elite schooling.

Amid Moon's sliding popularity, his supporters took issue with what they regard as a "reckless" investigation into Cho's family by the prosecution and argued that reforming the powerful agency is more urgent. As massive street protests for and against Cho continued on weekends, he bowed out last month, 35 days after his inauguration. Investigators are expected to summon Cho for questioning before long.