The party leaders who attended the nearly three-hour meeting were Lee Hae-chan of the ruling Democratic Party (DP), Hwang Kyo-ahn of the conservative main opposition Liberty Korea Party (LKP), Sohn Hak-kyu of the center-right opposition Bareunmirae Party, Sim Sang-jung of the progressive Justice Party and Chung Dong-young of the minor center-left Party for Democracy and Peace.

At the end of the session, held at Moon's official residence inside the presidential compound, the participants had a "rather positive discussion" on the issue of restarting the standing council on state affairs among the ruling and opposition parties and the government, according to a Democratic Party official.

LKP leader Hwang showed a "positive response that (his party) will consider" it, the official added.

Moon held the inaugural council meeting with the floor leaders of the five parties in November last year and planned to have quarterly sessions. But no follow-up meeting has taken place amid ferocious political strife. 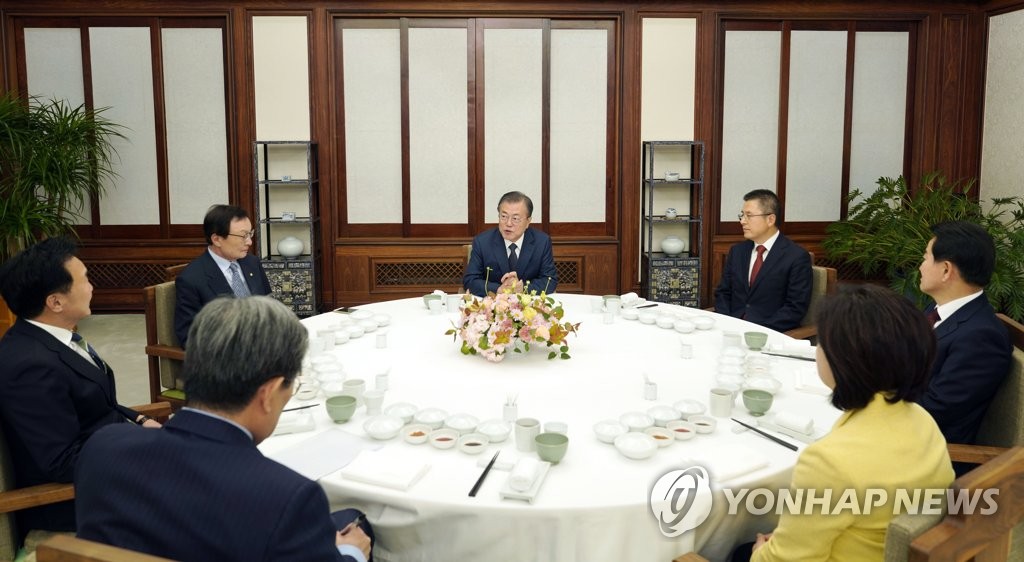 Sunday's group meeting, meanwhile, was their first gathering since July 18 when they convened to discuss ways to cope with Japan's export curbs against South Korea.

The meeting was closed-door apart from short clips and photos provided by Moon's office. Rice wine was served aside a pork dish to encourage pork consumption amid an outbreak of African swine fever cases. 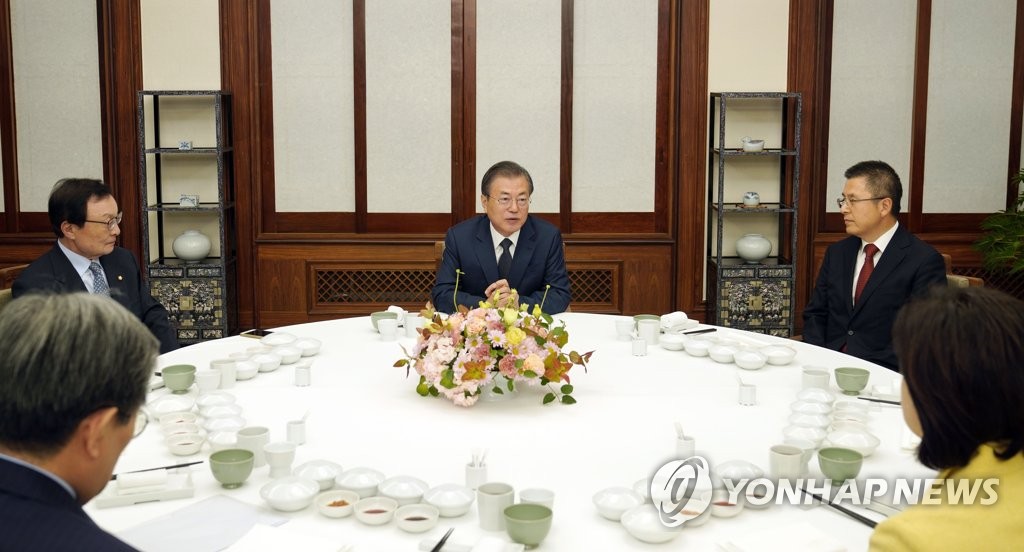 Contentious agendas were discussed during the meeting, according to participants.

Sim, the Justice Party leader, said the president stressed "the need for parties to cooperate in a bipartisan (manner)" regarding issues such as Tokyo's export curbs against Seoul and the General Security of Military Information Agreement (GSOMIA), the two countries' information-sharing accord that is set to expire this month.

The president also said "the Supreme Court's ruling on Japan's forced labor should be respected," Sim said, referring to the controversial ruling that ignited the economic and diplomatic rift between Korea and Japan.

Some participants, meanwhile, were said to have quarreled over the fast-tracked electoral reform bill that is at the center of a political rift, according to Chung and Justice Party spokesperson Kim Jong-dae.

While Moon voiced his hope that the National Assembly will resolve the issue, Hwang and Sohn briefly debated the issue before Moon intervened. The two later apologized.

Other contentious issues include the government proposal for a 513.5 trillion-won (US$444 billion) budget for next year and GSOMIA, which is set to expire Nov. 23.

Sunday's meeting was the first such gathering since former Justice Minister Cho Kuk, one of Moon's closest aides, stepped down following a series of massive street rallies for and against his appointment. Cho's family is being investigated over alleged irregularities, including his wife's questionable investment in a private equity fund.