SEOUL, Nov. 10 (Yonhap) -- Cheong Wa Dae said Sunday it would patiently advance the Korea peace process, although Seoul's own drive is restricted due to its international obligations and relations with Pyongyang.

Speaking at a press conference to mark the halfway point of President Moon Jae-in's single five-year tenure, his chief of staff, Noh Young-min, reaffirmed the prioritization of peace between the Koreas.

"The government will consistently advocate the path of Korean Peninsula peace with patience," he said.

Looking back on the previous two and a half years, Noh said it was a period of "grand transformation."

"The Moon Jae-in administration's last two and a half years was a process of overcoming the past and normalizing the state system and a time of establishing the foundation of a new Republic of Korea," he added, using South Korea's official name.

A sense of war crisis that was palpable before Moon's inauguration demonstrated which way South Korea should take, Noh pointed out.

He also said the government has sought an epoch-making change in the country's economic paradigm in the face of a rapidly changing world order.

"There's still a way to go" before the people feel the impact of various policies, he added. "The remaining two and a half years of the Moon Jae-in administration will be a time to leap toward a new Republic of Korea on the basis of the force of transformation." 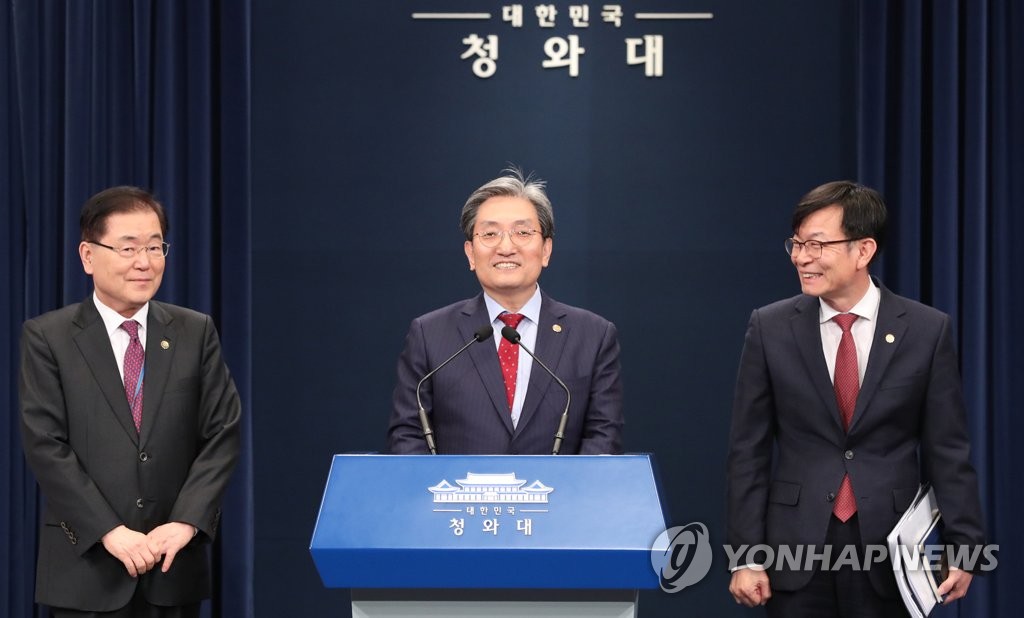 He cited an inter-Korean military accord, signed during Moon's trip to Pyongyang last year.

It has "systemically" prevented accidental clashes along the border of the two Koreas, serving as a "new chance" for a Cold War mechanism to be dismantled in Korea and a peace regime to start taking shape, Chung said.

The peace process is still confronted with hurdles, but the Moon administration's firm stance is that the security conditions here should not return to those before 2017, he said.

The government will explore "realistic ways" to promote "substantive cooperation" between the two Koreas, while continuing to bolster the combined defense posture based on the alliance with the United States, Chung added.