The North has emphasized that the administration of U.S. President Donald Trump should change tack and put forward fresh offers based on a "new calculation method" by the end of this year or face an end to the already troubled dialogue process itself.

Regarding the North's own deadline, "The South Korean government is also keeping an eye on (relevant situations) quite seriously," Chung Eui-yong, head of the presidential security office, told reporters.

He was holding a press conference with Cheong Wa Dae Chief of Staff Noh Young-min and Kim Sang-jo, who's in charge of policy at the office of President Moon Jae-in. The trio had the unusual joint press availability to commemorate the start of the latter half of Moon's single five-year presidency. 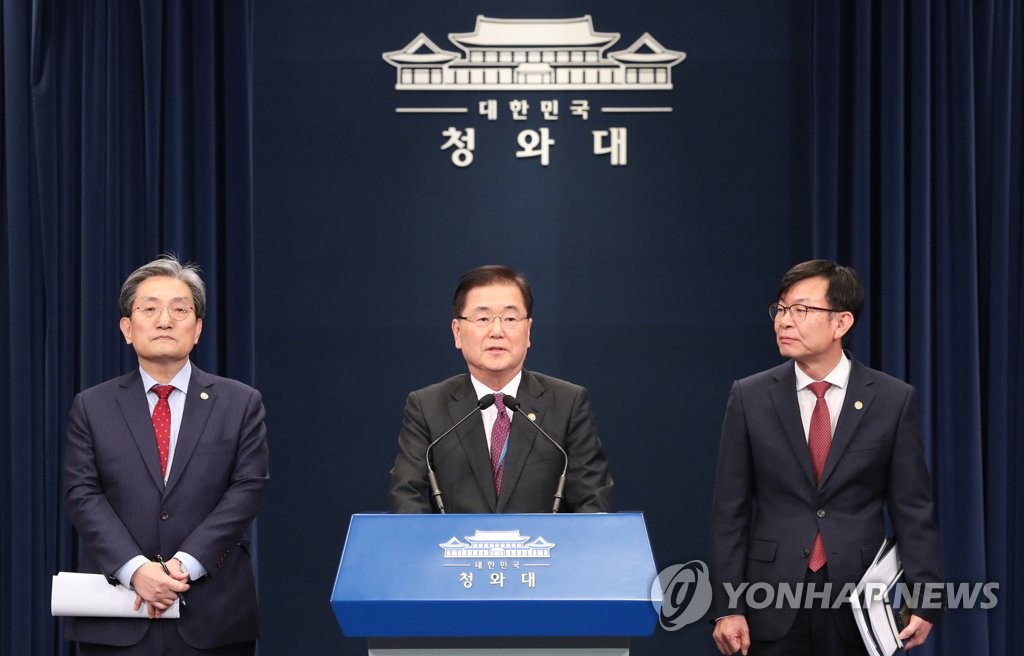 Chung said it's hard to predict when Washington and Pyongyang will resume negotiations but added that, "To my understanding, the U.S. side is persuading North Korea very aggressively."

South Korea is also coordinating closely with the U.S. so that denuclearization talks can proceed smoothly, getting "various contingency plans" ready for use, he said without elaborating.

The South Korean government's position is that security conditions on the peninsula should never return to the level before 2017.

"We are making various efforts for that" under the principle that an improvement in inter-Korean relations is vital, he stressed.

Even ahead of Pyongyang's recent call for the removal of South Korean equipment and facilities at its Mount Kumgang resort zone along the East Coast, South Korea believed that a re-development project was needed to prepare for the resumption of a joint tour program there someday, according to Chung.

The South hopes to have consultations with the North on the matter and continue efforts to protect the property rights of local firms that have invested in the now-suspended tourism project, he said.

He cited an inter-Korean military accord, signed during Moon's trip to Pyongyang last year.

It has "systemically" prevented accidental clashes along the border of the two Koreas, serving as a "new chance" for a Cold War mechanism to be dismantled in Korea and a peace regime to start taking shape, Chung said.

The peace process is still confronted with hurdles but it's important to keep it alive, he said, recalling the three principles Moon presented in his latest United Nations General Assembly speech: zero tolerance for war, mutual security guarantee and co-prosperity,

The government will explore "realistic ways" to promote "substantive cooperation" between the two Koreas, while continuing to bolster the combined defense posture based on the alliance with the United States, Chung added.

On the fate of a military information-sharing accord with Japan, Chung said his government can reconsider a decision to terminate it if bilateral relations are "normalized."

He was responding to a question about whether Cheong Wa Dae can exert some flexibility on the issue of the General Security of Military Information Agreement (GSOMIA).

On Aug. 22, the Moon administration announced that it wouldn't extend the agreement, signed in 2016. Tokyo earlier removed Seoul from the "whitelist" of trusted trade partners in apparent retaliation over issues related to their shared history.

GSOMIA is slated to expire next week, and U.S. officials have urged South Korea to retain the pact. Washington views it as pivotal to bolstering trilateral security cooperation in the region.

"If South Korea-Japan relations are normalized, our government has the intention of considering the extension of GSOMIA again," Chung said. Seoul has repeatedly delivered the position to Japan, he added.

Even if GSOMIA expires, "limited impact" is expected on South Korea's national security, Chung said. GSOMIA is a one-on-one issue between the neighboring countries, not directly associated with the Seoul-Washington alliance, he added.

He noted, however, that South Korea is well aware of the importance of Seoul-Tokyo relations as partners to cooperate for regional security and peace. 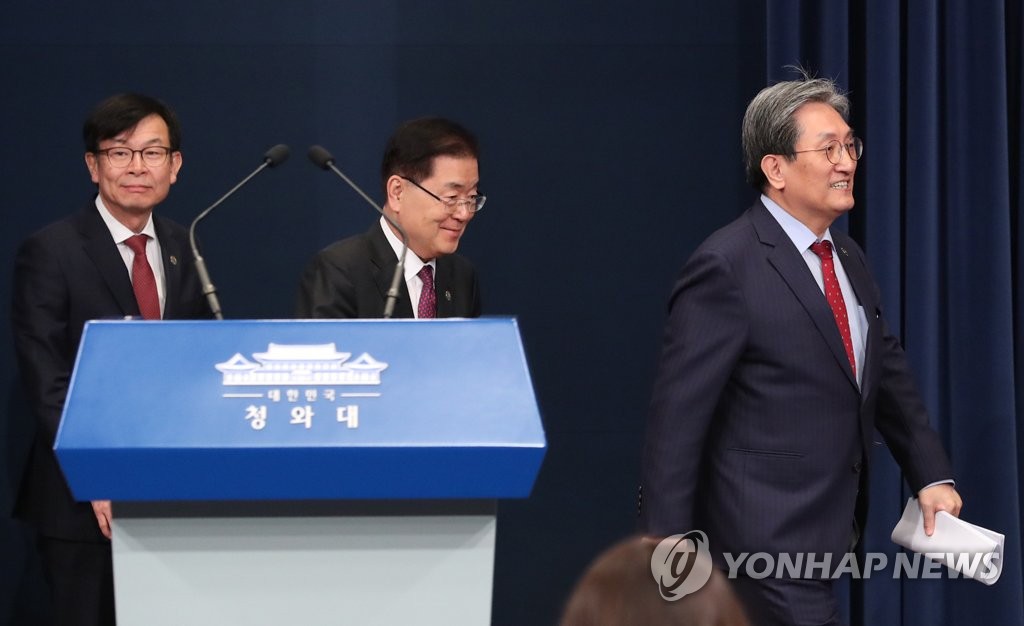 Meanwhile, the Cheong Wa Dae chief of staff described the first half of Moon's presidency as a period of "grand transformation."

"The Moon Jae-in administration's last two and a half years was a process of overcoming the past and normalizing the state system and a time of establishing the foundation of a new Republic of Korea," he added, using South Korea's official name.

He hinted at the possibility of a Cabinet reshuffle and a shake-up of Cheong Wa Dae aides to replace those who seek to run in the April 15 general elections.

"In case of figures who the (ruling Democratic) Party wants in connection with next year's general elections and they agree, I think we will have to let them go."

The Cheong Wa Dae policy chief said the government will be quick in taking necessary measures to curb hikes in housing prices in Seoul and some nearby towns.