Hong Nam-ki made the pledge citing recent improved growth forecasts by the International Monetary Fund (IMF) and the Organization for Economic Cooperation and Development (OECD).

The IMF and the OECD have projected that the South Korean economy could grow 2.2 percent and 2.3 percent, respectively, in 2020.

"I am neither excessively optimistic nor pessimistic on next year's economy," Hong said in a news conference at the finance ministry in Sejong City, an administrative hub 130 kilometers southeast of Seoul.

Hong said the government plans to release its 2020 growth outlook in mid-December. 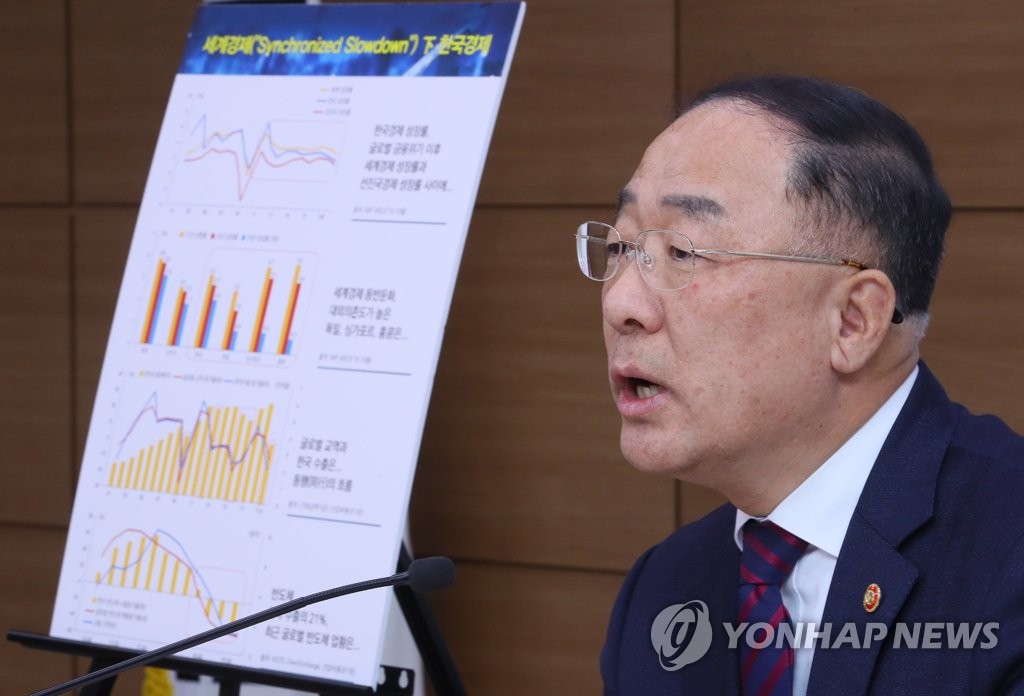 In July, South Korea slashed its economic growth outlook for this year to between 2.4 percent and 2.5 percent from its previous forecast of between 2.6 percent and 2.7 percent, made in December, citing weak exports and sluggish investment.

However, Hong said last month that South Korea's economic growth could be lowered to between 2 and 2.1 percent.

Hong said the government will come up with a set of economy-boosting measures and expedite efforts to secure engines of growth from a mid- to long-term perspective.

Semiconductors, which account for one-fifth of South Korea's exports, are in a stage of cycle correction amid a slowing global economy.

South Korea -- home to Samsung Electronics Co., the world's largest memory chipmaker, and its smaller rival SK hynix Inc. -- accounted for more than 60 percent of the global memory market in 2018.

Hong also said a hike in next year's fiscal spending will play an essential role in supporting innovative growth and vulnerable people amid a slowdown in private-sector investment in South Korea.

The expansionary budget -- which needs parliamentary approval -- represents a 9.3 percent hike from 2019 and marks the second straight year that the budget proposal has risen by more than 9 percent.

South Korea's national debt is projected to stand at 39.8 percent of its gross domestic product in 2020 before rising to 46.4 percent in 2023, but Hong said the debt level is something the country can manage.