A plane, believed to be an E-8C nicknamed JSTARS, was spotted in skies above the peninsula, Aircraft Spots said on its Twitter account without specifying the exact time of the operation. It also did not upload a related photo showing its flight route.

As a platform for airborne command and control, surveillance and reconnaissance, the E-8C is known to be capable of closely monitoring North Korea's troops and equipment movements, including missiles and artillery guns.

The E-8C last flew over South Korea on Thursday and the RC-135U on Oct. 29, according to Aircraft Spots.

The U.S. has deployed several other surveillance planes over the peninsula in recent days, as Pyongyang has ratcheted up tensions through military movements.

The RC-135W Ribet Joint was spotted over the peninsula on Monday and the U-2S plane over the weekend. The EP-3E and RC-135V reconnaissance jets were also detected over South Korea last week, the aviation tracker said.

On Thursday last week, the North test-fired a super-large multiple rocket launcher as the 13th round of major weapons tests so far this year. On Nov. 23, the North carried out coastal artillery firing drills under the guidance of its leader Kim Jong-un on the Yellow Sea border islet of Changrin.

Such acts came ahead of the year-end deadline that Pyongyang set for Washington to show flexibility in nuclear negotiations, which have made little progress since the breakdown of their summit in Hanoi in February.

"South Korea and the U.S. have been closely monitoring North Korea's military moves, as it can test-fire missiles at any time with its transporter erector launcher (TEL) vehicles," a military source said, adding that the North has shown "a normal level" of moves at its missile bases across the country.

Other sources noted that the U.S. could have let its aircraft be spotted "intentionally to send a message of pressure to North Korea."

According to Japan's Asahi Simbun on Monday, North Korea has been building dozens of concrete platforms for mobile missile launchers, which "got under way this summer at dozens of sites."

"Construction of the platforms apparently reflects fears that launchers could become dysfunctional or missile trajectories veer off track due to the soft ground on which they are installed," the report said, citing defense sources in the U.S. and South Korea. 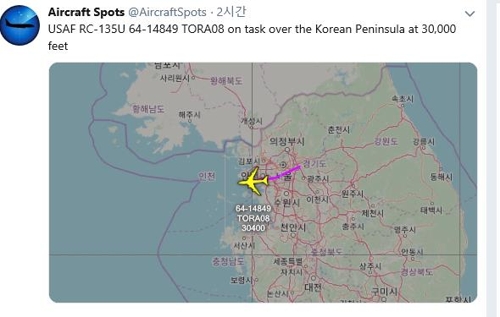