SEOUL, Dec. 4 (Yonhap) -- Seoul Mayor Park Won-soon on Wednesday reiterated hope that the two Koreas can co-host the 2032 Summer Olympics, asserting that the hosting, if materialized, will serve as a driving force for peace in Northeast Asia.

"The most important task in establishing reconciliation and integration in Northeast Asia is (for South and North Korea) to realize a 'peace community,' and the Seoul-Pyongyang co-hosting of the 2032 Olympics will provide a precious opportunity to accomplish the goal," Park said at the inaugural Seoul Peace Conference at a Seoul hotel.

Park's remarks are in line with the central government's ongoing efforts for the co-hosting, for which South Korean President Moon Jae-in and North Korean leader Kim Jong-un agreed to push at their third summit in Pyongyang in September last year.

It remains unclear, however, whether the co-hosting will materialize amid frozen relations between the two Koreas. 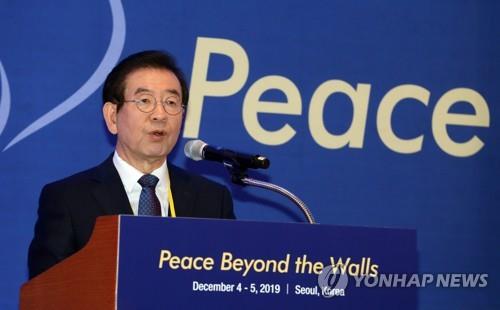