The statement, signed by 43 civic groups in 12 countries, including Japan, the United States, Canada and Germany, was unveiled during a weekly protest rally against Japan's wartime sex slavery, according to the rally's organizer, Korean Council for Justice and Remembrance for the Issues of Military Sexual Slavery by Japan.

National Assembly Speaker Moon Hee-sang last month proposed a bill to create a fund to compensate victims of Japan's wartime forced labor with contributions by firms, governments and citizens of both nations. The bill calls for building a 300 billion-won (US$255 million) fund to compensate some 1,500 victims of Japan's forced labor, a major diplomatic thorn between the two countries. But forced labor victims have negatively reacted, saying Moon's proposal is tantamount to exempting the Japanese government and companies from responsibility. 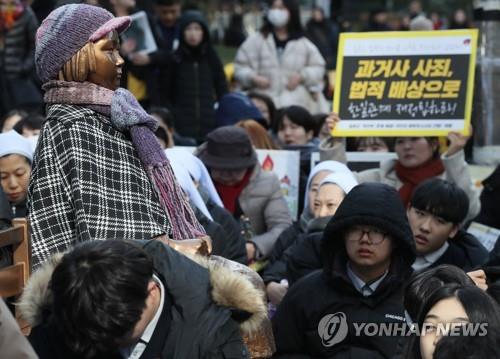 The joint statement by the global civic groups also stressed the Japanese government's acceptance and fulfillment of responsibility for wartime crimes in order to restore the honor of Korean victims.

"Moon Hee-sang's proposal is only intended to pay compensation to (victims of) anti-humanitarian wartime crimes, such as forced labor mobilization and sexual slavery, only from the political and diplomatic standpoints," the statement said.

It noted Moon's proposal includes content that endorses the 2015 agreement with Japan over South Korean sexual slavery victims, which was already attacked by the Moon Jae-in government as unprincipled.

It also said the United Nations has clearly declared that the settlement of anti-humanitarian crimes, like sexual slavery by Japan, can only be achieved by perpetrators' acknowledgement of crimes, official apology, compensation and promise not to repeat such crimes.

"What the Korean government and parliament have to do is to urge the Japanese government to admit its (wartime) crimes and fulfill responsibilities in order to restore the human rights and honor of victims," the statement said, calling for an immediate abolition of the Moon proposal.