SEOUL, Dec. 15 (Yonhap) -- A possible bilateral meeting between the top diplomats of South Korea and Japan on the sidelines of the multilateral gathering in Spain this week is unlikely to take place due to the failure to arrange their schedule, officials said Sunday.

The two countries have been working to set up a one-on-one meeting between Foreign Minister Kang Kyung-wha and her Japanese counterpart, Toshimitsu Motegi, on the margins of the 14th Asia-Europe Meeting (ASEM) foreign ministerial meeting set to be held in the Spanish capital of Madrid on Sunday through Monday (local time).

But the two sides "have yet to coordinate the schedule despite their willingness to have such a meeting," a Seoul government official said.

Kang is set to arrive in the European country late Sunday, but Motegi reportedly is planning to leave Madrid in the early afternoon of Monday.

Instead, Seoul and Tokyo have been reviewing an option to have brief talks during the ASEM meeting early Monday, according to the officials.

If held, the meeting is expected to serve as another chance for the two countries to explore ways to resolve their conflicts over wartime history and trade issues.

The two ministers last met in Nagoya on the sidelines of a foreign ministerial meeting of the Group of 20 nations on Nov. 23, one day after Seoul announced its decision to conditionally suspend the expiry of a bilateral military information-sharing pact with Tokyo known as the General Security of Military Information Agreement (GSOMIA). 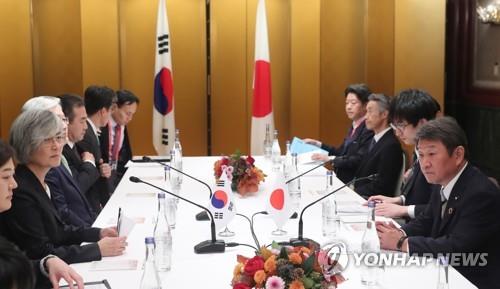