SEOUL, Jan. 26 (Yonhap) -- South Korea on Sunday reported its third confirmed case of the Wuhan coronavirus amid mounting fears over the spread of the pneumonia-like illness throughout China and other parts of the world, with quarantine authorities scrambling to determine how best to respond to people who initially show no symptoms.

According to the Korea Centers for Disease Control and Prevention (KCDC), a 54-year-old South Korean resident of Wuhan who arrived back home on Monday tested positive for the new strain of the virus that has killed 56 people so far.

"Upon arrival at the airport he showed no symptoms and was not aware he had been infected until he started suffering from fever, chills and muscle cramps on Wednesday. His condition seems to have improved for a few days before getting worse again, at which time he contacted health authorities and was placed in isolation on Saturday for tests and treatment," the KCDC said. 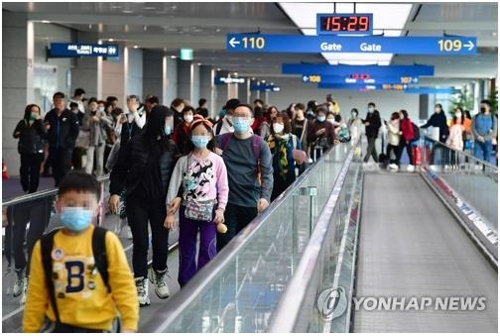 It said more information about the third case will be made available in due course with all efforts being made to trace his whereabouts and people he met after arriving in the country.

The country reported two confirmed cases of the new coronavirus strain on Monday and Friday and is keeping close tabs on those that may have come in contact with such people. In the first incident, the KCDC discovered 44 people who came into contact with the 35-year-old Chinese woman, while in the second case, involving the 55-year-old South Korean man, a total of 67 people have been identified and are being monitored.

Health authorities said that of the two people who were earlier confirmed to have been infected, both are in a stable condition and are receiving treatment.

Besides the latest confirmed case, the KCDC said it has checked 47 people who have shown symptoms so far, with all testing negative for the illness. The tally of people screened was 32 on Saturday.

To counter the health threat posed by the virus, authorities here said Saturday that they have designated mainland China a "coronavirus watch" zone as part of their ongoing efforts to prevent the spread of the Wuhan coronavirus here.

"The government will start asking all travelers coming in from China to fill out detailed health questionnaires upon arrival in the country," a KCDC source said. The tighter rules will not be enforced immediately as related personnel need to be trained, she said.

South Korea's foreign ministry raised the travel advisory level for Wuhan and the Hubei region to "red alert" and recommended its citizens evacuate the region.

"Red alert" is the third highest in the country's four-tier travel warning system.

The South Korean government is also considering evacuating its citizens from Wuhan on a chartered plane. About 500 South Koreans are said to be staying in and around Wuhan.

According to South Korean residents in Wuhan, the South Korean Consulate General in the city recently polled them about chartering a plane out of Wuhan. More than 400 people said they would board the flight if one became available.

The Wall Street Journal reported on Saturday the U.S. government will offer 1,000 American citizens in Wuhan a seat on a chartered 230-seat Boeing plane. The South Korean government has yet to reach an agreement with its Chinese counterpart over the use of its own chartered flight.

Reflecting the concerns raised by the coronavirus, airports across South Korea have set up checkpoints to screen passengers from China and other countries for signs of illness, with local authorities accelerating quarantine efforts to contain the virus as people visit relatives at home or travel abroad.

Health workers stressed citizens should follow strict personal hygiene rules whether they are in the country or traveling abroad, especially since large numbers of Chinese tourists are visiting South Korea during the holiday period. The start of the Lunar New Year is celebrated by both Korean and Chinese people.

Health authorities also asked people to wash their hands frequently, cover their mouths when coughing and, if they have respiratory problems, wear a mask.

Common symptoms of the coronavirus, thought to have originated in Wuhan, central China, include fever, sore throat and breathing difficulties, with more acute cases bringing chills and muscle pain. Health experts said that elderly people and those with underlying disorders should be more careful.

Local businesses, meanwhile, said that with the spread of the coronavirus, many have halted all trips by employees to Wuhan and the nearby area.

SK Global Chemical Co. and steelmaker POSCO said they have stopped all trips to the most-affected areas, while oil refiner SK Innovation Co. announced that only critical personnel will be permitted to visit.

Elsewhere, the province of South Chungcheong said it has canceled visits by 3,000 Chinese tourists from Jan. 30 to the end of February. To promote regional tourism, South Chungcheong had worked with travel agencies and tour promotion bodies to attract Chinese travelers. Though the tourists whose trips have been canceled are from areas far outside Wuhan, the province noted that the coronavirus has already spread across China and it does not want to take the risk of having the illness find its way to South Chungcheong.

China announced that besides the deaths, 1,975 people are confirmed infected amid concerns that the virus is spreading quickly and widely. It said that of those infected, 324 were in critical condition.

Outside China, Japan, Taiwan, Thailand, Vietnam, Singapore, Malaysia, Macao, Hong Kong, France, Australia and the United States have reported confirmed cases of the new coronavirus strain, and there are media reports of a new case in Canada. 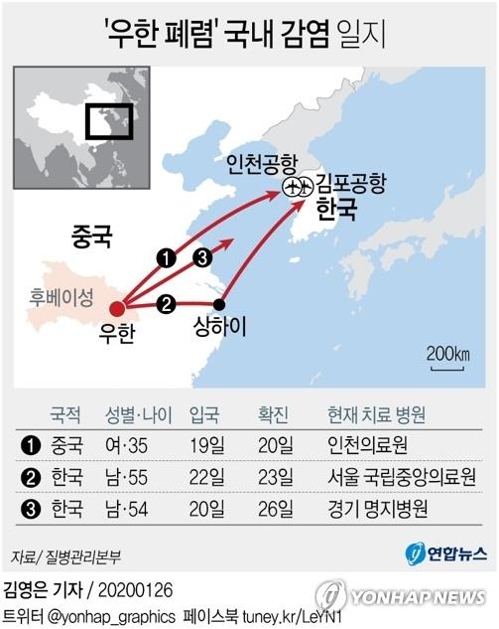