SEOUL, Feb. 12 (Yonhap) -- Samsung Electronics Co. will join hands with Netflix Inc., the world's leading streaming entertainment service provider, on mobile entertainment as the South Korean tech giant looks to expand partnerships with global media and IT service giants upon the introduction of its new smartphones.

"The mission of this partnership (is) to make the Netflix viewing experience on Samsung mobile the absolute best it can be," Netflix Chief Marketing Officer Jackie Lee-Joe said at the event. "This means that even more users can enjoy our best-in-class stories across all genres through even better product integration with Galaxy mobile devices." 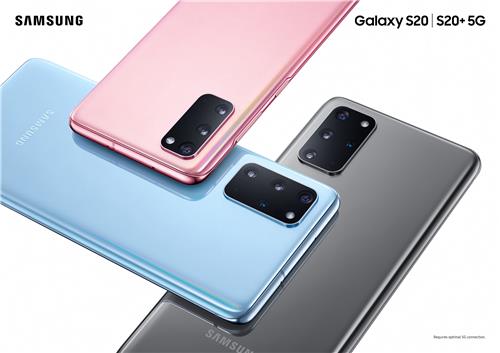 In the coming months, Samsung device owners will be able to get exclusive bonus content based on popular Netflix Originals, such as behind-the-scenes content from crime drama series "Narcos: Mexico." Samsung said it will provide its latest Galaxy S20 smartphones to renowned directors working with Netflix to capture bonus content.

"Users can also discover Netflix's best-in-class content through an improved integration with Galaxy devices, enabling ease of content discovery and accessibility via Samsung Daily, Bixby, and Finder," Samsung said in a statement.

In addition to Netflix, Samsung also announced it has joined forces with Google to provide better video chatting services. Samsung said Google Duo will be the default video chat app built into the dialer.

"Together, we're using 5G to change the way we communicate," said David Park, head of U.S. mobile channel marketing at Samsung. "We worked with Google to integrate their software with our hardware, bringing new Duo features to Galaxy smartphones starting with the Galaxy S20 and Z Flip."

Samsung said it has also joined hands with Google's online video platform, YouTube, in a move to better help its users upload their 8K videos recorded from smartphones directly to YouTube.

For mobile game lovers, Samsung said it has also teamed up with Microsoft Corp. to launch the latter's popular "Forza Street" racing video game to be available in mobile, emphasizing that its Galaxy S20 series has a 120HZ refresh rate to provide smoother animations.