Samsung will first work with BTS for the boy band's global contemporary art initiative, "CONNECT, BTS," and will expand their collaboration to other areas, according to the officials.

"CONNECT, BTS" is a global initiative spearheaded in collaboration with curators from five major cities -- London, Berlin, Buenos Aires, Seoul and New York -- to connect people from across the world through art.

The art project was designed to dovetail with BTS' philosophy that centers around diversity, love and care for the periphery. 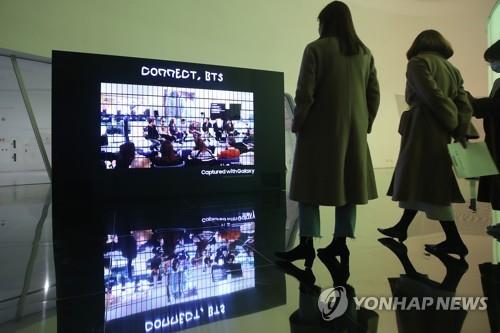 Samsung said it will support augmented reality (AR) docent service for the project, in which members of BTS appear and explain art pieces in a virtual system.

The South Korean tech giant also installed a media facade with its Galaxy devices for the art project in Seoul and New York.

Samsung didn't elaborate on its partnership with BTS, but industry insiders expect that the septet will participate in the company's various promotion and marketing events regarding its new smartphones launched earlier this month.

At Samsung's "Galaxy Unpacked 2020" in San Francisco, where the company unveiled the Galaxy S20 series and the Galaxy Z Flip smartphones -- BTS member V was spotted at the event.

"We hope we can deliver a good experience to fans of BTS and Galaxy devices around the globe through collaboration with BTS," a Samsung official said. "We are planning various activities other than 'CONNECT BTS.'"