(ATTN: UPDATES with new figures and more details in first 4 paras and in paras 21-25, minor edits throughout)

SEOUL, March 16 (Yonhap) -- Another cluster transmission of the new coronavirus has infected 46 members of a protestant church in Seongnam, just south of Seoul, the municipal government said Monday, ringing an alarm bell on the steady spread of cluster infections in the capital area.

The city government of Seongnam, Gyeonggi Province, said 40 additional followers of the River of Grace Community Church tested positive for COVID-19 after six members, including the pastor and his wife, were found to be infected over the past week.

They all attended the same service on March 8, it noted.

One Seongnam resident who had come into contact with one of the infected church members also tested positive for the virus. 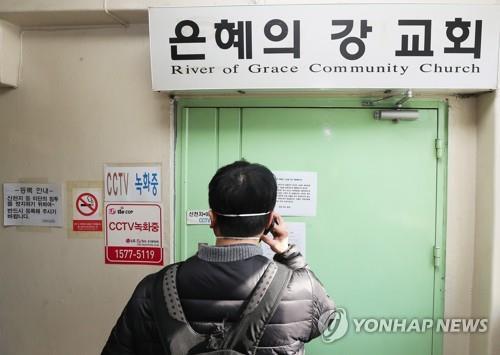 The Seongnam church became the second-largest cluster of infections in the capital area after a Seoul insurance call center, which has so far reported 129 infections.

According to Seongnam officials, the coronavirus infections of the church's pastor, wife and other members who attended the same service on March 8 have been confirmed over the past week.

The city government made the announcement after testing all of the church's 135 followers, including about 90 who attended the March 8 service.

The Seongnam church case came after several cluster infections have been recently reported across the Seoul metropolitan area amid a steep decline in the number of new COVID-19 cases in South Korea, in addition to outbreaks in Daegu and North Gyeongsang Province, the center of the nation's coronavirus outbreak.

South Korea on Monday reported 74 new cases of the coronavirus to total 8,236, marking the second consecutive day the number of new cases was below 100.

Authorities, however, are still on high alert over new clusters of infections, including at a call center in Seoul's Guro district and the country's government complex in the administrative city of Sejong.

A total of 129 cases in Seoul, Incheon and Gyeonggi Province have been linked to the Guro call center, while the oceans ministry, based in the central city of Sejong, around 130 kilometers south of Seoul, has reported 27 confirmed cases.

According to Seoul's metropolitan government, a cluster infection originating at a church and an internet cafe in Dongdaemun Ward has also affected 24 people.

Seoul has so far reported a little over 250 confirmed cases, while Gyeonggi Province's coronavirus patients have topped 230.

The authorities have urged local churches and other religious organizations to refrain from holding worship in person, but some have failed to heed the request.

Lee Jae-myung, governor of Gyeonggi Province, met with the province's religious leaders on Feb. 28 to encourage them to hold online services to help curb the coronavirus outbreak.

Seongnam's River of Grace Community Church, however, went ahead with its Sunday services on March 1 and 8.

The church, located on the third and fourth floors of a commercial building, has announced a two-week shutdown from last Monday to this coming Sunday.

Most of the building's stores, including a restaurant, cafe and hospital, have also temporarily suspended business after the mass infection of the church followers was reported.

Neighbors say around 100 followers used to pack the church's chapel of about 100 square meters on the third floor every Sunday, adding the place was also frequented by 20 to 30 followers on weekdays.

"All large-scale churches in Seongnam have suspended physical worship services, but the River of Grace Community Church had pushed ahead with its Sunday gathering for two weeks, despite protests from neighbors," a Seongnam resident said. 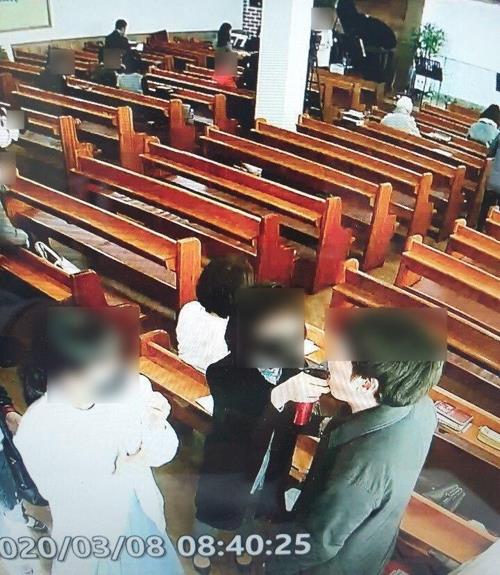 Provincial officials suspect that the church's inappropriate use of a salt water spray for all church members attending the Sunday services may have caused the latest cluster of infections.

Footage of a surveillance camera, released by the province, showed church officials spraying salt water into the mouths of all church members before attending the March 1 and 8 services, apparently for disinfection purposes.

"If the spray was repeatedly used for different people without disinfection, it could have increased the number of infections," a provincial official said.

The church's pastor, identified only as Kim, apologized for the mass infection of his church members, speaking over the phone with Yonhap News Agency.

"I feel deeply sorry about what has happened. I will take all the blame and responsibility," Kim said, indicating his intention to retire after the ongoing crisis is over.

Meanwhile, Seoul Mayor Park Won-soon told reporters Monday that most religious organizations have temporarily shifted to online services in accordance with the government's request, but 33 percent of churches in the city are still carrying on with offline worship.