SEOUL, May 15 (Yonhap) -- Tens of thousands of fans from across the globe simultaneously cheered and applauded in the safety of their own homes when their favorite K-pop boy band, SuperM, appeared on the screen for an online concert.

Streamed live on the internet portal Naver's V Live service on April 26, the two-hour concert brought back together the Billboard-topping K-pop band and its fans from across the world without the hassles of cross-border trips or crowds in the time of a pandemic.

The first-ever exclusively online pop concert, with a fee, according to the group's management agency, drew about 75,000 fans.

A mosaic of hundreds of thousands of moving images showing the individual faces of the latest SuperM concert's spectators flickered in the backdrop of the live show as Alison, one of the fans, posed a question about pastime to Taemin, a member of the boy band. 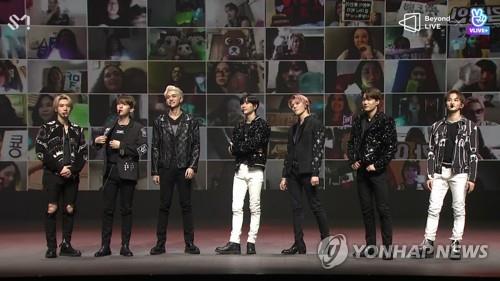 Taemin immediately answered, telling the waiting fans that he watches movies or YouTube while staying at home. Fans instantly erupted in cheers.

As the band performed 18 songs during the two-hour event, moving 3D images of animals and stage settings appeared on the screen, enhancing the show's excitement while an accompanying chat room allowed fans to share comments among themselves and with the stars.

The simultaneous screams of roaring fans were also intermittently inserted to the show's background while the fans' light sticks were connected to the show's control center to change colors in sync with the show's progress. 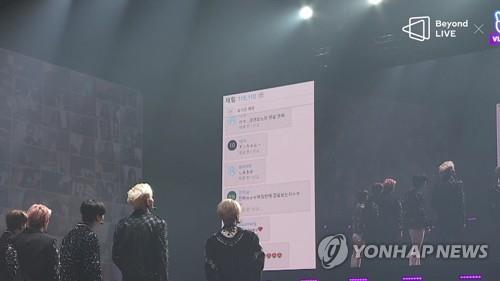 SM Entertainment, the band's management agency, said the show, with the ticket price of 33,000 won (US$27) and technically supported by Naver, was watched by about 75,000 fans from 109 countries as the first edition of the Beyond Live concert series.

SM's other high-profile artists, including NCT 127, TVXQ and Super Junior, are also on course to meet with fans through the concert system this month.

Going forward, SM said the concert series will adopt a "multicam" function, starting this month, allowing fans to select their favorite band members and to enjoy zoomed-in images of a particular artist.

"Beyond Live is the first-ever paid concert conducted exclusively online in the world that SM launched in cooperation with Naver," SM said. "Equipping K-pop performances with AR and 3D graphic technologies, it provides entertainment that is only possible online," it said.

Including SM's new business venture, the K-pop scene is striving to convert its lucrative performance business online as the industry is looking for a new source of revenue as the pandemic axed its massive global concert revenues.

Having postponed the entire itinerary of its world tour this year, K-pop superband BTS is also gearing up to join the ticketed livestreaming concert front.

BTS' agency, Big Hit Entertainment announced a day earlier that the septet will stage an online live concert, Bang Bang Con the Live, on June 14 (Korean time), inviting fans from around the world.

The paid concert comes after BTS aired free online streams of its previous live shows last month in a pilot online concert project. A total of 2.24 million fans simultaneously connected to the two-day livestreaming event in April, proving the potential of online live shows in the time of social distancing. 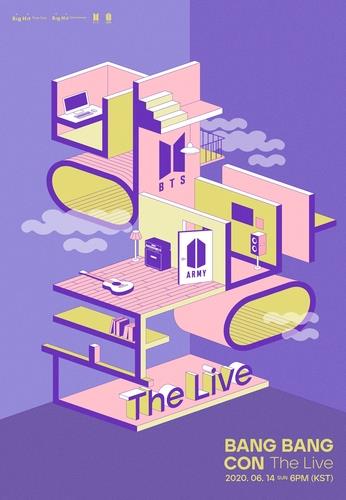 Joining the trend, South Korean entertainment giant CJ ENM has announced that this year's KCON, a major annual K-pop and Korean culture festival, will be held partly as an YouTube streaming event from June 20-26, featuring some 30 K-pop artists.

Some of the festival's content, which spans from music concerts, fan-meeting events and beauty and food promotion programs, will be available as paid services, CJ said, adding that parts of the proceeds will be donated to UNESCO.