SEOUL, May 19 (Yonhap) -- South Korean stocks jumped by more than 2 percent on Tuesday, joining other Asian and global stock markets in a rally that came on hopes of a vaccine for COVID-19. The local currency sharply rose against the U.S. dollar.

The benchmark Korea Composite Stock Price Index (KOSPI) spiked 43.50 points, or 2.25 percent, to close at 1,980.61, extending its winning streak to a third day.

The Tuesday closing marks the highest since March 6 when the comparable figure was 2,040.22 points.

Trading volume was moderate at some 762 million shares worth about 11.7 trillion won (US$9.55 billion), with gainers outnumbering loser 654 to 203. 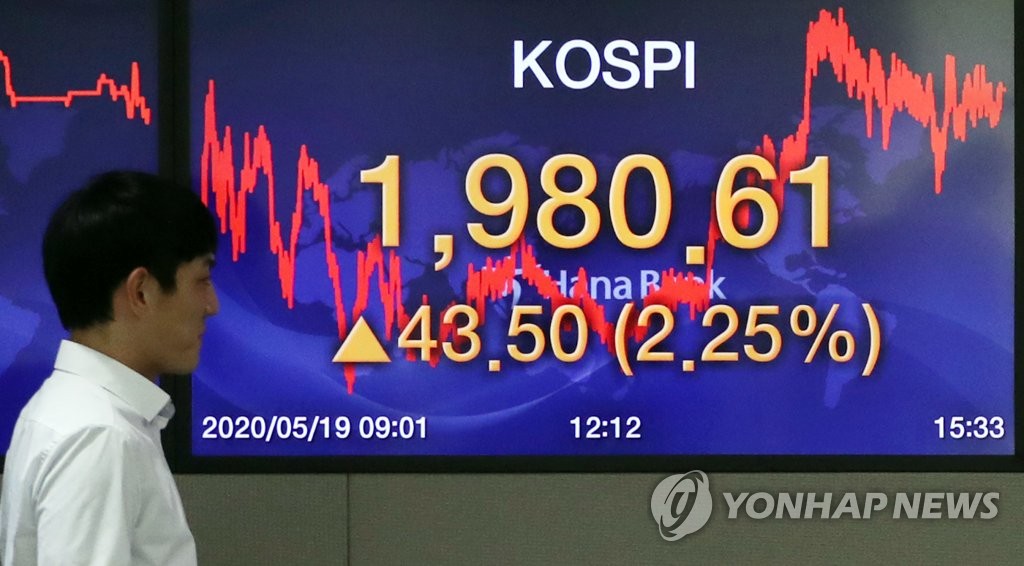 The index got off to a firm start after reports of positive results from a COVID-19 vaccine test sparked stock market rallies in the U.S. and other major economies.

"It was the Fed that had led the stock market rally before Moderna announced the result of its clinical test. Chairman Powell said the Fed has not run out of ammunition and that it may take additional steps," Noh said.

Bond prices, which move inversely to yields, closed mixed. The yield on three-year Treasurys shed 1.1 basis points to 0.876 percent, while the return on the benchmark five-year government bond added 0.4 basis point to 1.132 percent.