It will be the first time that the Seoul-based private museum will sell off part of its collection.

Kansong Art Museum was founded by Korean businessman Jeon Hyeong-pil (1906-1962) in 1938, initially with the name Bohwagak, during the Japanese occupation of the Korean Peninsula. 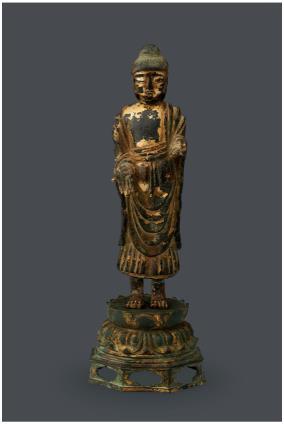 The founder of the first Korean private art museum devoted his fortune to collecting Korean cultural properties, saving them from colonial Japan's plundering. The museum reportedly owns about 5,000 items, including 12 national treasures and eight treasures.

Kansong's vast collection has been preserved by the founder's descendants, including his eldest son, Jeon Seong-woo, who died in 2018 and his grandson, Jeon In-geon, who is now the director of the museum. But the auction plan has come reportedly due to the museum's financial hardship.

K Auction said the auction for the two treasures will start at 1.5 billion won (US$1.22 million) each.

Gilt-bronze Standing Buddha, dating back to the middle of the 7th century during the period of the United Silla, was designated as South Korea's Treasure No. 284 in 1963. Standing in an imposing posture, its height reaches 38 centimeters, larger than any other gilt-bronze Buddhist statue manufactured during the Silla period.

Gilt-bronze Standing Bodhisattva made between the 6th and 7th century during the Silla Dynasty was also designated as the nation's Treasure No. 285 in 1963. The 19-cm-high statue was discovered in Geochang, southeast South Korea. 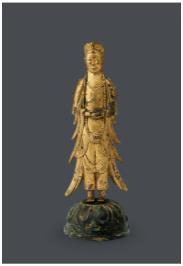