SEOUL, May 25 (Yonhap) -- Samsung Electronics Co.'s share of the global NAND flash market in the first quarter of the year dropped slightly compared to three months earlier, a report showed Monday, although it maintained dominance in the sector.

The South Korean tech giant, also the leader in the DRAM sector, had a 33.3 percent share of the global NAND flash market in terms of revenue in the January-March period, down 2.2 percentage points from a quarter earlier, according to market tracker DRAMeXchange, a research division of TrendForce. 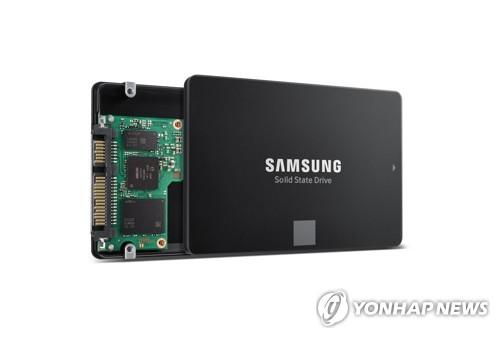 Samsung's revenue from NAND flash products came to a total of US$4.5 billion in the first three months of 2020, up 1.1 percent from a quarter earlier, according to the DRAMeXchange data, but other chipmakers posted larger sales increase over the cited period.

"During the onset of COVID-19, Samsung registered lower than expected client solid state drive (SSD) shipments because the outbreak kept ODMs from immediately resuming normal operations after the Lunar New Year holiday," DRAMeXchange said. "In addition, shipments of mobile memory/storage solutions also slowed down in the traditional off-season. However, these two factors were offset by the strong demand for enterprise SSDs from the cloud services sector."

"Although the mobile segment historically accounts for the majority share of SK hynix's NAND flash revenue, the rising demand from the cloud services sector led to a doubling of SK Hynix's enterprise SSD shipments in 1Q20," DRAMeXchange said. "SK hynix's NAND flash average selling price (ASP) went up by 7 percent quarter-on-quarter due to the optimization of its product mix."

The global NAND flash revenue for the first quarter was up 8.3 percent quarter-on-quarter to $13.6 billion, as demand for enterprise SSDs exceeded supply, according to DRAMeXchange.

For the current quarter, it expected NAND flash makers to further increase their revenues.

"The majority of NAND flash demand in 2Q20 will come from tablets, notebooks, and enterprise SSDs," DRAMeXchange said. "Driven by the strong demand for these applications, the corresponding shortage in the NAND flash market will in turn lead to rising NAND flash contract prices in 2Q20."