SEOUL, June 1 (Yonhap) -- The defense ministry stuck to its flat-out denial Monday of any upgrades to a U.S. THAAD missile defense base in South Korea after a series of reports suggested that last week's transport of military hardware into the base was aimed at upgrading or strengthening the unit.

On Friday, the U.S. Forces Korea brought new interceptor missiles as well as other military hardware and equipment for facility construction onto its Terminal High Altitude Area Defense (THAAD) system base in the central town of Seongju by ground, according to the ministry.

Officials here made it clear that the missiles were to replace expired ones and that no additional launchers were brought in. They also stressed that the transport has nothing to do with the U.S. project to upgrade the batteries. 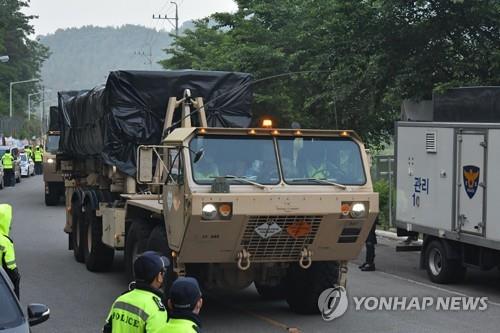 But some have raised questions about the ministry's explanation.

"The THAAD system itself is the latest one, and missile are designed to be stored inside tubes for more than 15 years," Shin Jong-woo, a senior analyst at the Korea Defense Security Forum in Seoul, said.

The full six-launcher THAAD battery was installed in South Korea in 2017. It is not known exactly when the missiles were produced, but experts say they appear to have been made about a decade ago at the longest.

According to the local daily Joongang Ilbo on Monday, the items that were brought onto the Seongju base last week include military equipment for the improvement of the THAAD system in a way to integrate it with Patriot missiles.

The defense ministry rejected the report as groundless.

"Joongang's report that says new equipment for such systems integration is not true. The replace was to change some of the decrepit equipment with the new ones of the same type, and has nothing to do with a THAAD system upgrade," deputy defense ministry spokesperson Col. Moon Hong-sik said.

In February, U.S. authorities said that they sought a US$1 billion budget for next year to upgrade its seven THAAD batteries, including one in Seongju, and related training equipment deployed around the world.

"If you take a AN/TPY-2 (THAAD radar), which can see a lot further than a Patriot battery radar, then now you can extend and take full advantage of the kinematic capability of a Patriot," U.S. missile agency director Vice Adm. Jon Hill said during a press briefing on Feb. 10.

He added that the mobilization of THAAD launchers through remote operation will lead to their integration with Patriot missiles, which will allow troops to use "the right missile for the right threat at the right time."

The current THAAD battery in Seongju is designed to work as a single unit. The integrated operation of THAAD and Patriot missiles would signify a substantial reinforcement of the U.S. missile defense system, according to experts.

But the Seoul government dismissed such suspicions, saying it would take a longer period of time and more steps before any systems upgrade of the THAAD system can be realized.

"We were earlier briefed by the U.S. on its upgrade plan. But it will not take place any sooner, as several problems were detected over the course of the U.S.' initial test and evaluation for the upgrade project," a ministry official said.

The upgrade plan is expected to spark strong opposition from China, which has long railed against the deployment of the new air defense system, saying it could be used to spy on the country and hurt its national security interests, as well as from local residents. 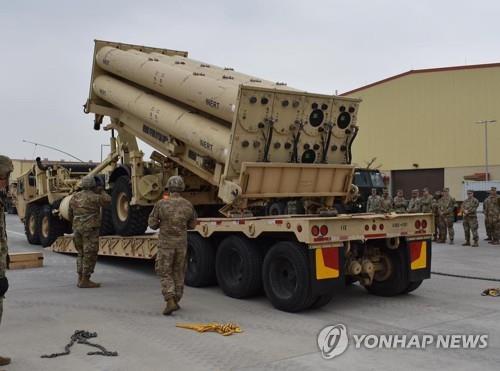 The ministry also rejected claims that the U.S. could have deployed additional launchers. Some have pointed out that one of the vehicles mobilized during Friday's transport was equipped with a dual erection cylinder and a rear stabilizer, both of which are used for the operation of the launchers.

"It is not for THAAD launchers, but the U.S. military's vehicle to transport guided missiles," the deputy spokesperson said.

Any additional measures regarding the THAAD system are subject to prior discussions between the two sides, he added.

The THAAD deployment has been one of the most sensitive diplomatic issues for South Korea, as China has taken economic retaliatory measures for Seoul's hosting of the battery upon Seoul's decision to host the U.S. air defense system in 2016.

Seoul and Washington have stressed that the system aims only to better cope with the growing missile threats posed by North Korea.

As an integral part of the U.S.-led missile-defense system, THAAD is designed to shoot down short-, medium- and intermediate-range ballistic missiles at a higher altitude in their terminal phase using a hit-to-kill method.