(ATTN: UPDATES with response from Medytox in paras 5-6 and share prices in bottom)
By Kim Han-joo

The three Meditoxin products -- which come in bottles of 50 units, 100 units and 150 units -- will be permanently removed from domestic shelves starting on June 25, according to the Ministry of Food and Drug Safety.

The ministry also ordered Medytox to recall the three products, urging local hospitals to participate in the action.

The agency, however, said that Meditoxin does not pose significant safety risks. 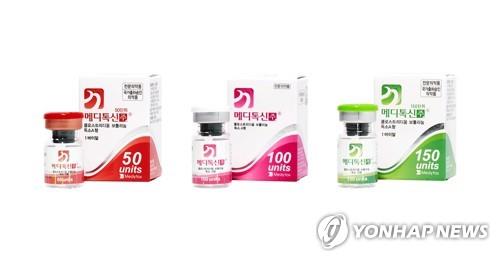 Medytox said it will seek an injunction and legal actions to nullify the decision.

The biotech company has repeatedly asserted that the products are safe and effective.

The Meditoxin lineup is responsible for about 40 percent of the company's annual sales. The products also take up about 35 percent of the local market, trailing behind industry leader Hugel Inc.'s Botulax.

The ministry said Medytox had used unauthorized ingredients and faked test results before submitting them to the agency to manufacture and sell Meditoxin in the local market.

The investigation showed that the pharmaceutical company repeatedly committed such illegal acts between 2012 and 2015, according to the agency.

The ministry already issued an administrative order on April 17 to temporarily suspend the manufacturing and sales of the three products.

The ruling comes as Medytoxin is in the midst of a legal battle with local drugmaker Daewoong Pharmaceutical Co. over the patents of a botulinum toxin strain.

The International Trade Commission is scheduled to deliver a preliminary ruling later this month, with the final verdict expected in October.

Shares in Medytox closed at 120,000 won (US$99.24) on the Seoul bourse, down 20 percent from a day earlier. The ruling was announced before the local market opened.