(ATTN: RECASTS headline, lead and throughout)
By Kang Yoon-seung

SEOUL, July 17 (Yonhap) -- South Korea said Friday it will build more wind farms off the southwestern coast of the country in line with its efforts to stay away from fossil fuel-powered energy generation and boost the virus-ravaged economy.

Under the plan, South Korea will complete the construction of offshore wind farms with a combined capacity of 2.4 gigawatts (GW) by 2028, according to the Ministry of Trade, Industry and Energy.

The total budget for the project in North Jeolla Province is estimated at 14 trillion won (US$11.6 billion) and will be raised from the private sector.

The ministry said it will first carry out studies by building offshore wind power facilities with a combined capacity of 400 megawatts (MW) before beginning full-fledged construction in 2023.

When completed, the wind farms will be able to supply power to some 2.24 million households. 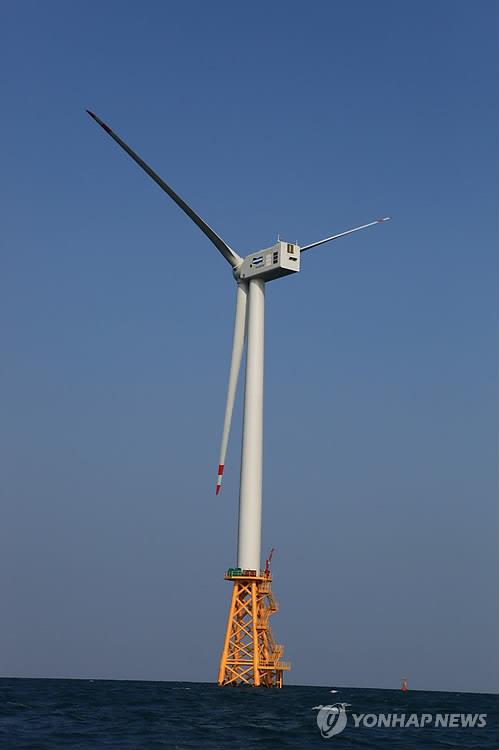 South Korea, which has been making efforts to reduce its consumption of traditional fossil fuels and instead use more sustainable resources, such as solar, wind and hydrogen, vowed to beef up its offshore wind power industry and expand capacity to 12 GW by 2030.

The goal is far above the country's current capacity estimated at around 124.5 MW.

The ministry said the latest project has paved the way for the country to reach the target by 2030, as there are also several projects pending in other areas, including in an island town in Sinan, about 400 kilometers southwest of Seoul.

Earlier this week, South Korea unveiled its Green New Deal, which centers on spending 73.4 trillion won to transform the nation's fossil fuel-reliant economy into an eco-friendly one.

The projects could create around 659,000 jobs and help the country overcome the COVID-19 crisis and prepare for the post-coronavirus era to be led by the fourth industrial revolution, according to the ministry.