Early this week, the country announced a set of ambitious stimulus measures amounting to 160 trillion won (US$132 billion).

Under the digital New Deal initiative, 58.2 trillion won will be spent by 2025 to update public infrastructure with digital services and increase state investment in key technologies, such as 5G and artificial intelligence.

Some 900,000 jobs will be created under the projects by 2025, according to the government.

As part of the initiative, telecom giant KT Corp. said it developed a safety monitoring system in Hanam, east of Seoul, that tracks the risks of old buildings collapsing in real time.

The system uses sensors on the telecom operator's optical fiber infrastructure to detect structural movement of 13 facilities in the city, according to KT.

Finance Minister Hong Nam-ki requested that KT expand the system nationwide during his visit to Hanam on Wednesday as the government prepares to implement its policy. 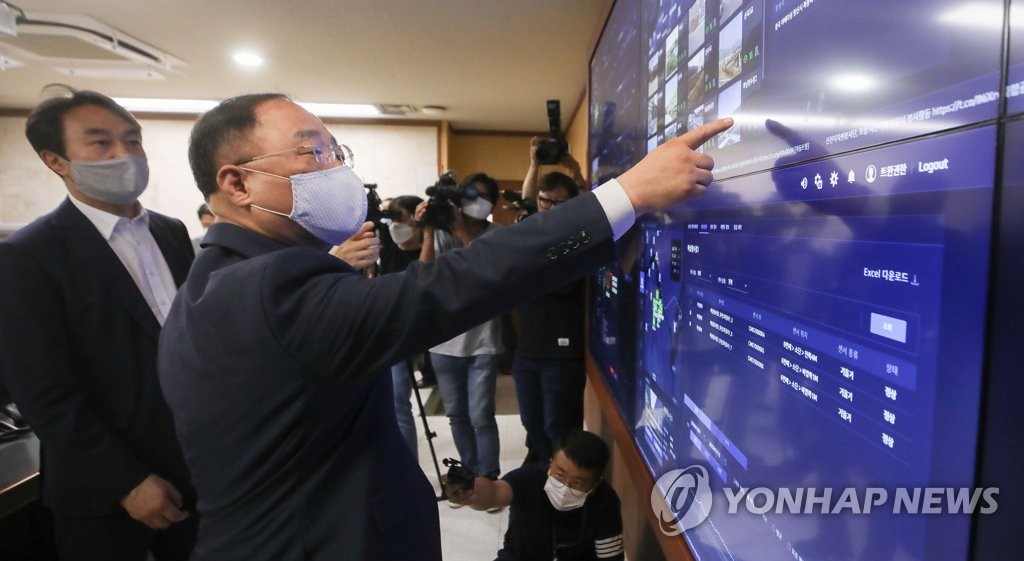 The system uses digital sensors to allow K-Water to remotely check water usage in households instead of making physical visits and efficiently manage the water supply.

LG Uplus Corp. also partnered with the city of Gumi, 200 kilometers south of Seoul, last month to establish a 5G network in the city's industrial complex.

A spokesperson for LG Uplus said the company is currently focusing on installing 5G infrastructure in urban areas this year to support the government policy.

The three telecom operators said this week they will invest up to 25.7 trillion won to establish a nationwide 5G network by 2022.

Amid the pandemic, South Korea's economy shrank 1.3 percent in the first quarter from the previous quarter.