SEOUL, July 21 (Yonhap) -- Amid the hype for Starbucks Korea's small suitcases offered under its reward program, customers' competition to get camping chairs, another promotional item, ran high Tuesday ahead of an end to the seasonal event.

On May 21, Starbucks kicked off a summer promotional event that will run until Wednesday to give limited editions of goods to customers under its "e-frequency" rewards program.

To secure one of two "summer ready bags" or one of three foldable "summer chairs," a person needs to drink 17 beverages, including three seasonal ones.

It's a seasonal event, but this year, the craze to secure pink or green summer ready bags was high enough to see the formation of long queues in front of Starbucks outlets nationwide at dawn.

As stockpiles for the suitcases recently ran out, customers' last-minute race to get camping chairs heated up earlier in the day.

People's repeated search for the number of remaining chairs with the Starbucks app caused the application's functions to freeze at one point, according to the company.

"Since I got a summer chair in early June, I've made several attempts to receive a green bag. But I gave up after seeing some 50 people waiting in front of me when I arrived 30 minutes earlier than the opening hour," said a 39-year-old office worker surnamed Jung.

Indeed, demand for the summer ready bags, in particular the pink ones, ran high, riding on the popularity of products targeting "home camping clans" during the new coronavirus outbreak.

In late May, one customer purchased 300 cups of coffee at once at a Starbucks branch in Seoul's financial district of Yeouido. Snatching 17 summer bags, the person reportedly took just one cup and left the store. The move caused an uproar as the remaining 299 cups were said to go down the drain. 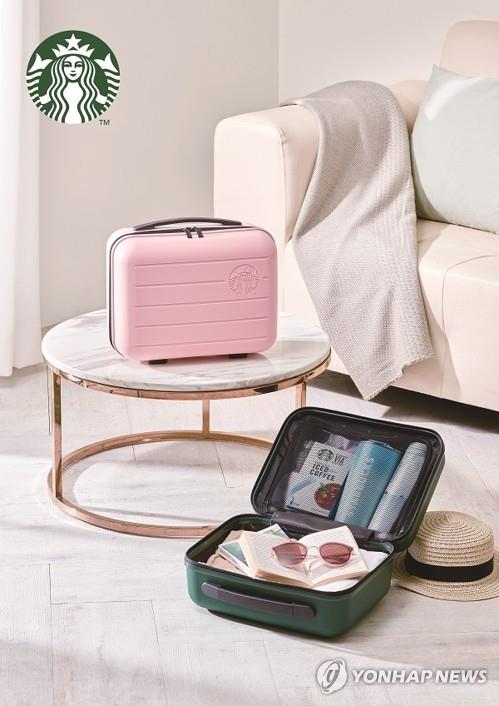 The Starbucks gift items and stamp-like e-frequency rewards are being traded on local secondhand marketplace applications, including Danggeun Market.

A Danggeun Market user put the pink suitcase on sale for some 120,000 won Tuesday.

"I sold 10 e-frequency stamps that I've collected for 3,500 won within three minutes of putting them up for sale," said a 29-year-old office worker surnamed Lee. "I got two Starbucks chairs earlier this month, but it's hard to explain why people, including me, have been so into the craze."