SEOUL, July 24 (Yonhap) -- For a refresh, Rhee Haeri, an office worker in Seoul, used to visit a neighborhood cafe where she could pet a meerkat, a unique experience in the country.

"I loved visiting such cafes and looking at rare animals," Rhee said.

But she recently has had to think twice about dropping by the exotic animal cafe after hearing about where the COVID-19 outbreak could have originated.

"Now I have some doubts about the safety of such places after hearing that the new coronavirus could have come from wild animals," she said.

With the new coronavirus pandemic unrelenting across the globe, she is among those who is having second thoughts about visiting places at risk of virus contagion.

Although there is no clear evidence what caused the COVID-19 pandemic, some argue that bats or other wild animals are to blame. 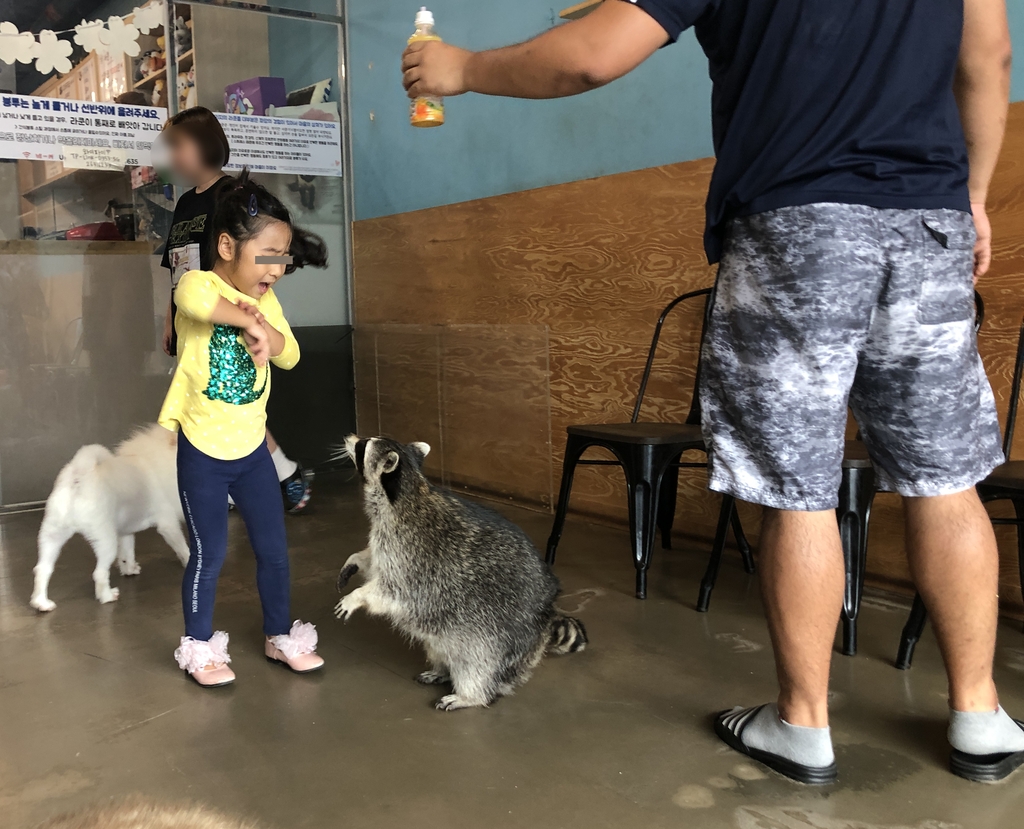 Although some wild animals directly imported here are said to have been tested for the virus, activists say that having animals tested does not necessarily mean that such cafes are totally safe to contagious diseases carried by animals.

"Such places are highly vulnerable to animal diseases, which we are not even aware of," Lee Hyung-ju, who represents Animal Welfare Awareness Research and Education, a Seoul-based activist group, told Yonhap News Agency.

"The animals are being imported without thorough and proper examinations," Lee said. "On top of that, there are no regulations on how animals should be treated. They are in a completely legal blind spot." 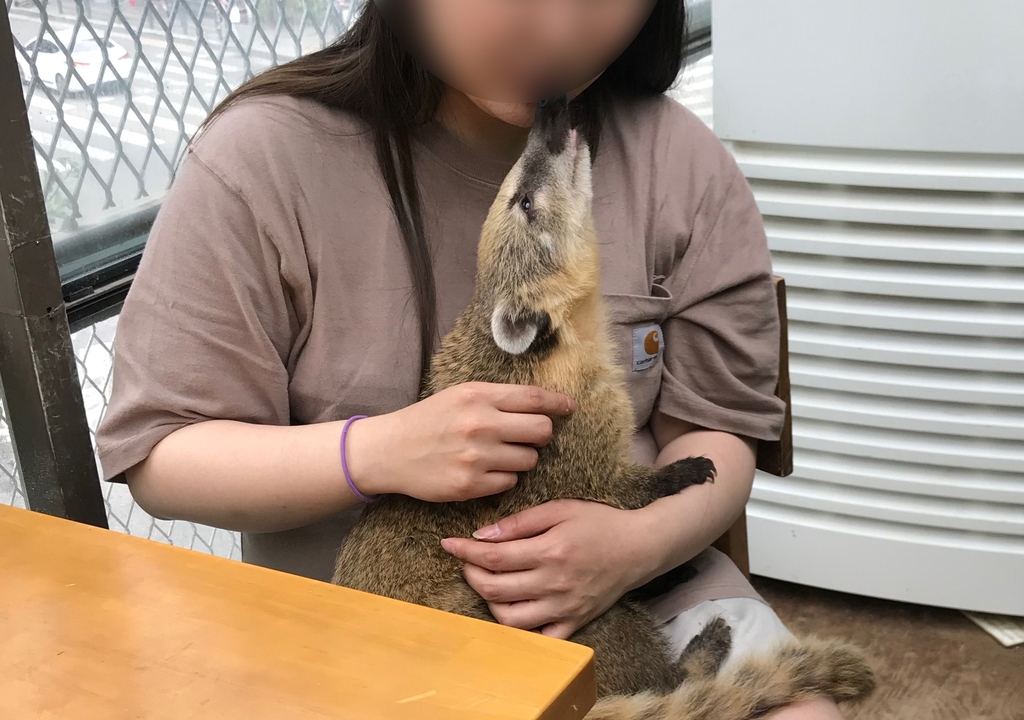 The current rule has a loophole as it only specifies that dogs, cats, rabbits, parrots, guinea pigs and hamsters be registered with related authorities. Accordingly, places raising more exotic species, such as raccoons and meerkats, are not adequately regulated.

Curious people have been looking for ways to get up close with exotic species, and that's led to a rise in the number of such cafes.

There were 35 cafes where visitors could meet animals usually only found in the wild in 2017. Just two years later, the number jumped almost twofold to 68.

But there is no official data available on the exact number of animal-themed cafes, as such places are registered as different businesses by taking advantage of the loopholes.

"Some places are even registered as snack bars that sell bottled drinks and packaged foods to avoid basic sanitary regulations," Lee said.

Concerns about the spread of contagious diseases by animals to humans through such cafes are not overstated, according to experts.

"When animals are brought into the country from overseas, authorities here just examine them for five days with naked eyes, without carrying out proper medical checkups," Choi said. "This makes the country especially vulnerable to foreign diseases." 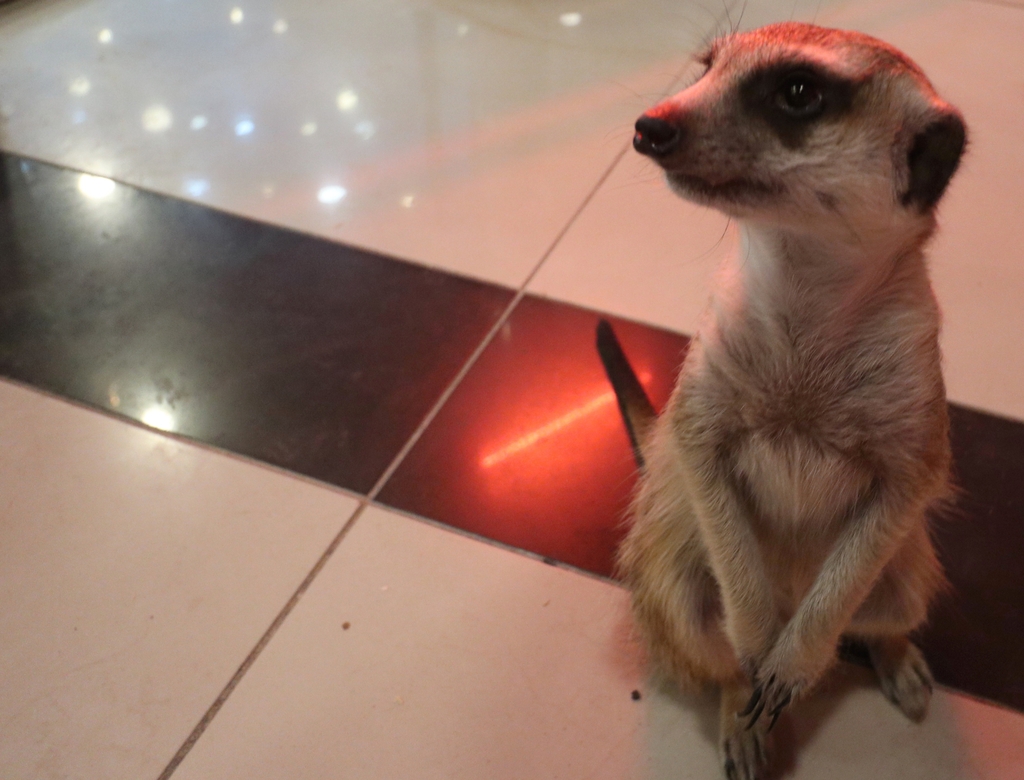 Choi said the Middle East Respiratory Syndrome (MERS), which haunted the globe in the early 2000s, was also a variation of the coronavirus that spread through camels.

The vet who represents Humane Vet, an animal activist group, said animal cafes are especially dangerous as they raise different kinds of species for display without proper medical knowledge.

"At large-scale zoos, animals are normally prevented from having direct contact with visitors. But this is not the case for small-scale businesses," Choi added.

South Korea is currently making various steps to come up with regulations for such business establishments. The measures include adopting a "whitelist" that specifies which animals can be owned by animal cafes.

"Previously, regulations related to exotic animals mostly focused on conserving the ecosystem but overlooked their vulnerability to diseases," an official from the Office for Government Policy Coordination said last month.

Animal activists even say animal cafes should be closed not just for the sake of public health but for bigger causes as well.

"Even dogs being raised at homes suffer from stress when strangers try to touch them. We cannot imagine how much pain these animals normally found only in the wild are going through at such businesses," Lee said. "The pandemic may bring us a silver lining if we begin to become more aware of animals' rights."