The National Pension Service (NPS), the biggest institutional investor in South Korea, newly bought stakes of 5 percent or more in 24 companies traded on the country's major and secondary bourses as of Friday, according to CEO Score.

DoubleU Games Co. was the pension provider's top pick as it acquired a 10.2 percent stake in the local game developer. 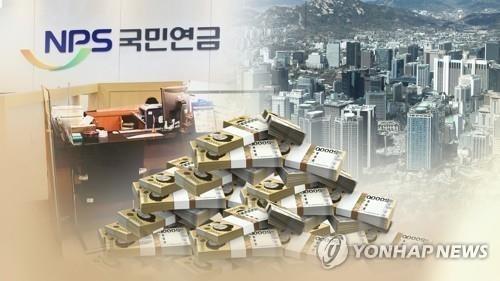 The state pension's holdings of drug and biopharmaceutical companies were valued at 6.04 trillion won (US$5.05 billion) as of Friday, up 71 percent from the end of last year.

In contrast, the pension provider cut its stake in major retailer Shinsegae by 5.97 percent over the cited period, with its holdings of top movie theater operator CJ CGV dipping 5.01 percent.

The NPS also reduced its exposure to leading air carrier Korean Air Lines Co. by 4.63 percent as the company was pounded by the coronavirus pandemic.

According to CEO Score, the NPS held interests of 5 percent or more in 302 companies, down 13 from end-December. The value of its holdings, however, rose 3.3 percent to 127.9 billion won.

The NPS is one of the largest pension funds in the world, with assets under its management hovering above 700 trillion won.
(END)