SEOUL, July 24 (Yonhap) -- About a year ago, leaders of the two Koreas and the United States had an unprecedented brief meeting at the Demilitarized Zone, coming after two Washington-Pyongyang summits. Expectations were high that a peace regime on the Korean Peninsula, which has been technically in a state of war for nearly seven decades, was just around the corner.

But a few months later, hopes were shattered as the U.S.-North Korea nuclear negotiations reached a deadlock as dozens of previous peace talks ended in vain. 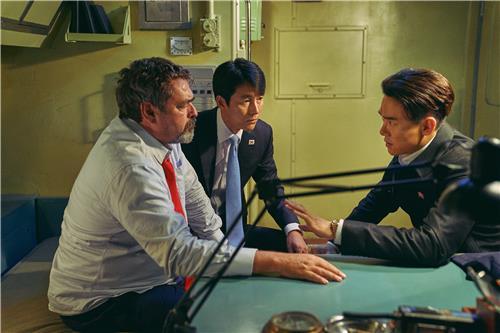 The action adventure film "Steel Rain 2: Summit" dramatizes a rare tripartite summit on North Korean soil to officially end the 1950-53 Korean War and clinch a peace treaty, after many twists and turns behind the scenes.

South Korean President Han Kyeong-jae, played by Jung Woo-sung, participates in the historic meeting with U.S. President Smoot (Angus Macfadyen), whose first name isn't given, and North Korean leader Cho Son-sa (Yoo Yeon-seok). His job is simply to mediate the two obstinate leaders, who don't want to be outdone by the other.

On the verge of the breakdown of the peace talks, a North Korean general (Kwak Do-won), who strongly opposes Cho's appeasement policy, stages a coup and kidnaps the three leaders in a cabin of a nuclear-powered submarine.

In the small compartment, the second round of the tripartite summit begins. Smoot and Cho blame each other on the current touch-and-go situation on the Korean Peninsula, while the South Korean president tries to prevent the situation from getting out of hand.

At the same time, the kidnapping of the leaders of three nations disrupts the power balance in East Asia, and the U.S., China, Japan and the two Koreas bring their strategic weapons to the East Sea. 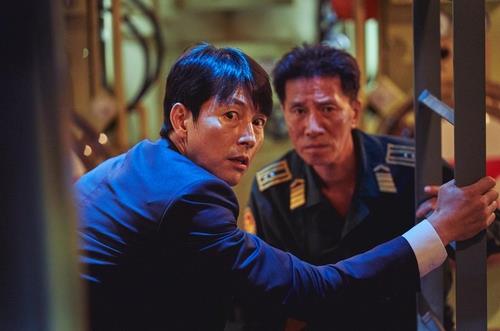 Like its prequel "Steel Rain" (2017), "Steel Rain 2" starts with a military coup in North Korea, which intensifies the risk of an all-out war on the Korean Peninsula.

But the 2020 film expands its horizon to the regional level, depicting East Asian geopolitics among regional superpowers in a realistic way through the South-North-U.S. summit talks.

President Han, invited to the three-party summit meeting for a peace treaty, knows that he has a limited role at the event as South Korea is not a signing party of the 1953 Armistice Agreement.

The movie pictures Han's character as a clearheaded statesman who seeks ways to prevent a hot war during the situation strained to the point where any slight incident could touch off open hostilities.

Jung shows soft and flexible charisma as an arbitrator or a balancer in the new movie, rarely resembling his role of a North Korean agent in "Steel Rain."

The onscreen chemistry of Macfadyen and Yoo also creates natural humor and wit that helps the audience understand the difficult and decadeslong North Korean issues.

In addition, the underwater battle scenes involving submarines from North Korea and Japan is the highlight of the latter part of the film that makes people sit on the edge of their seats.

Director Yang Woo-suk, who worked on the original web comic trilogy "Steel Rain" that began in 2011, said he wants to simulate possible futures of the Korean Peninsula, the world's last remaining Cold War divide, in the "Steel Rain" series and show that the peace regime is what the two Koreas have to achieve in the end.

"I want to call "Steel Rain 2" a complementary sequel to its predecessor as the two films are cinematic simulations of the Korean future," he said in a press conference on Thursday. "But we can't create peace of our own freewill, because we didn't win it by ourselves. I want to present that reality in the film."