SEOUL, July 27 (Yonhap) -- South Korean civic groups launched an international signature campaign calling for a formal end to the Korean War on Monday, as the nation marked the 67th anniversary of the signing of the armistice.

A total of 324 groups joined the movement aiming to collect 100 million signatures around the world by July 27, 2023, the 70th anniversary of the truce agreement.

"Peace efforts on the Korean Peninsula are retreating as the hard-won agreements between the two Koreas have not been implemented properly," they said in a statement. "Though it is late, the governments of concerned countries should now come forward earnestly and responsibly to end the Korean War." 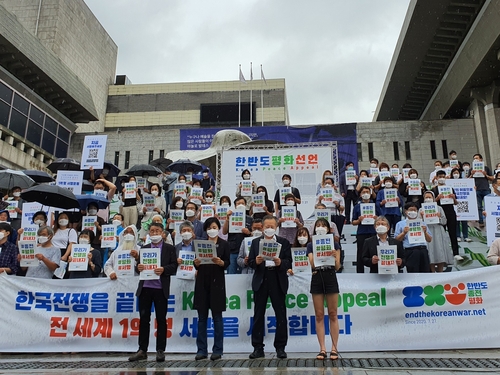 They were referring to summit agreements in 2018 between President Moon Jae-in and North Korean leader Kim Jong-un, which promised efforts to establish a permanent peace on the peninsula.

South and North Korea are technically at war because the 1950-53 war was halted by an armistice, not by a peace treaty.

Lee Tae-ho, leader of the Civil Society Organizations Network in Korea, said the campaign's goal is to "formally end the war within three years."

"Peace-loving citizens should invest limited resources in efforts for citizens' safety and the sustainable environment, not wasting them in preparing for war," he added.

Participants include the People's Solidarity for Participatory Democracy, Citizens' Coalition for Economic Justice, and other leading nongovernmental organizations and religious groups.

They plan to deliver collected signatures to the governments of the two Koreas, the United States and China, as well as the United Nations.