SEOUL, July 31 (Yonhap) -- His command still not where it should be, Toronto Blue Jays' South Korean starter Ryu Hyun-jin has suffered his first loss of the 2020 season.

The left-hander was charged with five runs on nine hits in 4 1/3 innings against the Washington Nationals, as the Blue Jays lost 6-4 at Nationals Park in Washington on Thursday (local time). Ryu struck out five and walked one.

This was Ryu's second outing of the season. In his Opening Day start last week against the Tampa Bay Rays, Ryu allowed three earned runs in 4 2/3 innings in a 6-4 Toronto victory. 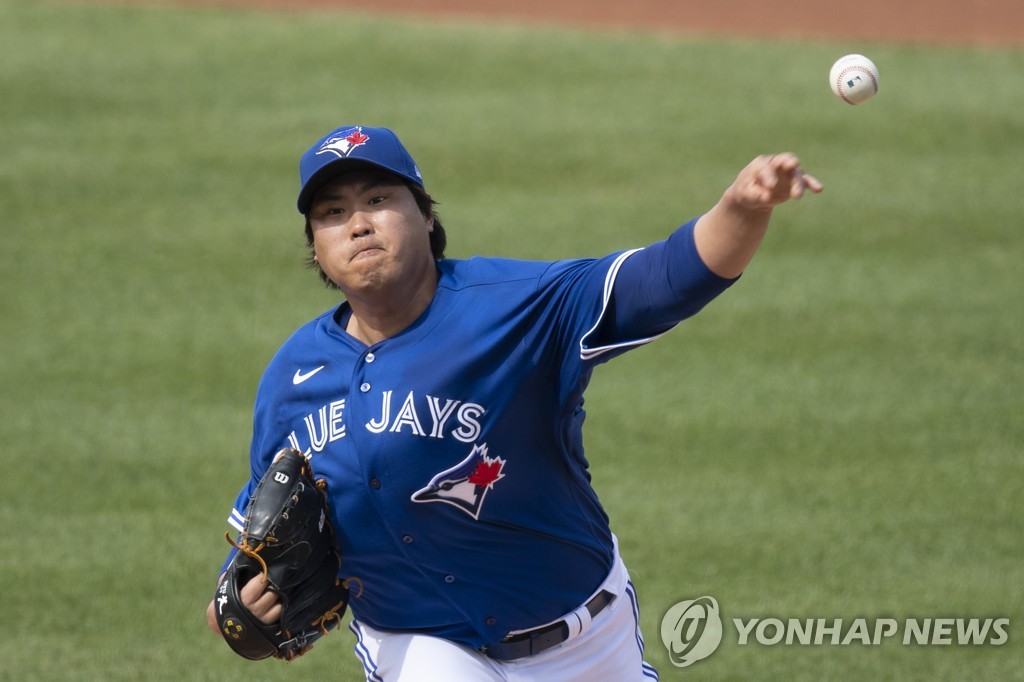 Ryu's ERA now sits at 8.00. He led Major League Baseball with a 2.32 ERA last year while pitching for the Los Angeles Dodgers. He also finished second in the National League Cy Young Award voting, and parlayed that into a four-year, US$80 million contract with the Blue Jays in December.

It's the largest free agent deal that the Blue Jays have awarded to a pitcher, but Ryu hasn't lived up to that contract yet. In this truncated, 60-game season during the coronavirus pandemic and an expanded, 16-team playoff format, every game counts. The Blue Jays can ill afford to have their No. 1 starter struggle out of the gate.

Against the Nationals, the Blue Jays went up 1-0 with Lourdes Gurriel Jr.'s RBI single in the bottom first, but Ryu frittered away that lead in the third inning.

Ryu got out of a two-out, two-on jam in the second inning by striking out Michael A. Taylor, but he couldn't escape another two-out rally in the third.

He gave up consecutive one-out singles to Adam Eaton and Starlin Castro. Ryu got Asdrubal Cabrera to fly out to right field, but then Kurt Suzuki smacked a high sinker for a double to cash in both runners and put the Nationals up 2-1.

More trouble loomed for Ryu in the fourth. Carter Kieboom led off with a single, and two batters later, Taylor drilled a two-run homer to center field for a 4-1 Washington lead.

Taylor had been 0-for-13 with seven strikeouts against Ryu before that home run.

The Blue Jays got a run back in the bottom fourth on Teoscar Hernandez's solo home run, but Ryu continued to struggle in the top fifth.

Cabrera followed Castro's leadoff double with a two-bagger of his own for a 5-2 lead. Ryu struck out Suzuki looking but that was the last batter he faced. He threw 66 of his 93 pitches for strikes.

Reliever Thomas Hatch came on to stop the bleeding, but the Blue Jays couldn't rally from the hole.

For the second straight start, Ryu's main issue was his fastball command. Because he isn't a flamethrower who will blow anything by hitters, Ryu has to locate his fastballs on the corners and keep hitters off balance with the likes of changeups, curves and sliders.

Against the Nationals, with Ryu consistently missing the zone with his fastballs, hitters laid off those pitches and sat on breaking balls or off-speed pitches.

None of the nine hits against Ryu came against fastballs -- five against changeups, two against sliders, one against a curveball and another against a sinker that didn't sink.

In a post-game interview, Ryu said he felt the drop in the velocities of his pitches. "I'll improve (my pitches) in the future," the pitcher said.

"I threw most of my pitches as curves due to a drop in my throwing velocity, but the batters performed well," he said. "I should have thrown them off timing-wise with the curveballs but failed to do so." 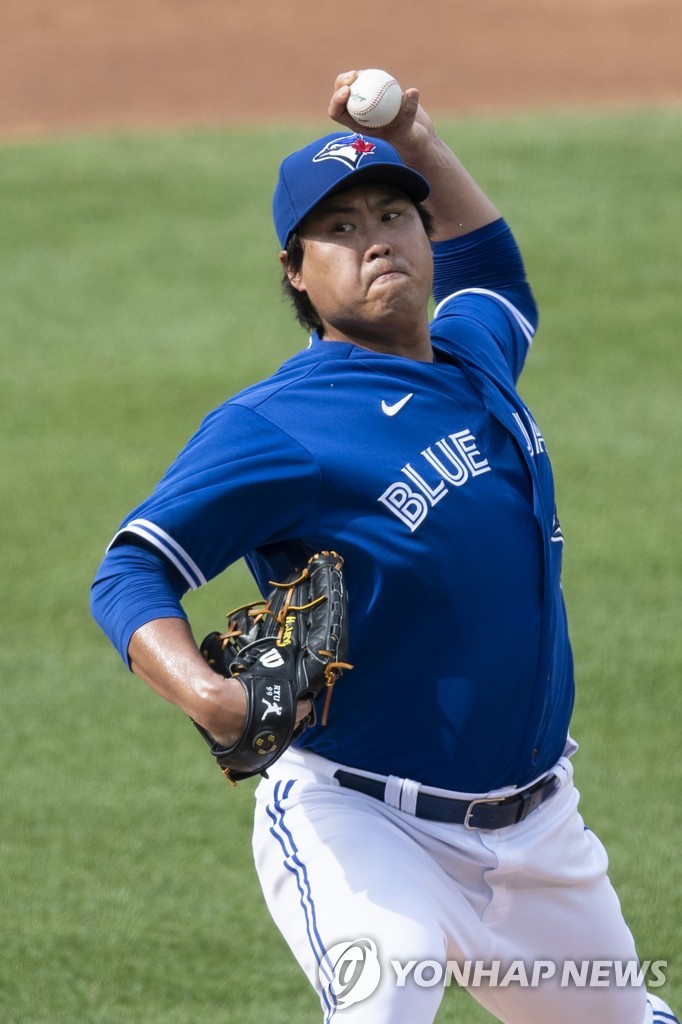 This was the Blue Jays' "home game," and they batted in the bottom half of innings. Earlier this month, the Canadian federal government rejected the Blue Jays' plan to play home games in Toronto and have visiting American teams flying in and out of the city because of COVID-19 concerns. The club's hope of sharing PNC Park with the Pittsburgh Pirates was later squashed by the Pennsylvania state health authorities.

The itinerant Blue Jays settled on Sahlen Field, their Triple-A park in Buffalo, New York, as their temporary home, but the stadium is currently undergoing an upgrade to meet major league standards and won't be ready until later in August. 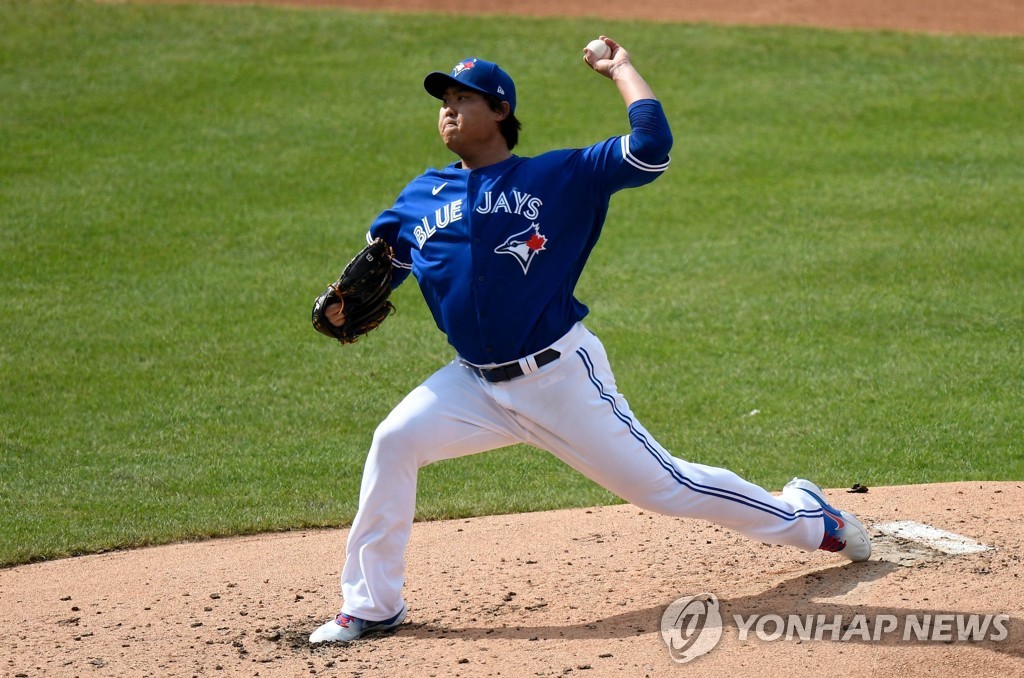