Ulsan's undefeated run came to a screeching halt at 11 matches. They've lost only two matches out of 21 all season, and both of them have come against Jeonbuk, who won the first meeting 2-0 on June 28. 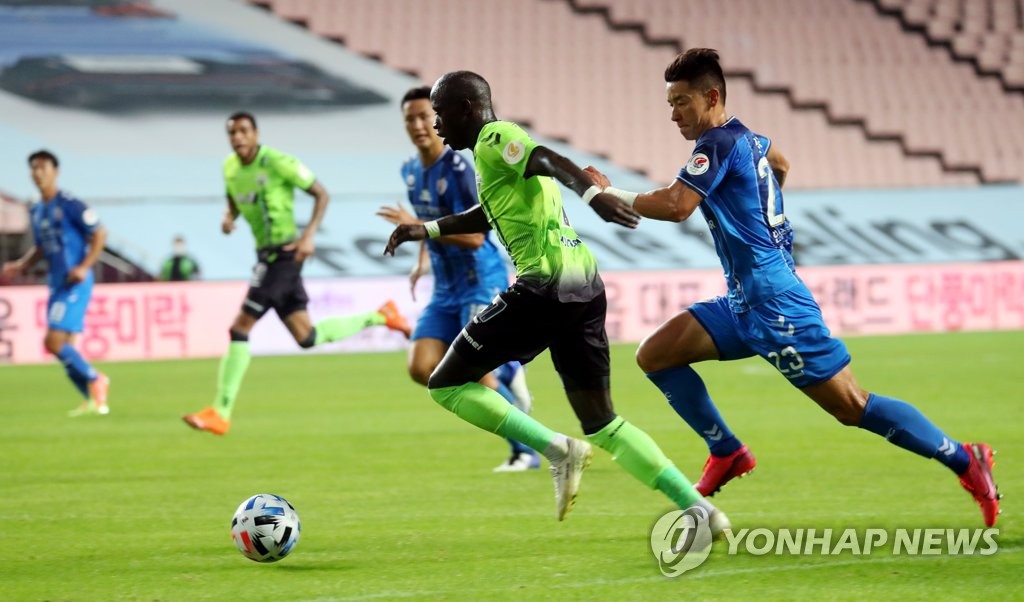 Jeonbuk are going for an unprecedented fourth consecutive title, while Ulsan are chasing their first championship since 2005.

Last season, Ulsan sat in first place heading into the final day of the season, but snatched second place from the jaws of a championship. The combination of Ulsan's 4-1 loss to Pohang Steelers and Jeonbuk's 1-0 victory over Gangwon FC handed the trophy to Jeonbuk.

Jeonbuk came into this crucial match mired in their worst stretch of the season. They had gone winless in a season-high three matches, having surrendered seven goals in that span.

Ulsan failed to take advantage of Jeonbuk's struggles, settling for two consecutive draws at the start of September and holding just a five-point lead heading into Tuesday.

Jeonbuk opened the scoring before Ulsan knew what hit them. About 70 seconds in, Barrow sent a seemingly innocuous cross from left wing. Fellow midfielder Han Kyo-won cut in toward the net trying to redirect the pass, but as the ball skidded past him, Han ended up screening goalkeeper Jo Hyeon-woo. Jo was completely fooled and watched helplessly as the ball rolled to the far corner.

Jeonbuk continued to dominate possession while keeping Ulsan at bay at the other end. 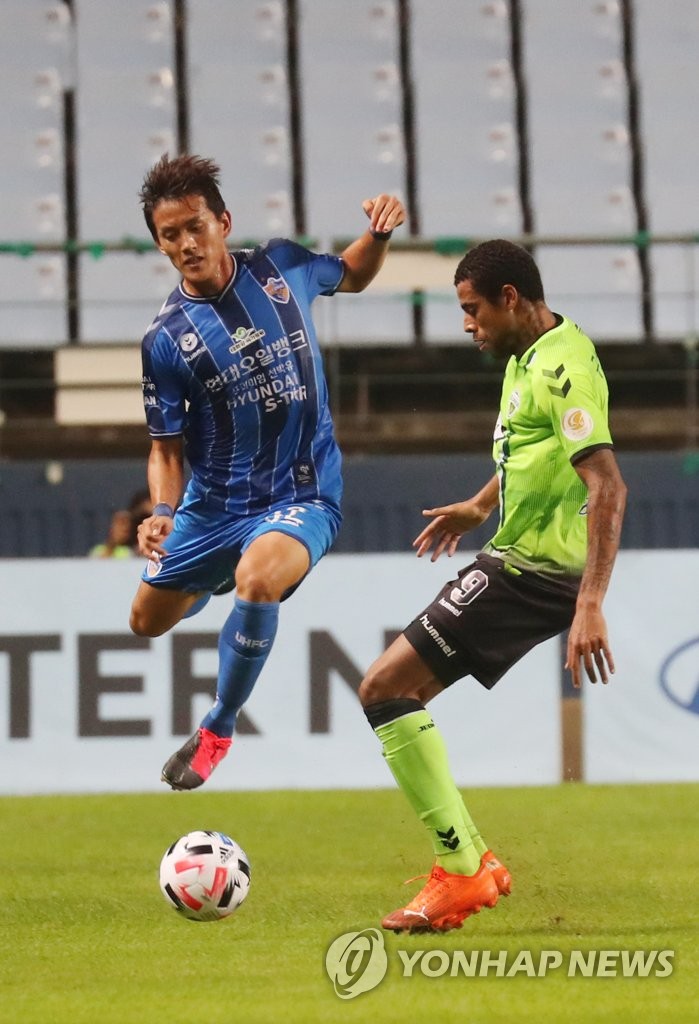 Junior Negrao, Ulsan's top marksman and the league's leading scorer, was held out of the starting lineup. Trying to wrestle back control of the contest, Ulsan coach Kim Do-hoon brought the Brazilian forward off the bench in the 28th.

Just moments later, Ulsan midfielder Yoon Bitgaram took a free kick from outside the center of the box and forced Song Bum-keun to make a tough diving save.

That attempt appeared to jolt Ulsan's stagnant offense back to life. And they nearly leveled the score in the dying moments of the first half.

During injury time, Shin Jin-ho's volley from the point-blank range went off the body of Jeonbuk defender Hong Jeong-ho and out of play.

On the ensuing corner, Davy Bulthuis secured a rebound after a shot attempt but Song got a piece of Bulthuis' right-footed strike and had the ball go off the right goal post.

Jeonbuk tried to double the lead five minutes into the second half. Han Kyo-won teed one up for fullback Lee Yong, who stepped into the low, hard shot that Jo turned aside for his best save of the match. 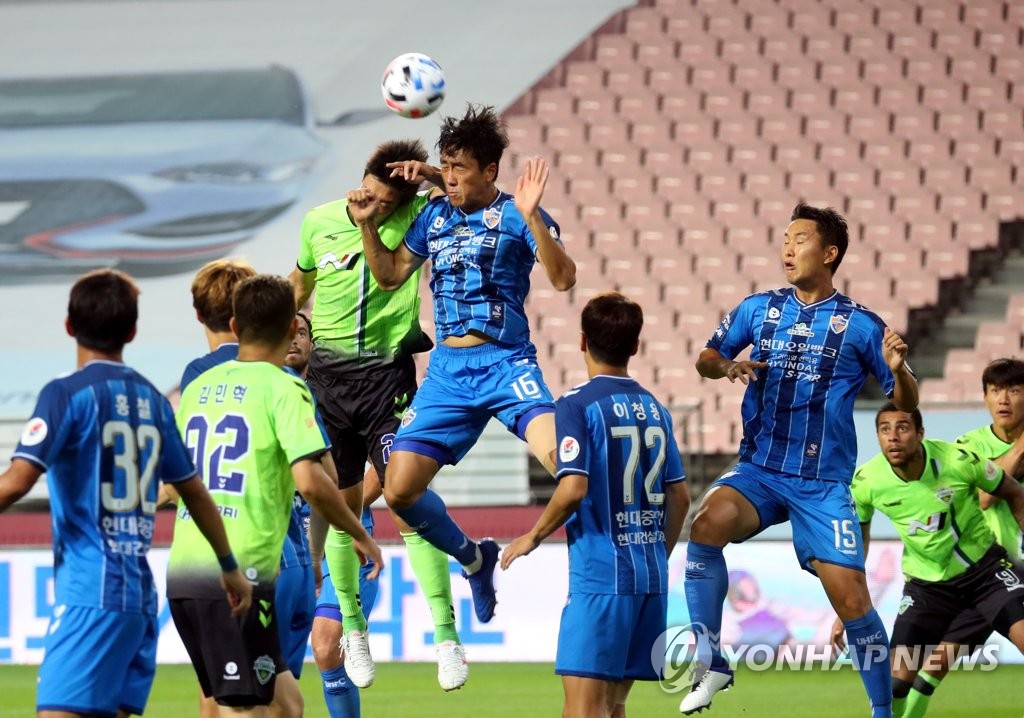 Six minutes later, Jeonbuk's Gustavo connected with Takahiro Kunimoto on a counterattack opportunity but the Japanese midfielder airmailed his shot well over the target.

Jeonbuk finally got their second goal in the 63rd, with Barrow and Han once again being the principal figures.

Kunimoto sent Barrow deep into the box with a pretty pass, and Barrow crossed for the charging Han, who snuck in behind two defenders and scored off the leg of Jo for a 2-0 lead.

Attacking midfielder Bjorn Johnsen replaced defensive midfielder Won Du-jae for Ulsan in the 70th minute, though the substitution didn't amount to much.

Ulsan salvaged a goal in injury time as Junior Negrao converted a penalty for his league-best 23rd goal. He has now scored against every opponent this season, though the accomplishment was overshadowed by the dispiriting loss. 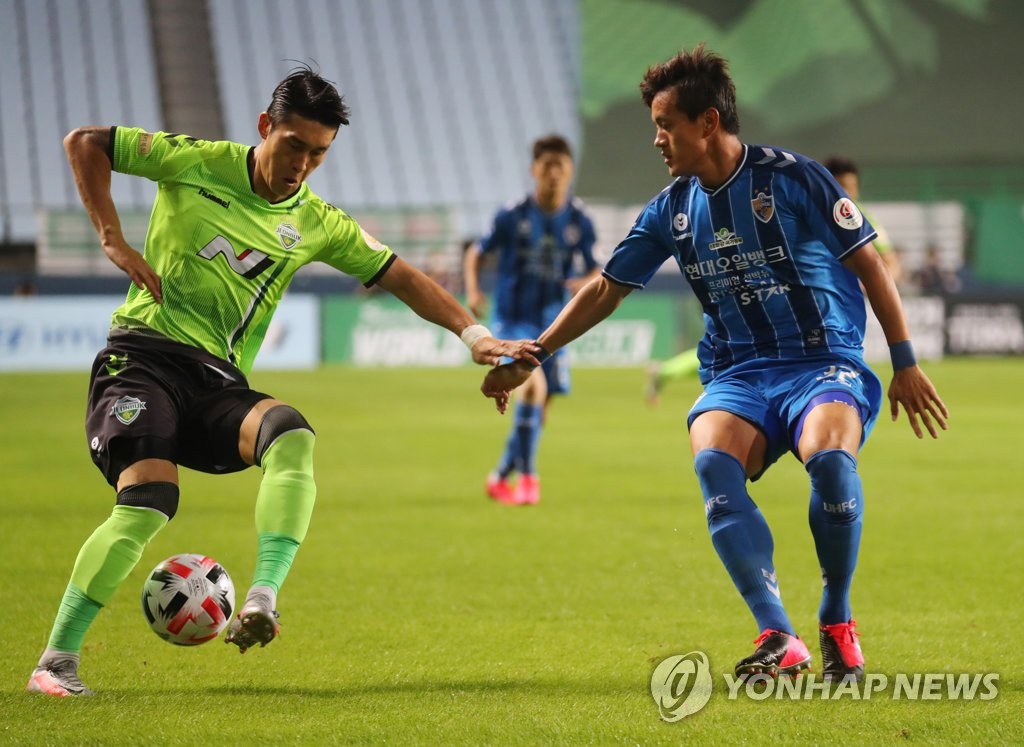