How else to explain Ulsan's continued struggles against Jeonbuk in K League football?

Jeonbuk got the better of Ulsan again on Tuesday, prevailing 2-1 in a clash of the two best clubs this season. Mo Barrow scored the opening goal about 70 seconds in and assisted on Han Kyo-won's second-half insurance goal. 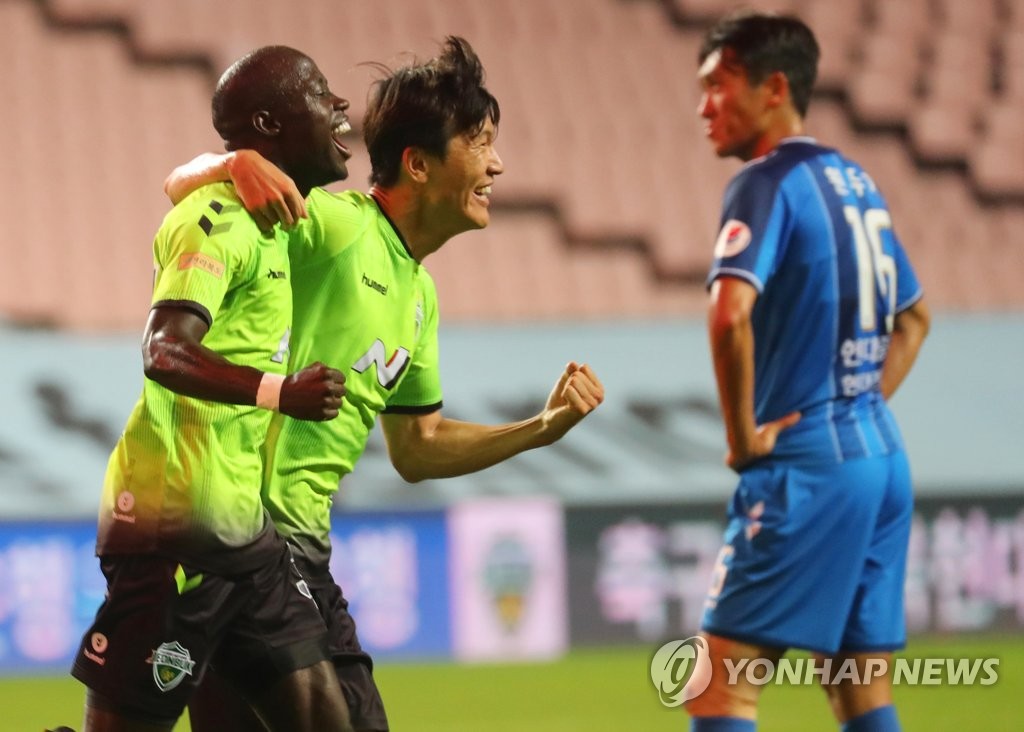 In their first meeting of this season on June 28, Jeonbuk handed Ulsan their first loss 2020 with a 2-0 win. Ulsan had gone 11 matches since then without losing once, and it was Jeonbuk that ended the undefeated run Tuesday.

Ulsan have managed just one win in their last 10 meetings against Jeonbuk.

More importantly, Tuesday's result tightened the race at the top between these two clubs, as Jeonbuk have cut the gap from five points to two points, at 47-45, with six matches left this season.

"I think we maintained a good balance between offense and defense for the whole match," Jeonbuk coach Jose Morais said. "If we can play like this in upcoming matches, we could win the title." 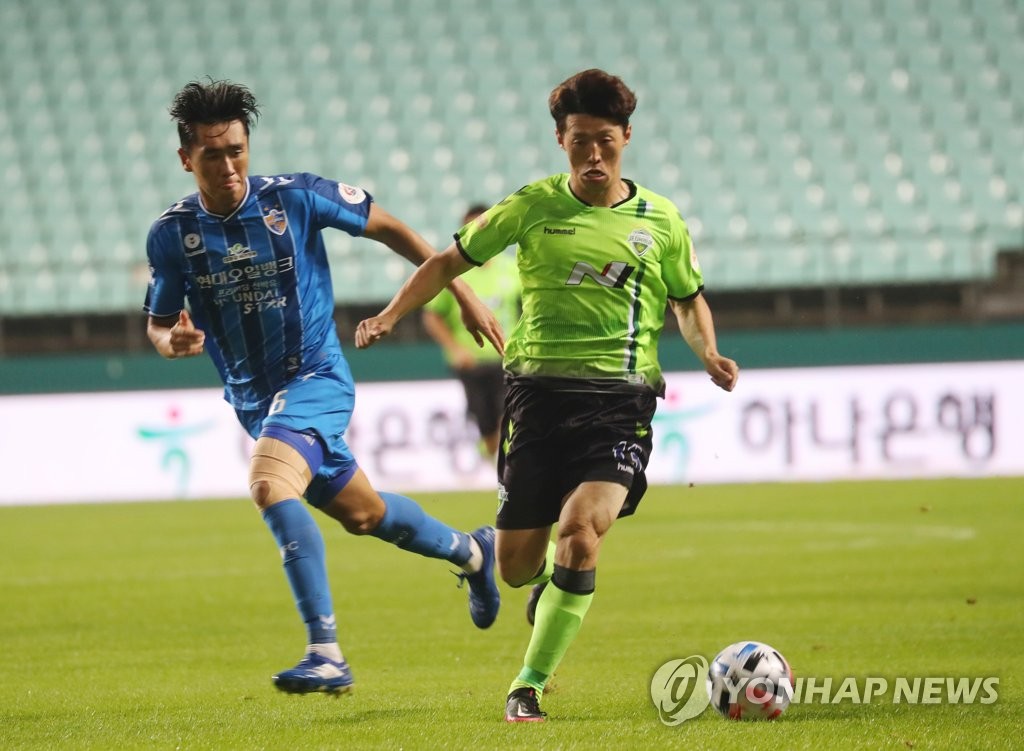 After playing this coming Sunday, the 12 teams in the K League 1 will be split into two tiers: the top six into "Final A" and the rest into "Final B." Teams will then play five matches within their own group to close out the season.

Though match schedules will be announced later, Jeonbuk and Ulsan are assured of another showdown this season, most likely with a championship on the line.

Jeonbuk are trying to win their fourth consecutive title, something that no K League club has accomplished. During their dynasty run, this year's team may be their weakest. And with key defender Kim Jin-su bolting for Saudi Arabia's Al-Nassr FC in August, Jeonbuk had gone winless in their season-high three matches prior to Tuesday.

Ulsan, boasting the league's deepest roster, should have run away with the title by now. Instead, they were held to consecutive 1-1 draws by underdogs Gwangju FC and Daegu FC over the past two weeks.

And those squandered opportunities came back to bite them Tuesday. Giving up a soft goal against Barrow just 70 seconds after the opening kickoff didn't help.

Ulsan head coach Kim Do-hoon said he wanted to play a tight defensive contest, but allowing the first goal so early ruined that plan. He acknowledged he "may have been overthinking" during his preparation for the match.

He also said his players have to overcome a mental block against Jeonbuk.

"I think my players are good enough to beat Jeonbuk, but the difference was in the level of confidence," Kim said. "And it's my fault that I didn't help them feel more confident." Forced to play catchup all match, Ulsan began to play with some energy after the half-hour mark. They outshot Jeonbuk 10-3 in the first half, but couldn't solve goalkeeper Song Bum-keun, who came up huge in a goalmouth scramble moments before the break.

Morais said he was disappointed with a late lapse in concentration that led to the penalty, but he was mostly pleased with his team's defensive effort.

"If you watch all successful teams, they have strong defense," he said. "I had my wingers, like Han, come down and help out on defense, because if offensive players can go the extra mile on defense, it will help us win matches."

Ulsan let the championship trophy slip through their fingers last year, in one of the most stunning collapses in South Korean sports.

Heading into the season finale, Ulsan held down the top spot over Jeonbuk, 79-76. All they needed was a draw against Pohang Steelers and they would have their first title since 2005.

Instead, Ulsan fell to Pohang 4-1, while Jeonbuk beat Gangwon FC 1-0 to climb to a 79-79 tie in points. Jeonbuk edged out Ulsan in the first tiebreaker, goals scored, by 72-71, to become just the second club to pull off a "three-peat" in K League history.

In the final stretch this year, Ulsan now hold a two-point lead over Jeonbuk. Maybe Jeonbuk have Ulsan right where they want them.

"It won't be a true championship for us unless we beat Jeonbuk in the process," Kim said. "We'll try to win the next one against them."

Ulsan have the most runner-up finishes in league history with eight. 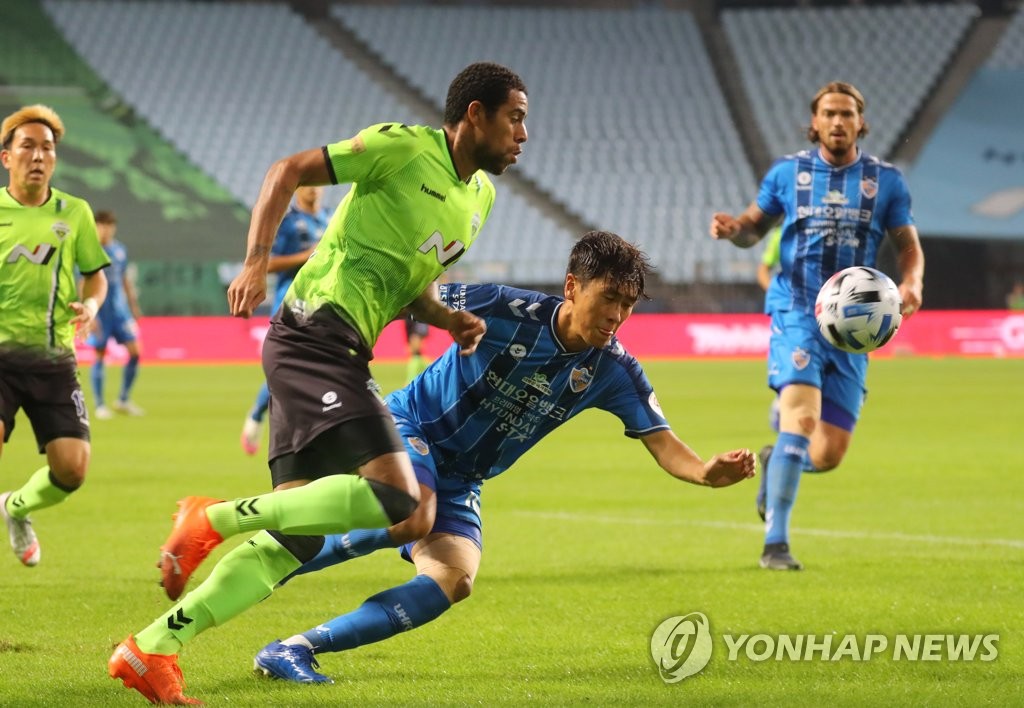