SEOUL, Sept. 16 (Yonhap) -- K-pop phenomenon BTS was the most talked-about musical act on Twitter in the United States during the past six months of the novel coronavirus pandemic, U.S. media reported Wednesday.

According to the news reports from outlets including Variety magazine, BTS topped the list of 10 most tweeted-about artists by U.S. users in the "Twitter From Home" report, which tracked tweet activities from March 1-Sept. 1.

Rapper Kanye West, who in July announced that he would run for president, finished second, followed by Beyonce, Drake and Megan Thee Stallion.

Two other K-pop acts, NCT and ATEEZ, also made the top 10 list at No. 6 and No. 8, respectively, along with Bad Bunny, Cardi B and Harry Styles.

During the six-month period, BTS has been busy, creating a global buzz despite a series of concert cancellations.

After releasing its fourth album, "Map of the Soul: 7," in late February, the septet dropped the Japanese-language album "Map of the Soul: 7 — The Journey" in July. It also hosted a paid online concert, "Bang Bang Con: The Live," in June, attracting 756,000 viewers in 107 countries and territories around the world.

In August, it released "Dynamite," its first English language track. The song hit No. 1 on the Billboard Hot 100 singles chart for two consecutive weeks. 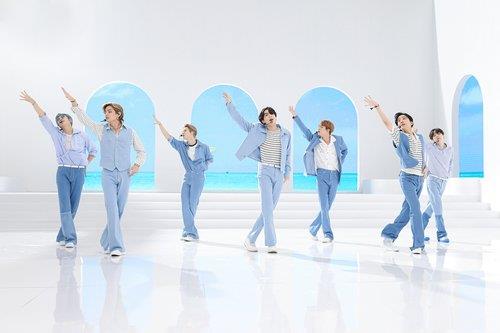