SEOUL, Sept. 17 (Yonhap) -- South Korea will hold a ceremony this week to commemorate the 70th anniversary of the Philippines' participation in the Korean War, the veterans affairs ministry said Thursday.

The Southeast Asian country sent around 7,420 ground troops to help defend South Korea during the 1950-53 conflict, with the first batch arriving at a port in the southern city of Busan on Sept. 19, 1950, according to government data.

It was the third country in the world to send troops after the United States and Britain. Of the Philippine troops, 112 were killed and 15 went missing, the data showed.

This week's ceremony will be held at the Korean War Monument to the Philippine Armed Forces in the city of Goyang, north of Seoul, Friday to pay tribute to the fallen soldiers and to express gratitude for their sacrifice and commitment, the Ministry of Patriots and Veterans Affairs (MPVA) said.

In an expression of gratitude, South Korea sent 50,000 face masks to Korean War veterans in the Philippines in May.

"My father's soul must be in Korea," the veterans ministry quoted Isabelita Yap-Aganon, daughter of Captain Conrado Yap who was killed in action in April 1951, as saying. "I hope more Koreans and Filipinos visit each other's country and have better relations."

This year marks the 70th anniversary of the war, in which around 1.95 million people from 22 countries participated to help South Korea fight North Korea backed by the Soviet Union and China. 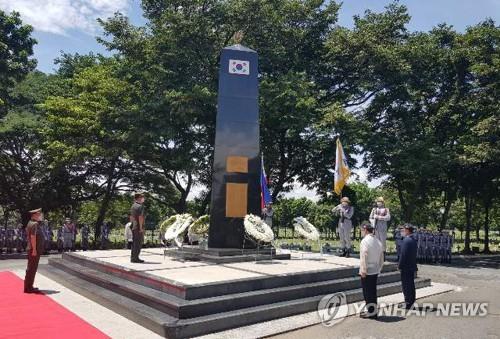