Park is scheduled to retire as JSC chairman next week after serving in the post since October 2018. No official term of office is set, but the JCS chairman is supposed to serve for around 18 months to two years.

"Freedom is not free. I feel what this means for the past two years. Korea is technically at war, and the inter-Korean relations as well as the U.S.-North Korean ties are like walking on thin ice," Park said in his speech.

"At this critical juncture, Gen. Abrams has played a key role for peace on the Korean Peninsula ... The general and I have continued communication and displayed great teamwork," Park recalled, expressing deep gratitude to U.S. service members for their commitment to the staunch combined readiness posture.

"The South Korea-U.S. alliance has never backed down. It will continue to improve down the road," the outgoing chairman said.

Abrams said Park contributed to the relaxation of tensions along the Demilitarized Zone (DMZ) that bisects the two Koreas and achieved progress in the envisioned transfer of the wartime operational control (OPCON) of South Korean troops from Washington to Seoul.

His leadership also helped boost a strong combined defense posture and ensured the unbreakable alliance between the two sides, according to Abrams.

Won In-choul, who currently leads the Air Force, was nominated as Park's successor last month, and his National Assembly confirmation hearing is set to take place on Monday. 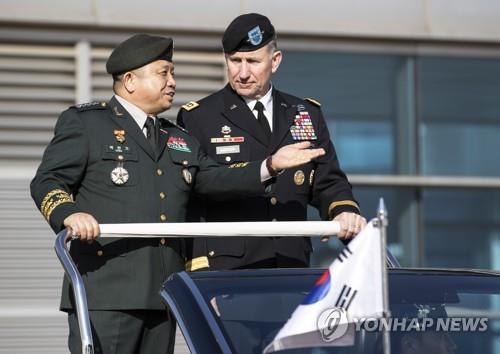