SEOUL, Sept. 17 (Yonhap) -- LG Chem Ltd., South Korea's leading chemical company, said Thursday it has decided to spin off its battery business in a move to further strengthen its leading position in the sector amid growing demand for electric vehicle (EV) batteries.

The new entity -- tentatively called LG Energy Solutions and will be wholly owned by LG Chem -- is set to be launched Dec. 1, LG Chem said in a regulatory filing.

"We believe it is the right time to spin off (the battery business unit) as the electric vehicle battery business began to yield a sizable profit amid the rapid growth of the battery industry," the company said in a statement released after an emergency board meeting.

LG Chem's battery business unit achieved an operating income of 155.5 billion won (US$132 million) in the second quarter on quarterly record sales of 2.82 trillion won, all record figures so far. 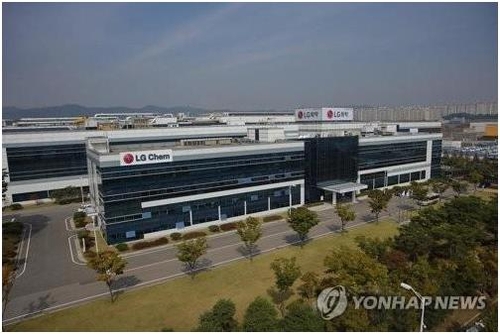 LG Chem said sales of the new entity could come to about 13 trillion won this year before reaching more than 30 trillion won in 2024.

LG Chem said it needs to secure massive capital for investment at a time when it spends more than 3 trillion won in facility investment per year.

LG Chem said it will study the possibility of an initial public offering of the new entity, though no decision has been made yet.

LG Chem was the largest supplier of EV batteries in the first seven months of this year with a 25.1 percent share, according to market tracker SNE Research.

SNE Research attributed the hike to robust sales of the Tesla Model 3, the Renault Zoe EV and others that are powered by LG Chem's EV batteries.