Marc Knapper, deputy assistant secretary of state for Korea and Japan, made the remark as he expressed hope for Seoul and Tokyo to mend their ties badly frayed over wartime history so as to promote trilateral cooperation for security in the region.

"Our three countries share the values of freedom of speech, freedom of assembly, freedom of press and religion. Frankly, these kinds of principles are under threat right now in the Indo-Pacific region," Knapper said via video link from Washington during a World Knowledge Forum session.

"The Chinese communist party has taken steps in recent years that are worrisome ... We have to find a way to cooperate, and we certainly hope that Japan and South Korea can find a way to address the differences related to history," he said during the forum hosted by the Maekyung Media Group.

The U.S. has stepped up calls for allies and like-minded countries to join its campaign aimed at keeping an increasingly assertive China in check amid an intensifying rivalry between the world's two major powers on multiple fronts including trade, technology and security.

While Seoul and Tokyo are locked in a long-running dispute over compensating Korean forced labor victims, Suga has indicated that he will keep the hard-line stance on diplomacy with Seoul as he pledged continuity with Abe's policy.

The wartime history issue has irked the U.S. after Seoul almost scrapped a bilateral military information-sharing pact with Tokyo last year in protest of Tokyo's export curbs. The U.S. considers the General Security of Military Information Agreement (GSOMIA) an important tool for trilateral cooperation with the two allies.

Knapper reiterated that point on Thursday.

"GSOMIA gets to the heart of why cooperation among our countries matters, because it involves information sharing, it involves trust, and in crisis, we have to be able to move and act quickly and respond. Something like GSOMIA would really play a key role of acting quickly to the crisis in the region," he said.

Asked whether the U.S. initiatives, such as the Economic Prosperity Network and the 5G Clean Path designed under its Indo-Pacific strategy, will continue even after the November presidential election, Knapper said he thinks they will. 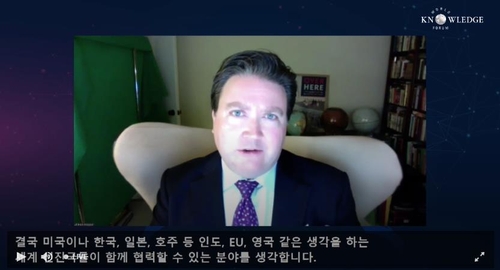