SEOUL, Sept. 17 (Yonhap) -- The driver of a South Korean sport utility vehicle involved in a deadly crash into a U.S. armored vehicle in Pocheon, Gyeonggi Province, last month has been found to be intoxicated and speeding at the time of the accident, police said Thursday.

On Aug. 30, the SUV rear-ended the U.S. armored vehicle at around 9:30 p.m. on a Hantan River bridge in Pocheon, about 50 kilometers northeast of Seoul, killing all four SUV occupants in their 50s and slightly injuring an American soldier in his 20s.

The victims were two Korean couples residing in Pocheon, who were returning home after attending a gathering. The U.S. military vehicle was returning to its base after a firing drill.

The Pocheon Police Station said it has been notified by the National Forensic Service that a blood alcohol level high enough to warrant license revocation was detected from the SUV driver's body in an autopsy. 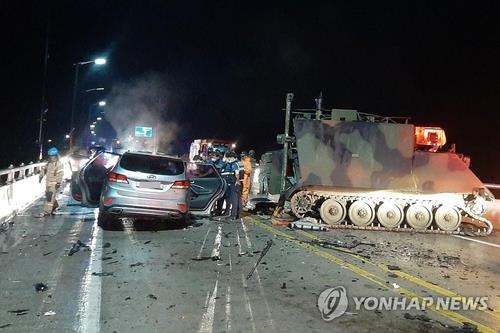 The police also said the SUV was driving at a speed of over 100 km per hour prior to the crash on the bridge where the speed limit is 60 kph. The speed was estimated based on the data recording device built into the airbag module and the dashboard cam image, they explained.

The police said another male passenger on the SUV, who handed over the steering wheel to the driver minutes before the crash, also exhibited a blood alcohol concentration punishable with license revocation in the autopsy.

It is difficult to find out exactly why the SUV drivers were changed at the last moment, but the police speculated that one had taken over the wheel from the other man after deciding that he was too drunk to drive properly.

"The drivers were changed just before the SUV entered the bridge. An analysis of roadside surveillance camera footage and other data indicated that all of the SUV occupants were not aware of the U.S. military vehicle slowing down in front," said a police investigator.

The police said they will also conduct further investigations into the possibility of negligence by the U.S. military vehicle, as there were no escort vehicles in front of and behind the armored vehicle at the time of the accident.