Trading volume was moderate at about 834 million shares worth some 13.9 trillion won (US$11.8 billion), with losers outnumbering gainers 655 to 200. 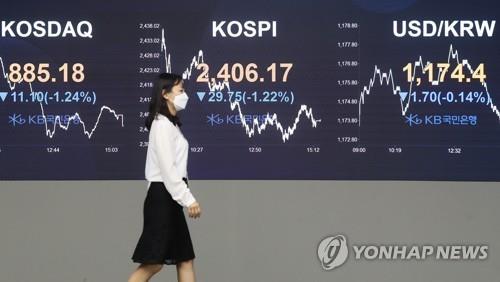 The KOSPI dropped for a second straight session on profit-taking.

Despite the U.S. Federal Reserve's signal to keep the near-zero rate till 2023, the local stock market remained bearish.

"The fact that the FOMC did not signal additional asset-buying seems to have disappointed investors who hoped for larger liquidity in the markets," Bookook Securities researcher Lee Won said.

The local currency closed at 1,174.4 won per dollar, up 1.7 won from the previous session's close.

Bond prices, which move inversely to yields, closed lower. The yield on three-year Treasurys added 0.4 basis point to 0.914 percent, and the return on the benchmark five-year government bond rose 0.9 basis point to 1.197 percent.