SEOUL, Sept. 18 (Yonhap) -- A record-low number of South Koreans are expected to visit their hometowns or travel during the upcoming Chuseok holiday amid the lingering coronavirus fears, a poll showed Friday.

In the survey of 1,000 adults nationwide conducted by Gallup Korea earlier this week, 81 percent said they do not have any plan to leave their homes for more than one night during the Chuseok holiday, the Korean version of Thanksgiving, which runs from Sept. 30 to Oct. 2 this year.

Koreans will enjoy five days off when the Oct. 3 National Foundation Day and Sunday are included. Chuseok, one of the country's biggest traditional holidays, serves as a chance for family members to visit their hometowns. 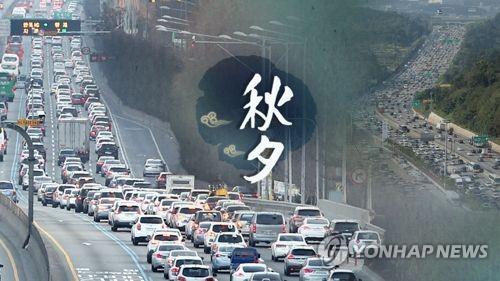 According to Gallup Korea, only 16 percent of the survey's participants revealed plans to visit their hometowns for longer than one night during this year's Chuseok, the lowest percentage since the pollster began such a poll in 1989.

Merely 1 percent said they plan to travel for more than one day during the upcoming holiday, the company noted.

Local quarantine authorities have expressed fears that massive population movement during Chuseok might pave the ground for further spread of the coronavirus pandemic.

"In the previous polls conducted over the past 30 years since 1989, more than 30 percent of Koreans spoke of plans to visit their hometowns for longer than one night. But this year, the ratio halved, possibly reflecting citizens' willingness to take part in the ongoing social distancing campaign over COVID-19," said a Gallup Korea representative.