(ATTN: UPDATES with details of survey in paras 10-15; ADDS photos)
By Woo Jae-yeon

The measure, which will remain effective until Oct. 11, was introduced following the relaxed social distancing guidelines amid a recent drop in new coronavirus cases. It also reflects worries over the widening learning gap.

High school seniors, who have been excluded from the government's school reopening measures, also switched to a mix of remote and in-person learning Monday, as they are wrapping up the normal academic schedule and seriously gearing up for the national university entrance exam slated for December. Schools are allowed to decide what form of instruction they will offer for high school seniors. 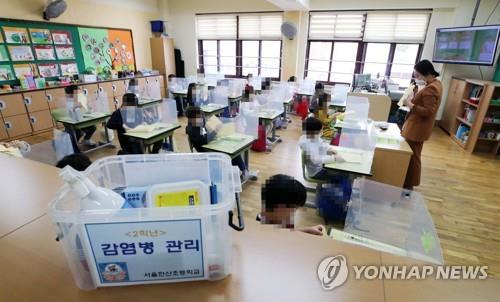 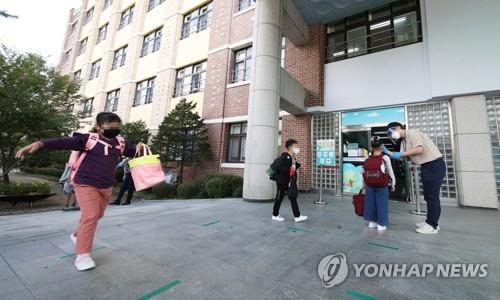 All students in the metropolitan area have been attending virtual classes since Aug. 26, due to a surge in virus cases. Earlier this month, the measure, originally scheduled to end Sept. 11, was extended until Sept. 20 to further tame the coronavirus.

Schools around the nation are required to run with antivirus limits. Attendance is capped at one-third in elementary and middle schools and two-thirds in high schools to guarantee social distancing.

But some regions with relatively small caseloads, such as Jeju Island, can relax the cap to less than two-thirds.

South Korea carefully instituted a phased reopening of schools, starting May 20, amid a slowdown in new cases. Since then, in-person school sessions have been on and off depending on the level of the pandemic. 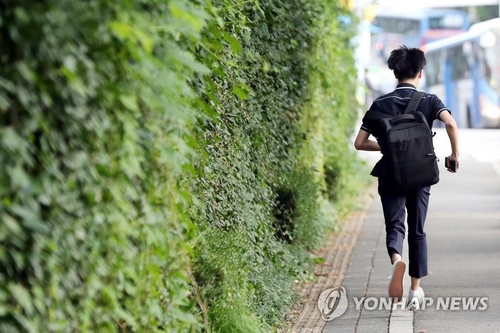 To enhance communication between students and teachers, online classes should run a two-way interactive session at least once a week, and have mandatory greeting sessions through instant messenger applications or web conferencing tools like Zoom. Teachers are required to talk with parents weekly, if virtual classes continue for a week or longer.

In a report released on Monday by the ministry, 79 percent of 51,021 teachers surveyed believed that a learning gap among students has widened and that it was mainly due to a difference in their self-directed learning capabilities.

Reducing the gap, the respondents said, required in-person instruction (37.8 percent), followed by the provision of an online platform to check up on individual competence and academic progress (31.18 percent).

The study was conducted online from July 29-Aug. 1, jointly by the ministry and the Korea Education and Research Information Service (KERIS), on a total of 857,000 teachers, students and parents.

The study also found that 68.3 percent of the middle and high school students thought remote learning was helpful while 31.67 percent did not.

Asked whether they were willing to continue offering remote instruction after the pandemic is over, 54.4 percent of teachers responded in the affirmative.

Guwol Middle School in Incheon reopened Monday in a phased manner, first for the third grade students, followed by the first graders and lastly the second graders. Each grade group comes to school once in three weeks to reduce crowding.

"It's been a month and a half since the last time I came to school. I don't feel as awkward as I felt in spring, but I am worried that it won't be easy to get used to (in-person learning) again," Kwon Jun-seo, a senior student at the school, said.

"The school's repeated opening and closing have been bad for preparing for exams," he said, adding, "I am afraid that it will have a (bad) impact on advancing to high school."

Another student, Choi Jin-hyuk, said "I had difficulties in focusing on online classes. ... I like meeting friends, but it was hard to get up early."

At the nearby Seokchun Elementary school, a total of 14 classrooms from the first and fourth grades reopened for around 450 students. All students wore masks, and school officials checked every student's temperature before they entered the school premises -- scenes repeated in all other reopening schools. 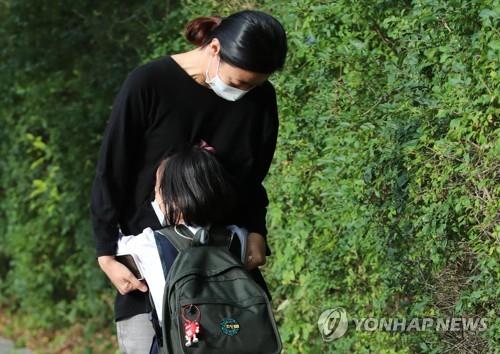 At Seoul Banpo Elementary School, a welcoming sign was seen hanging at the entrance where teachers came to greet returning students. About one-third of the total 819 students came to school.

But some obviously felt unsure about school safety. A parent was seen handing a teacher a document requesting for home learning. "I don't feel safe sending my kid to school even once or twice a week," the parent said.

Education Minister Yoo Eun-hae visited Hansan Elementary School in the east Gangdong ward in Seoul in the morning to check up on the resumption of the school.

"I understand that there are growing concerns over learning gaps. We will closely communicate with teachers and consult with chiefs of regional education offices to solve the issue," she said during a meeting with school officials.

The ministry said it will closely monitor the spread of the virus until the second week of October to decide on school reopening from Oct. 12. 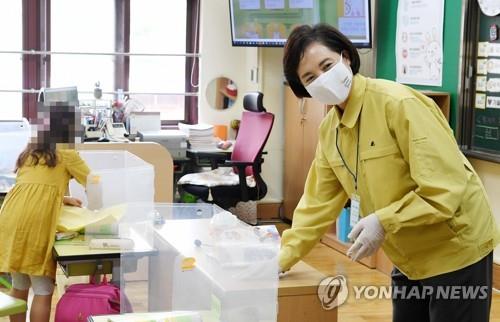 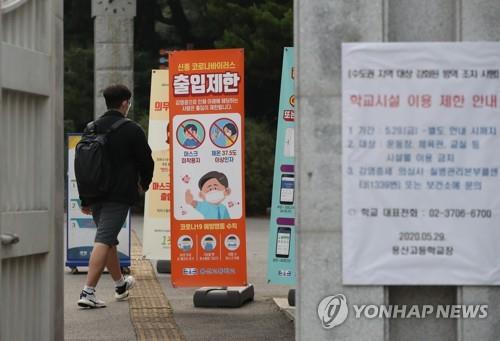