SEOUL, Sept. 21 (Yonhap) -- South Korean President Moon Jae-in emphasized Monday the importance of global cooperation, based on multilateralism, in the fight against the novel coronavirus.

"Solidarity and cooperation is a power unique to humans that a virus can never match," he said in a video speech during an annual United Nations meeting. "At the same time, it is the most potent weapon at our disposal that can defeat the coronavirus."

"Through global funding, we should facilitate advance purchase of sufficient doses of vaccines for international organizations to ensure that developing countries can also share in the benefits," Moon said, addressing the high-level meeting to commemorate the 75th anniversary of the U.N. 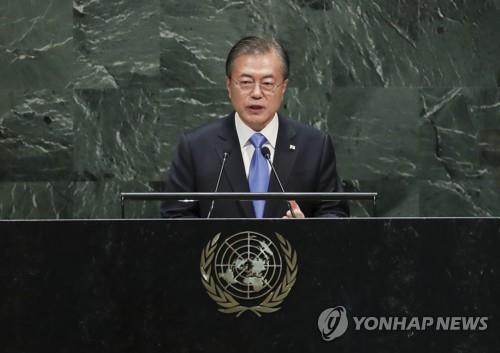 He was speaking in his capacity as the leader of the country chairing the group of five middle powers, dubbed MIKTA, this year. The other four are Mexico, Indonesia, Turkey and Australia.

He pointed out that South Korea is home to the headquarters of the International Vaccine Institute, reaffirming its commitment to "active support to various activities" to provide developing countries with vaccines.

"Second, we must restore multilateralism to the international order," he stressed. "Together with infectious disease prevention measures, this will be the driving force of global economic recovery."

The ongoing COVID-19 pandemic is threatening to undermine the spirit of multilateralism embodied by the U.N., he noted.

The president reminded the U.N. members of his suggestion during the virtual G-20 summit earlier this year that countries allow the essential cross-border movement of people, including business travelers, despite border controls in place against COVID-19.

He then said the international community should strengthen partnerships on the climate issue.

"I hope more countries will participate in the Global Green New Deal Solidarity which seeks to address the climate crisis while creating jobs and enhance inclusiveness at the same time," he said.

South Korea plans to host the P4G summit next year. P4G stands for Partnering for Green Growth and the Global Goals 2030, a public-private initiative to tackle climate change and other sustainable development challenges.

Moon made clear that the five MIKTA members view "unity, solidarity and cooperation" as the key to responding to the virus.

He cited their agreement to play a bridging role between developed and developing nations, as well as among regions, and also to promote multilateral cooperation.

As a cross-regional and innovative partnership, MIKTA pledges to play a leading role in facilitating recovery in a way that reduces disparity, builds back better and realizes an inclusive community that leaves no one behind, he added.

Later this week, Moon is to deliver a pre-recorded address at the virtual session of the U.N. General Assembly, in which he's expected to make peace overtures toward North Korea.