SEOUL, Sept. 22 (Yonhap) -- Pitching in South Korea for the first time this year, Aaron Brooks has done all the good things a starting pitcher is supposed to do: consistently going deep into games, inducing plenty of groundballs for easy outs, striking out his share of batters, walking very few and keeping the ball in the yard.

And whenever he takes the mound for the Kia Tigers in the Korea Baseball Organization (KBO), Brooks tries to keep things simple, by throwing strikes and staying ahead in the count. 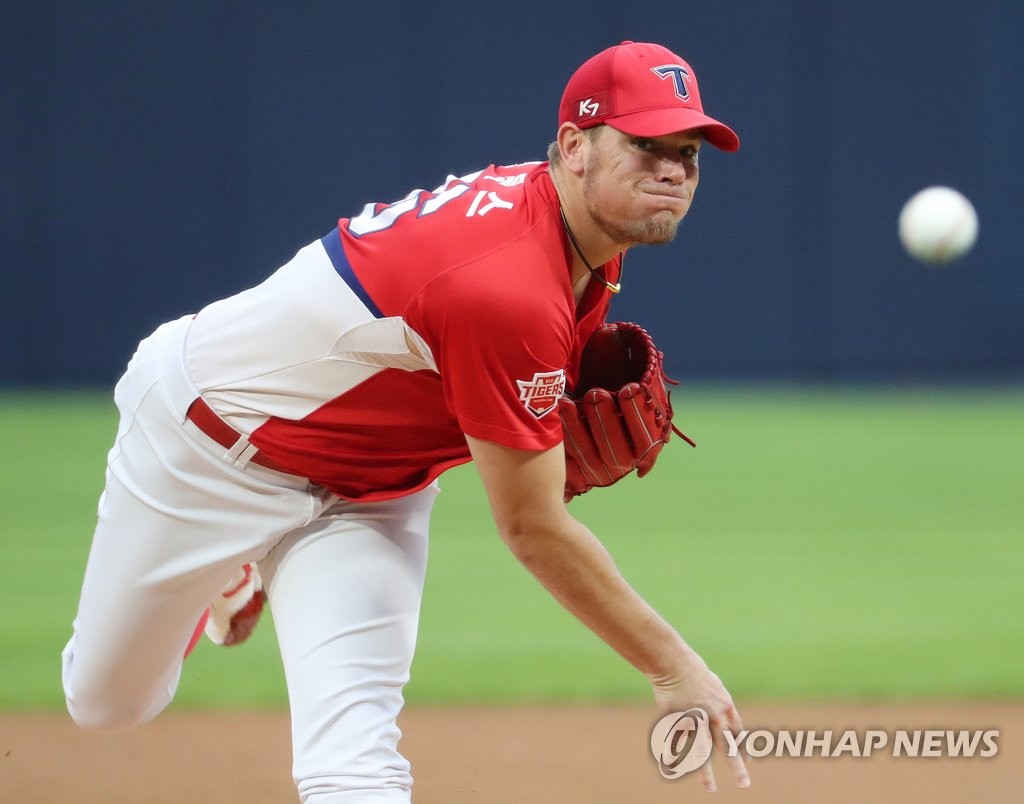 That has translated into a dominant first season in the KBO for Brooks, who is at or near the top of the leaderboard in many pitching categories. Hey, it can be so easy, this baseball thing.

If only it were that simple. The former major league right-hander is making this difficult game look easy, which is what great ones do. And that, in turn, makes it difficult to look away from Brooks when he's pitching.

"For me, it's just throwing strikes, which I've always tried to pride myself on doing my whole career," Brooks told Yonhap News Agency in a phone interview Monday, when asked about keys to his success. "I've been able to trust that every pitch that I throw, no matter what type of pitch it is, I am going to throw a quality strike. No matter how good or bad your pitches are, as long as you get ahead, I think you have the upper hand."

No starter has thrown strikes as often as Brooks, who leads the KBO in strike percentage with 69.3 percent, 5 full percentage points better than the league average. 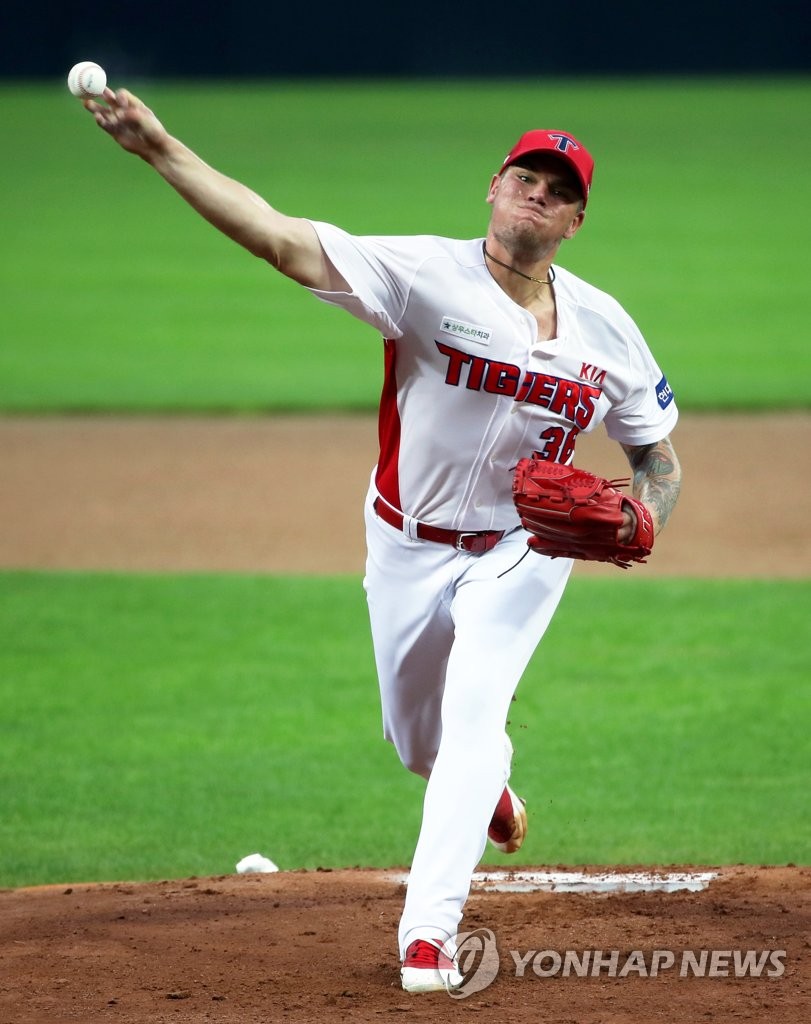 Among some traditional statistics, Brooks is second in ERA with 2.50 and walks and hits per innings pitched (WHIP) with 1.02. He is tied for second in innings pitched with 151 1/3. At 11-4, Brooks is tied for fifth in wins and is third with 130 strikeouts. Brooks has made 23 starts this year, and he has given up more than three earned runs only three times.

Now, for some geeky stuff: Brooks leads all KBO starters in the groundout-to-flyout ratio with 2.86. He's also first in opponents' on-base plus slugging percentage with .564. The strikeout-to-walk ratio of 5.42 places Brooks in second place. While inducing so many grounders, Brooks has surrendered just four home runs all season, for just 0.24 homer per nine innings, the second-lowest number in the KBO. With 24 walks issued, Brooks is third in both walks per nine innings with 1.43 and walk rate -- walks divided by total batters faced -- with 4.1.

With a devastating mix of sinkers and sliders, not to mention four-seam fastballs that sit around 150 kph (93.2 mph), Brooks has missed a ton of bats. He ranks third with a 24.7 percent whiff rate, or swinging strikes per swing. 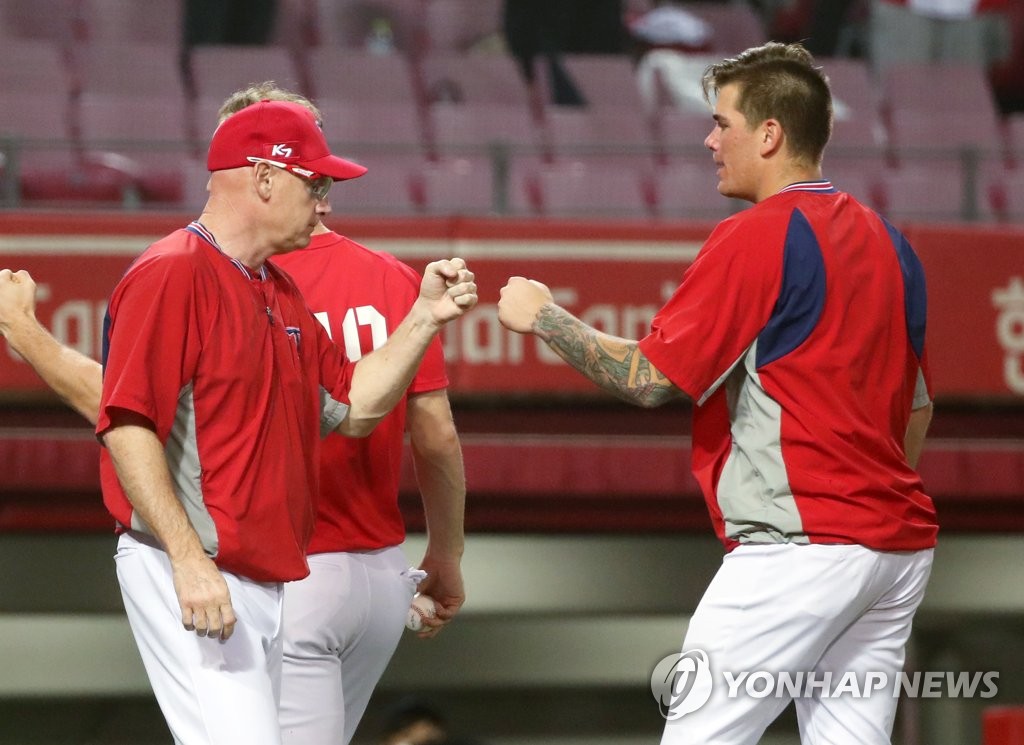 The list can go on and on. In wins above replacement (WAR), which has become the go-to metric in modern baseball to evaluate players, Brooks leads everyone -- pitchers and position players -- with 7.13. This means the Tigers have won about seven more games than they would have if a pitcher of replacement-level ability had pitched in Brooks' innings.

Brooks said he didn't pay much attention to his own statistics in the past because he didn't want numbers to distract him from his game plans. This season, though, Brooks admitted his WAR "has been cool to see" and that he has also been keeping tabs on his walk totals "to make sure I keep them low."

Brooks also said he and Lotte Giants' ace Dan Straily, who is near the top in many of the same categories as Brooks, have developed a budding rivalry.

"Straily and I have had a good, friendly competition this year with ERA," said Brooks, slightly ahead of Straily (2.78) in that category. "I've been checking in a bit here and there with that. But I just try to go game to game and not really get too wrapped up in the stats."

One category that Brooks wants to top the KBO is innings pitched, for he takes great pride in his ability to go deep into his starts and give the Tigers a chance to win. He has yet to throw fewer than five innings this season. Ironically enough, Brooks' shortest start of 2020, a five-inning performance against the KT Wiz on June 10, was his first complete game shutout. That game was called after five innings due to heavy rain. 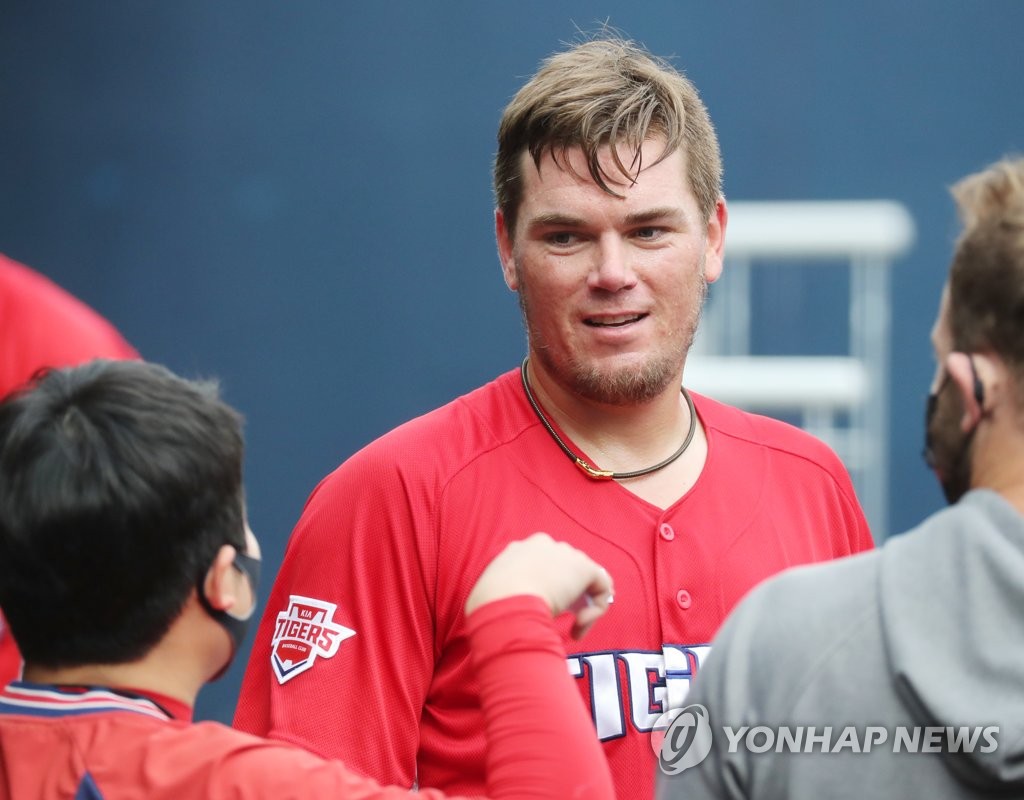 "If I get a lot of innings, it obviously means all the innings that I am throwing are going well, and my pitch count stays low for the most part," said Brooks, tied for the league lead with 6 1/3 innings pitched per start. "That's a starter's job: to keep the team in the game as long as possible."

Back in April, Brooks had told Yonhap that coming to the KBO wasn't an easy decision to make because he was living out his childhood dream of playing in the majors. He didn't really know what to expect from life in a new country and career in a new league. He credited people around him with putting him and his family at ease, which has helped him stay focused on the mound.

"That was my main concern, being able to adapt," Brooks said. "Ever since my family came over, everyone has been super nice. And I think that plays a big part in (my) being able to perform on the field. I just kind of go out there every five or six days and try to give our team the best chance to win, and be as good as I can be."

One particular person that has eased Brooks' transition is his own manager, Matt Williams. Brooks pitched for the Oakland Athletics in 2018 and 2019, while Williams was the team's third base coach. The two also share the same agency. 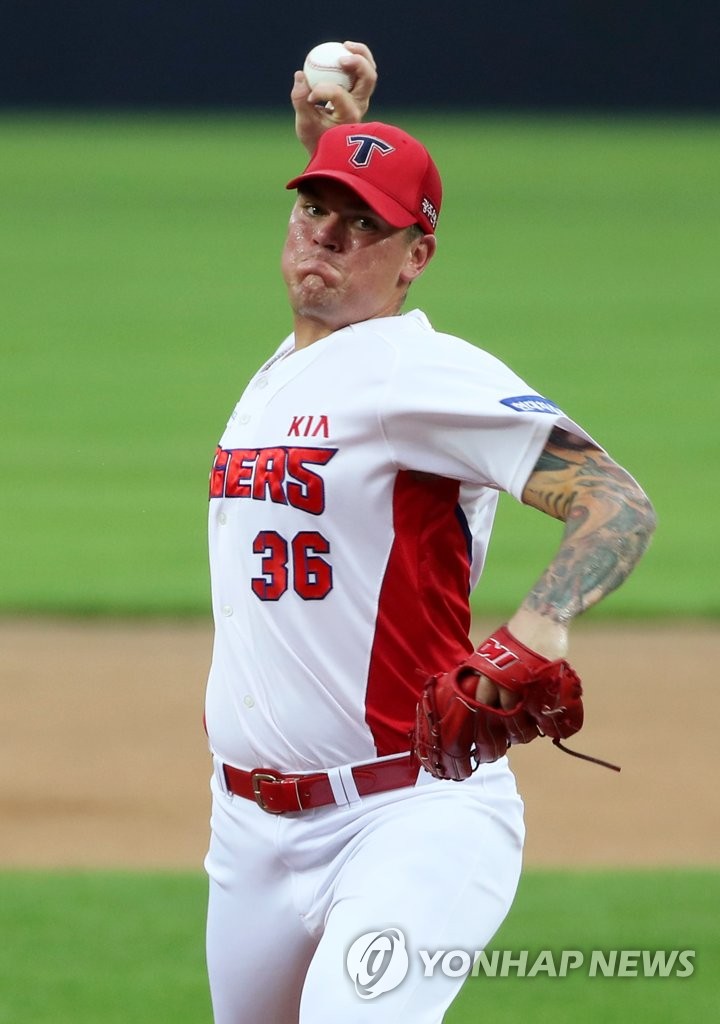 Brooks said Williams has been "pretty easy going" and lets players do what they need to do to get ready for games.

"On the field, if we're not crossing paths too much, then I guess I am doing my job," Brooks said. "He lets me go out there and do my job. I think it's been great."

But nothing could have prepared Brooks -- or anyone, for that matter -- for the coronavirus pandemic that has turned the world upside down this year. Having two young children with energy but nowhere to burn it other than their home has been "a big challenge" away from the field, Brooks said. And with concerns of infections keeping fans out of the ballparks for most of this season, pitching in front of empty seats has been a whole new experience for Brooks.

"There definitely is another gear (inside players) when there are fans that are cheering you on," he said. "It's unfortunate because I've heard so many great things about the fans and atmosphere in the stands. It does feel like more of practice games. It's tough, but you have to find your inner fire and know that games matter, and you have to give it your all." 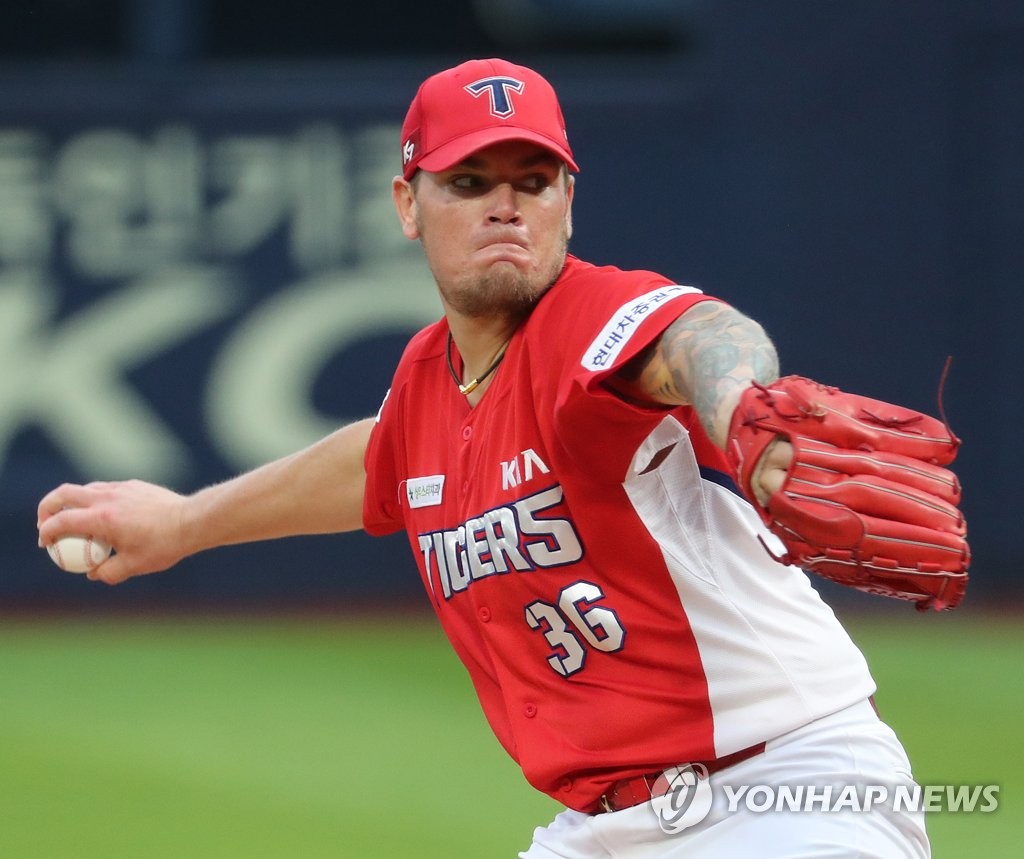 Thanks in large part to Brooks' consistent excellence, the Tigers are in the thick of a tight playoff race. They entered Tuesday's action in sixth place at 59-50, only half a game out of the fifth and final playoff spot with 35 games left.

"I think if we can get into the playoffs, we have a really good chance of advancing," he said. "As long as there are no injuries, anything can happen."

But if the Tigers don't get it done this year, maybe Brooks will be back next year for another go.

"I've been all over the place with different teams. I know baseball can definitely take you places you never thought you would go," Brooks said. "I'd mostly definitely love to come back to Kia. I've enjoyed my experience here. There wouldn't be a reason why I wouldn't want to come back." 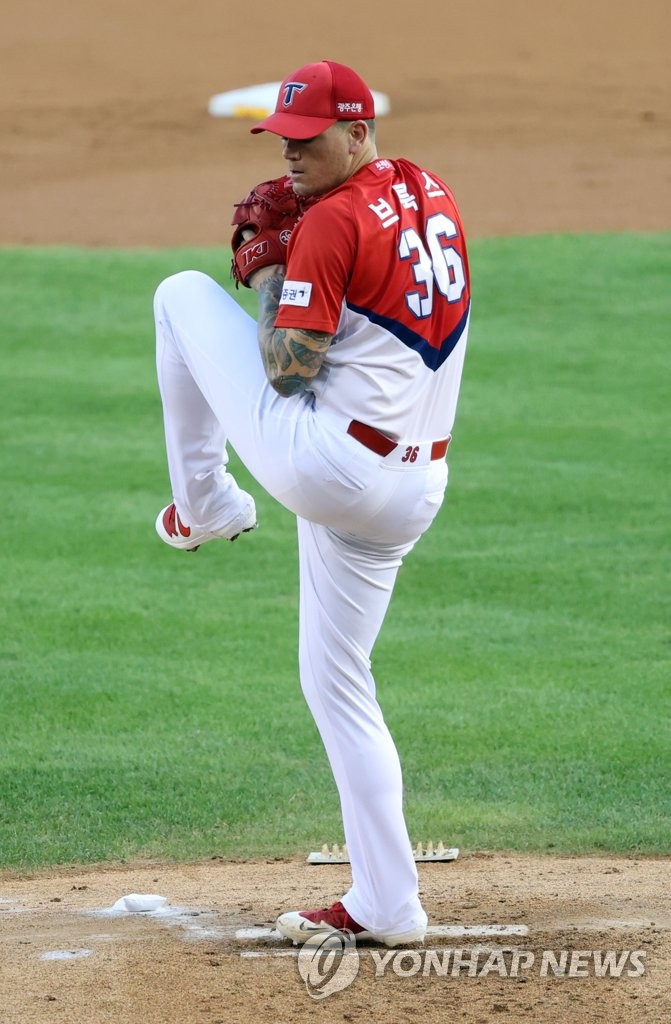